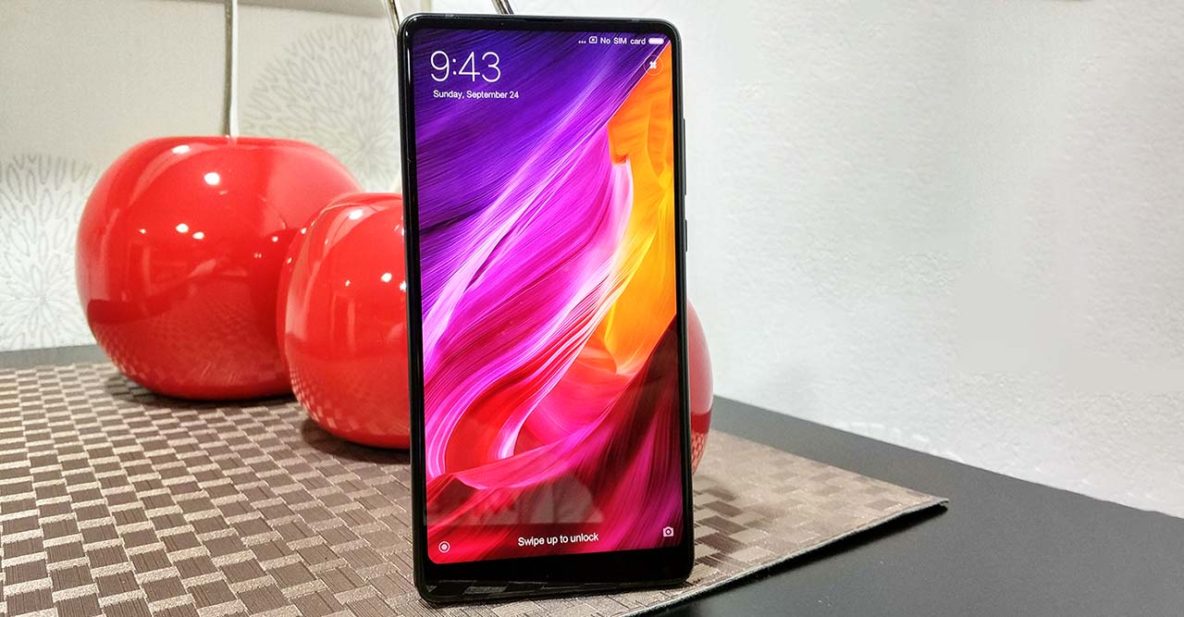 ON September 15, I was able to snag a Xiaomi Mi MIX 2 (6GB of RAM/128GB of internal storage) before it got sold out in 58 seconds. The smartphone is the successor to the highly popular Mi MIX, which was also designed by renowned French designer Philippe Starck.

(The author, whose passion is to review whatever Xiaomi releases, is a contributor at Revü Philippines.)

This time around, Xiaomi has removed the Pizzo Electric method of transferring sound to the ears, as some users had complained the sound was not as loud as that of a dedicated conventional earpiece. The weight has been trimmed down as well. Join me in my review of the Mi MIX 2.

My unboxing of the Xiaomi Mi MIX 2 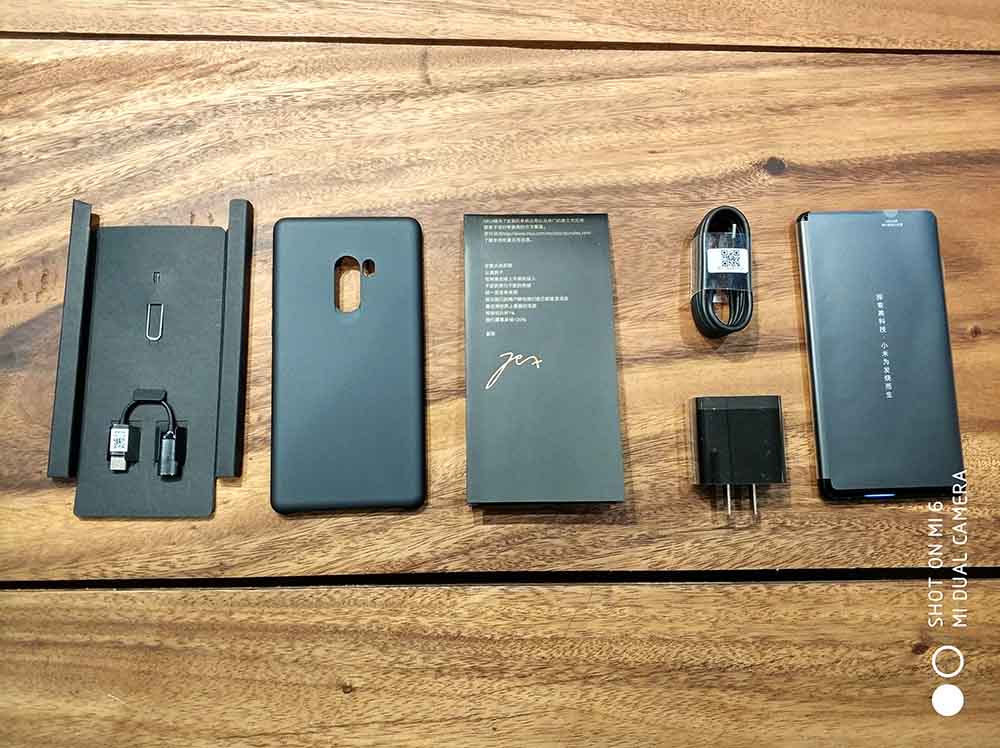 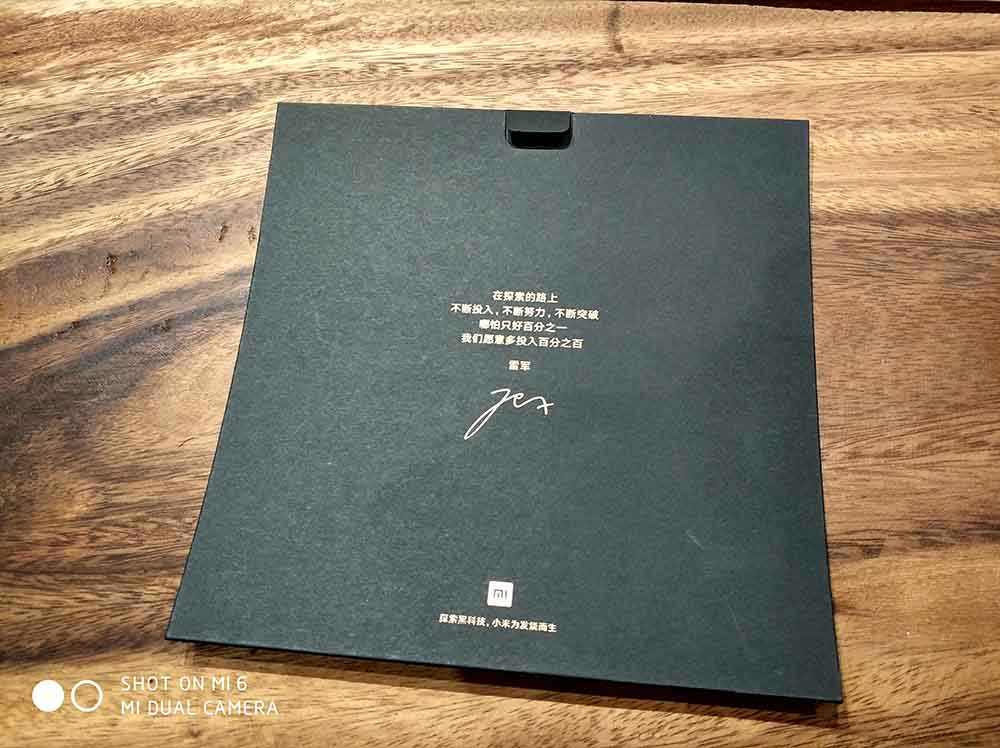 A message from CEO Lei Jun: “We continue to put in our 100 percent effort, to invest and break through on the journey of exploration, regardless of the result.”

The Mi MIX 2 has a design like no other. It has inherited the bezel-less display of the original Mi MIX, but it’s now curvier along the corners. The screen size has gone down from 6.4 inches to 5.99 inches — a good move to cut its weight. And when placed side to side with the 5.5-inch Xiaomi Mi A1, the two are about the same size. Which means you are getting an almost-6-inch display in a 5.5-inch body. Awesome, isn’t it?

However, the downsizing of the battery from 4400mAh to 3400mAh probably isn’t good because a big screen tends to eat much more energy than normal-sized phones. The embossed camera on the back is a negative for me as well, as the camera lens is now prone to scratches.

The Xiaomi Mi MIX 2 has a ceramic back, just like its predecessor. That means the rear is a fingerprint magnet, too, that’s why they included a black hard case; it’s to keep you from wiping and wiping the marks off the phone. This is simply more practical than the leather case included in the original Mi MIX, which is quite hard to use. 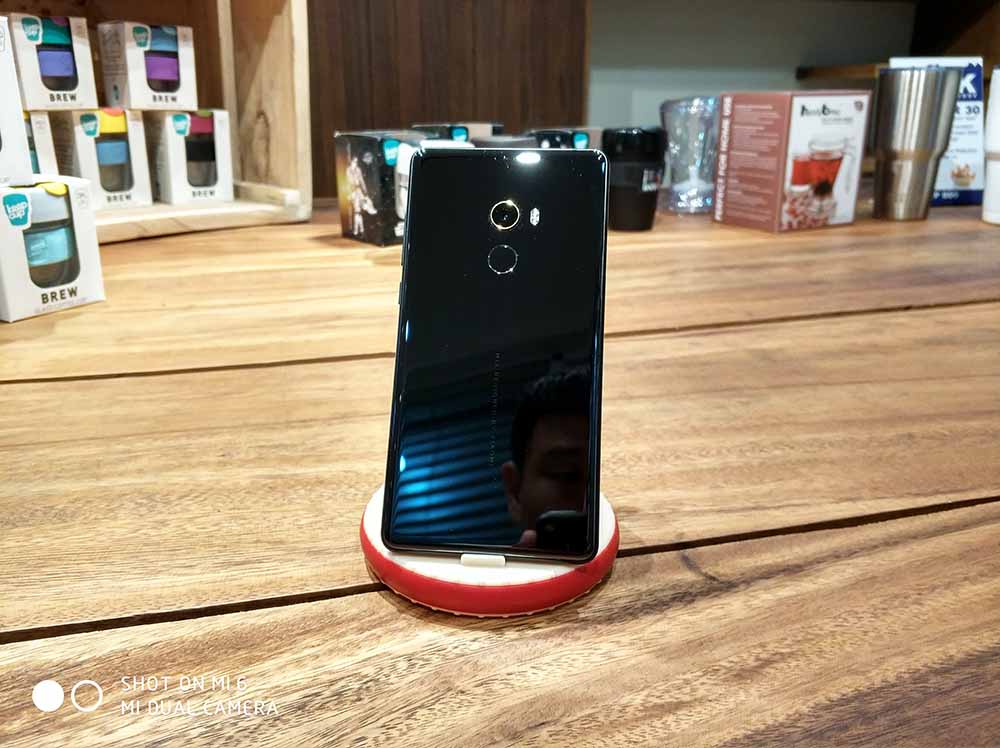 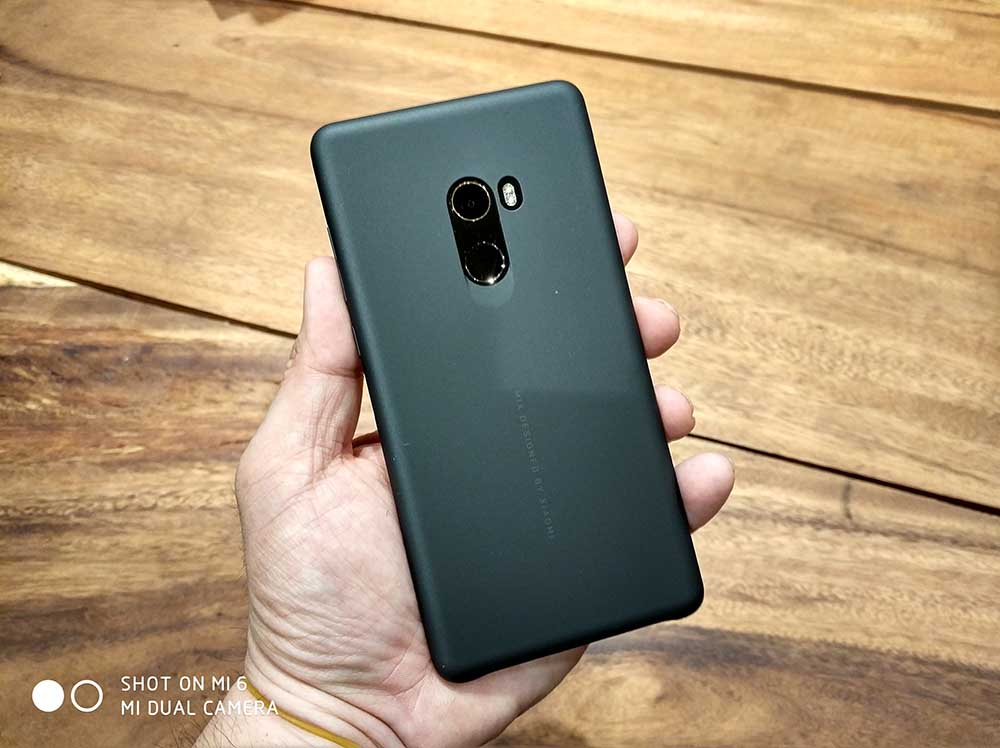 …so Xiaomi threw in a black hard case.

Above the frame is a noise-cancellation mic. Sadly, there is no more 3.5mm audio jack. On the right side are the usual volume up and down buttons and the power key.

On the back is an embossed Sony IMX 386 12-megapixel camera with 18K gold ring outside of it. Below is the fingerprint scanner, which is fast to respond. There is also the dual-LED flash beside the camera lens. 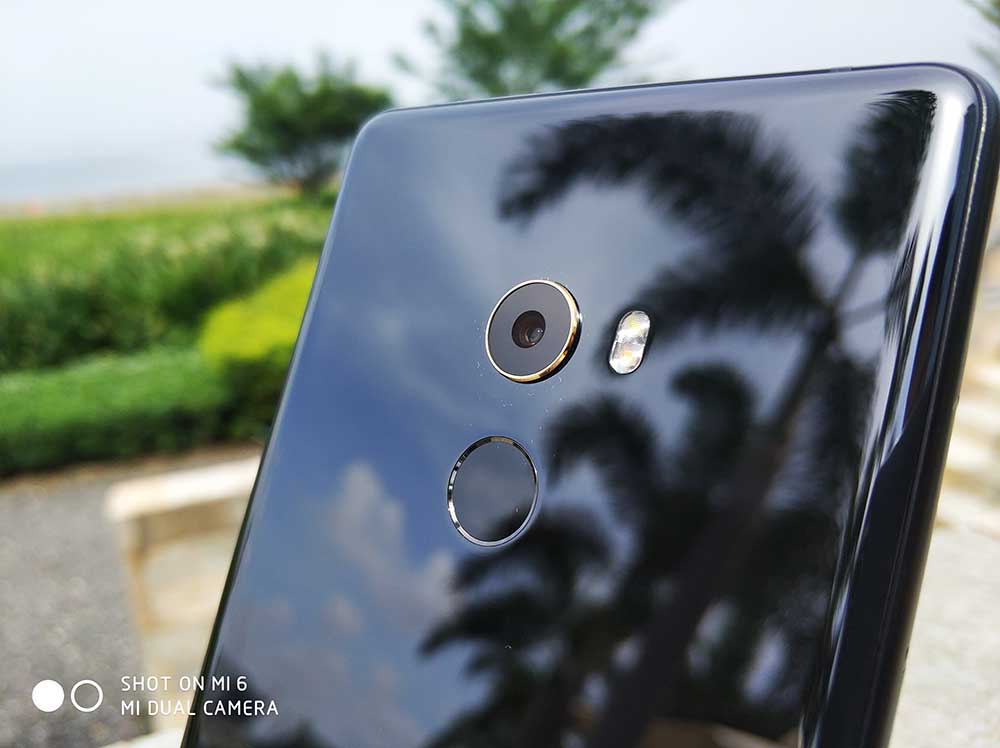 The left part sports a SIM tray that can hold two nano-SIM cards. And below the phone is a USB Type-C charging port as well as a loudspeaker and mic holes.

I had expected a lot from the display because I was impressed with the Mi MIX. I was not disappointed. The Xiaomi Mi MIX 2’s screen is even better than its predecessor, even under bright sunlight. I’m glad the company didn’t switch to AMOLED. 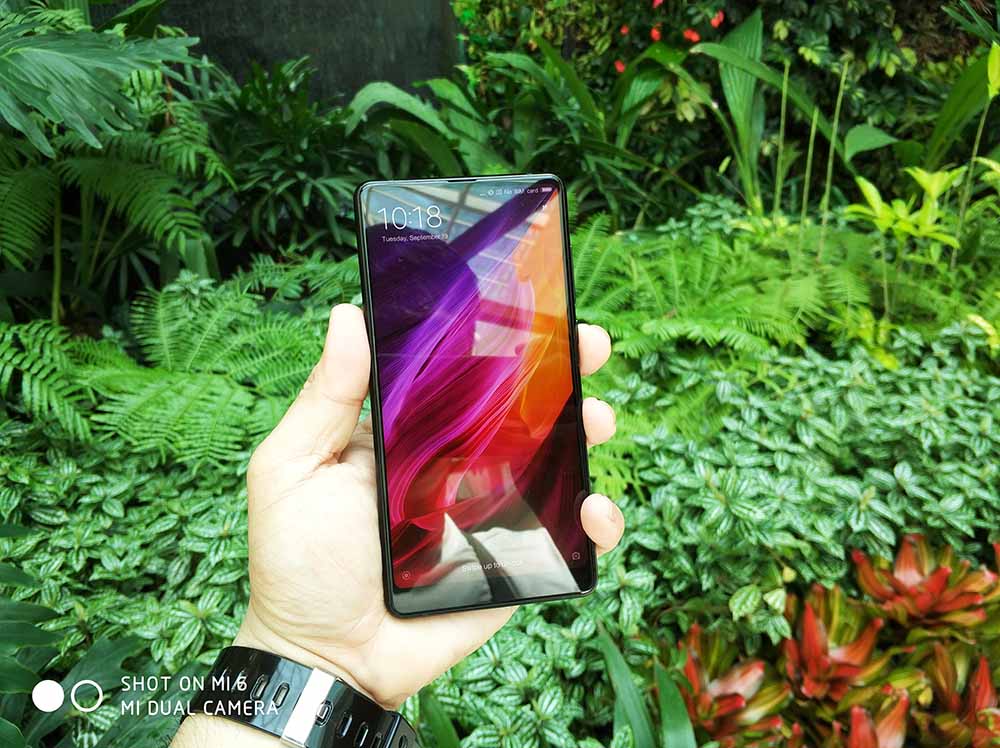 I watched shows like Dragon Ball Super and Train to Busan on the smartphone, and my experience was superb because of the display. The sound was excellent; I had no problem kicking the sound to max inside a room of roughly 8 square meters.

The Xiaomi Mi MIX 2 sports the latest chipset from Qualcomm. The Snapdragon 835 has eight cores and can run up to 2.45Ghz of computing speed. Paired with a powerful Adreno 540 GPU and a generous serving of 6GB RAM, it will give you the best experience in gaming. I played games like NBA 2K17 on the phone, and everything was pretty smooth. I did not experience any lag.

I ran several stress tests on this unit and did not see any delays in the opening of apps either. Multitasking was a breeze. The system-on-a-chip already supports 64-bit architecture, which means it can compute fast.

Anyhow, let me just share with you the benchmark score I got in Antutu. 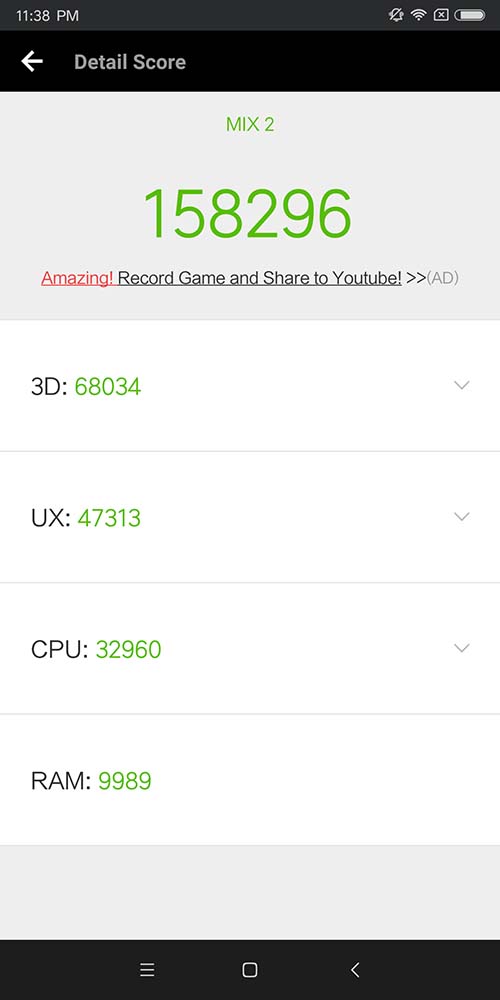 READ ALSO: Xiaomi Mi Note 3 is a bigger Mi 6, but with less power

It’s pretty easy to switch to LTE in Settings, but once you do, the second SIM card will run on GSM connectivity only. You can freely choose which SIM card you want to use for your LTE data, as the Mi MIX 2 is a dual-LTE, dual-standby smartphone.

This unit supports multiple-carrier aggregation technology. Should your network provider have this feature, you can take advantage of it. Wireless connectivity via Wi-Fi a/b/g/n/ac is stable.

The Mi MIX 2 also supports Wi-Fi Direct, and wireless screen mirroring is available via Miracast. Tethering data works perfectly. Bluetooth 5.0, GPS, and Glonass are all present. NFC is included, too, as Xiaomi gears toward Mi Pay and Android Pay. Transferring data from older phones using Mi Mover is a breeze as well.

The Xiaomi Mi MIX 2 camera isn’t as great as the Xiaomi Mi 6 and Mi Note 3, both of which have dual cameras. But its 12-megapixel cam can still capture good photos — just not that good in low-light areas. Still, the Sony IMX 386 sensor is a huge, huge improvement over the Omnivision sensor on the back of the first Mi MIX.

Xiaomi has incorporated a 4-Axis optical-image stabilization into this phone, so expect good shots in motion photos. The manual mode, by the way, has an exposure time of 32s and ISO of 3200.

The front snapper is a regular 5-megapixel camera, but still takes great selfies. 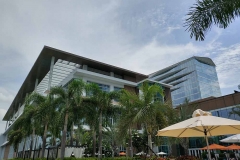 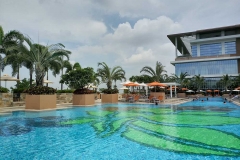 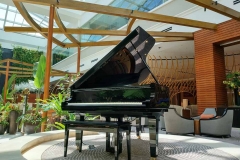 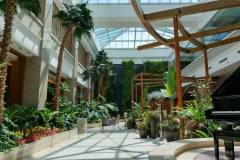 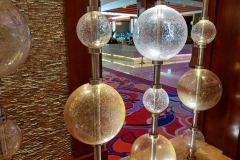 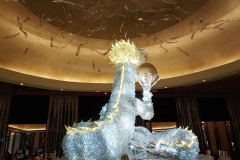 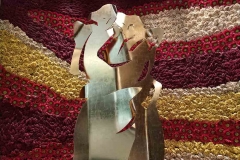 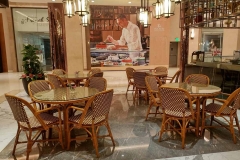 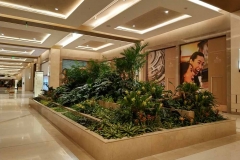 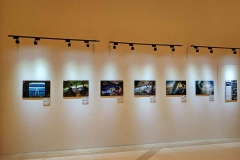 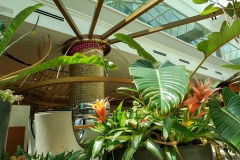 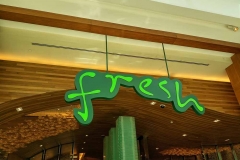 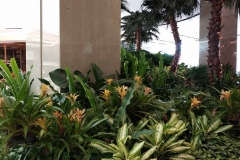 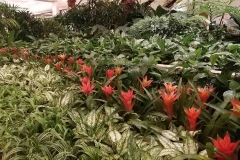 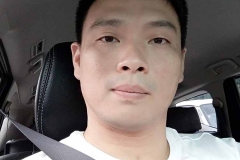 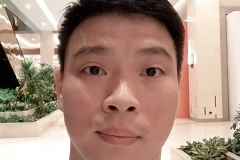 The Mi MIX 2 has a pretty good battery life for a phablet-sized smartphone. It supports the Qualcomm Quick charge 3.0 and takes in 3.2 Amperes based on my testing using the supplied charger and cable.

I recorded 10 hours and 9 minutes in the PC Mark battery stress test, a good sign for the said smartphone, but still down from the Xiaomi Mi MIX’s average of 12 hours. Putting a 3400mAh into a slim unibody is not easy, but it’s still a disappointment coming from the original’s 4400mAh battery. 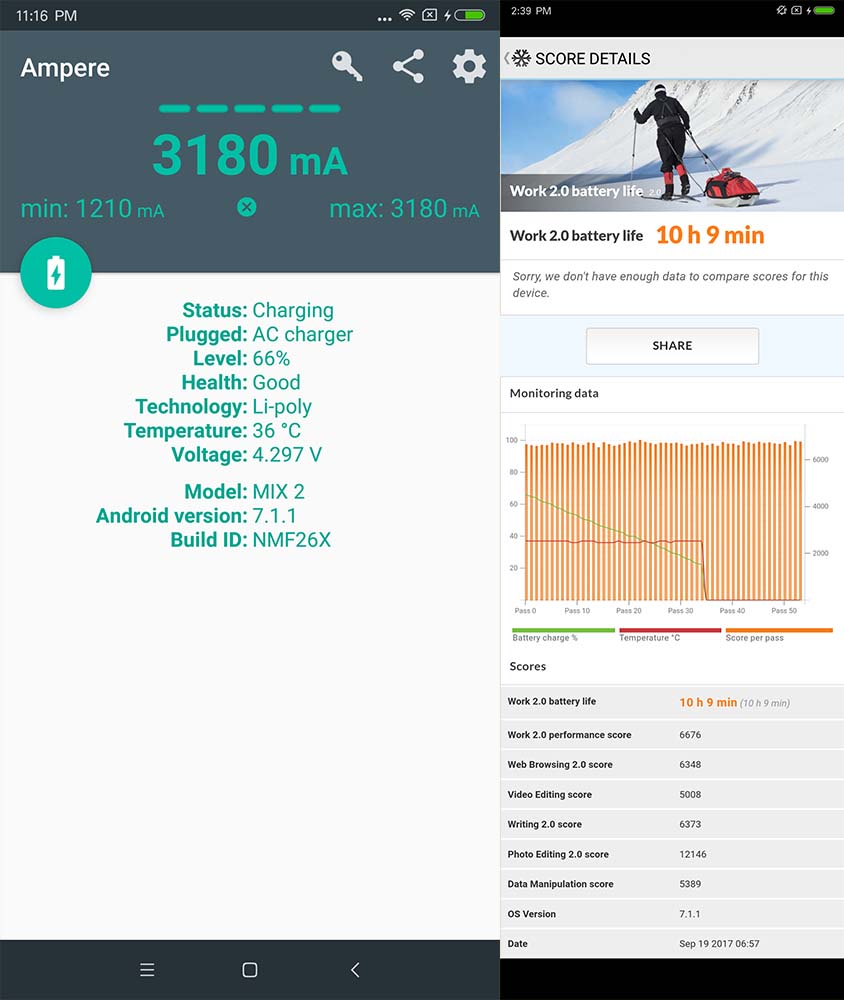 Final thoughts: Xiaomi Mi MIX 2, powerful inside and beautiful outside

In my opinion, the Xiaomi Mi MIX 2 is better-looking than the iPhone X. The cutout at the top of the Apple smartphone’s display makes it look unappealing. Xiaomi was able to do away with it.

Overall, the Mi MIX 2 is pretty good to use. The company did listen to its fans and improved on the new design of the original Mi MIX. The round edges and the lighter weight (205 grams to 185 grams) are plus points; so is the Sony IMX 386 camera sensor.

I’m still amazed by the partnership between Xiaomi and Philippe Starck. Hopefully, they can come up with more awesome phones in the future. 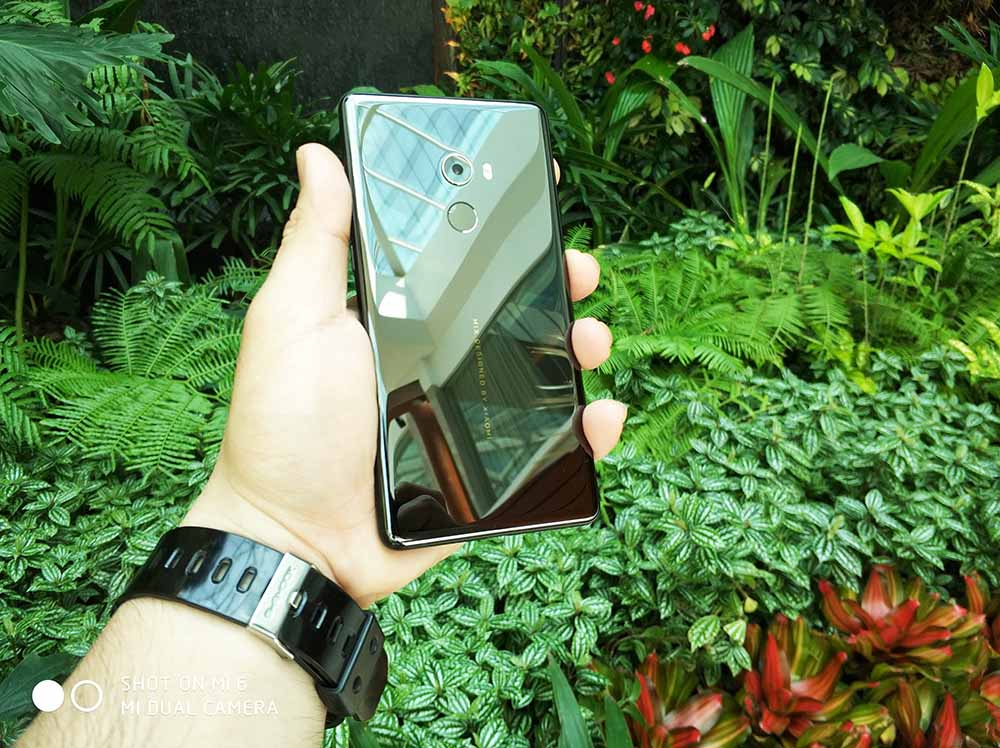 The Xiaomi Mi MIX 2, powerful inside and beautiful outside