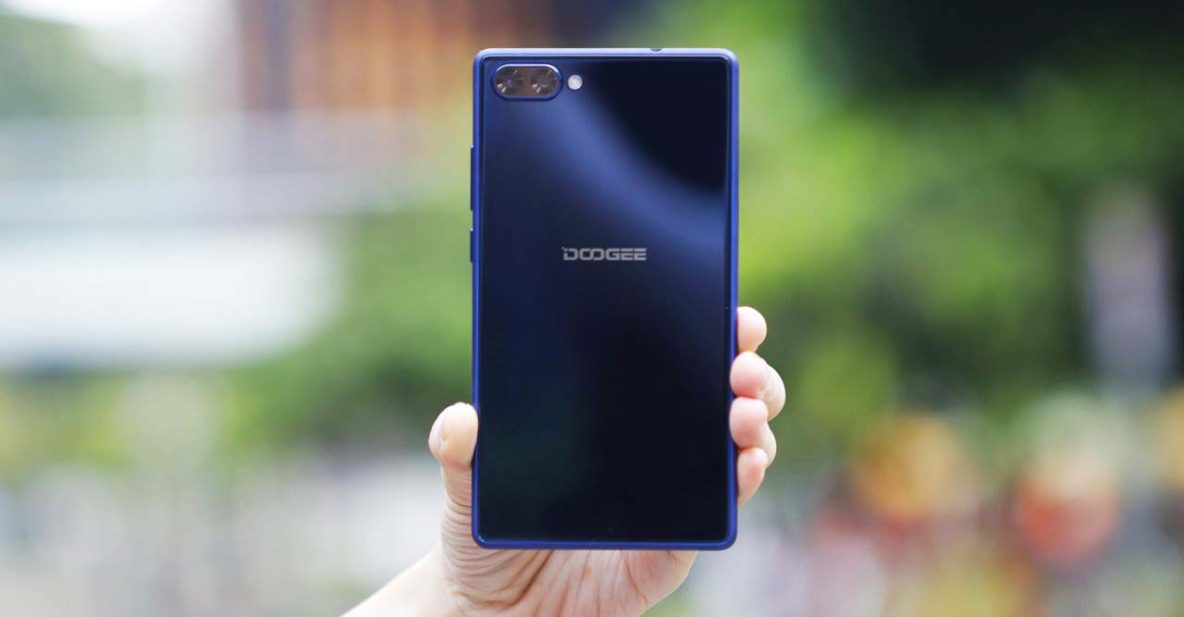 HARDLY anyone pays attention to upstart Chinese brands in outside markets, but when something like the Doogee Mix comes along, one can’t be blamed for sitting up and taking notice.

Sure, it bears more than a passing resemblance to the Xiaomi Mi Mix. We don’t know if it’s by design or by happy accident. But Doogee’s biggest triumph with the Mix, its Mix, is the fact that it came out with an almost-bezel-less phone that has great features, at a price that won’t put a hole in your pocket. 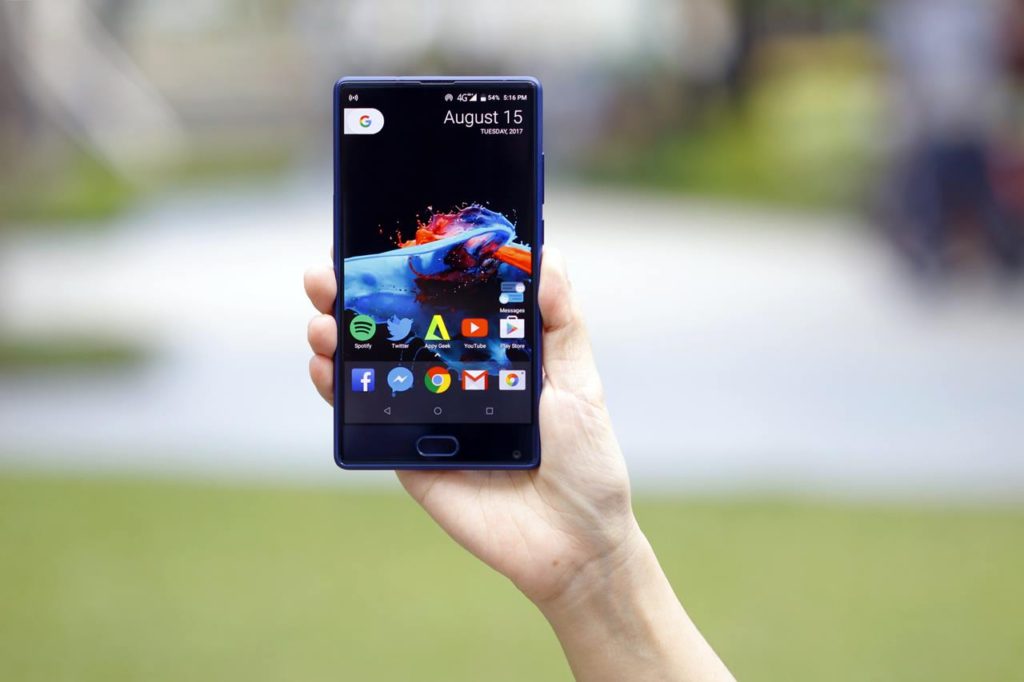 Doogee’s biggest triumph with the Mix is the fact that it came out with an almost-bezel-less phone that has great features, at a price that won’t put a hole in your pocket.

We don’t think we can ever hold it against anyone for seeing the Doogee Mix as a unicorn of sorts. It’s got an almost edge-to-edge display, as well as the computing guts underneath it to juggle all the apps you throw at the device; the dual-camera system (seemingly) takes inspiration from the Apple iPhone 7 Plus, one of the best ever to get the job done.

And then there’s the price: P12,995 (officially), which is approximately $252, for the version with 6GB of RAM. That’s not a typo. The Doogee Mix indeed checks all the requisite boxes — confidently, might we add — of a smartphone rarity.

We can’t hold it against anyone for seeing the Doogee Mix as a unicorn of sorts. It has computing guts and an almost edge-to-edge display. And then there’s the price: P12,995 (around $252) for the version with 6GB of RAM.

That is, until you come to the realization that it doesn’t, it isn’t, and things are far from ideal — shortly after the first boot. It turns out the Doogee Mix is a mirage that hides an ugly software problem. Fortunately for the Chinese upstart, that problem can be fixed without too much intervention. Even so, an update is badly needed.

But all is not gloom and doom for the Mix. We concede it’s a very good phone from a hardware perspective. One only has to experience it firsthand to appreciate it. Few will argue against the Mix’s “metal frame sandwiched by glass” exterior and its lack of bezels up top and on either side. 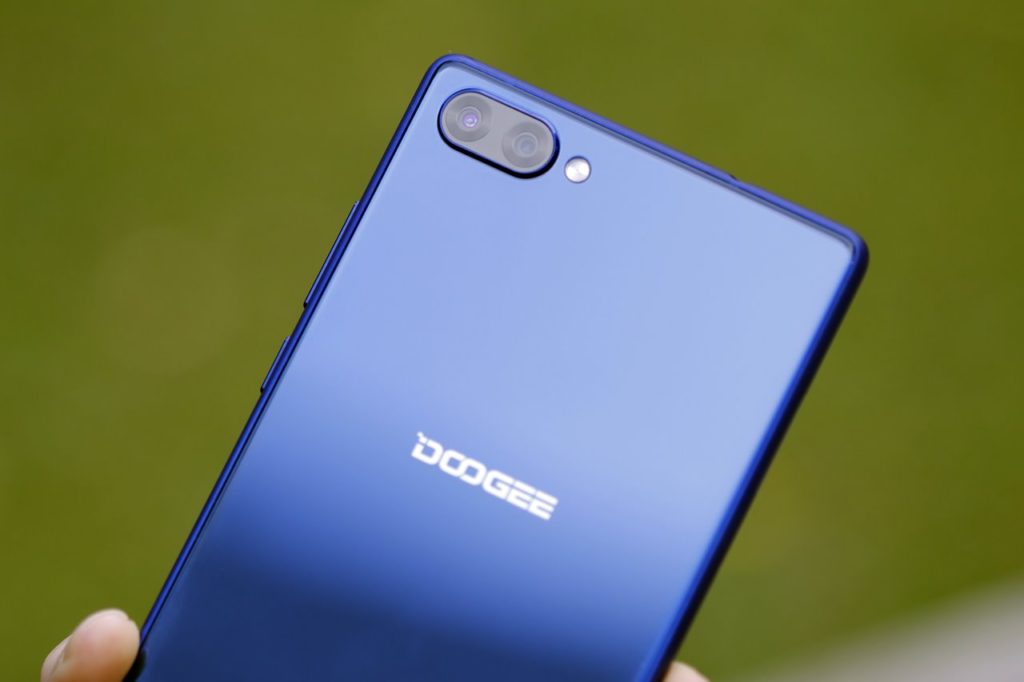 We concede it’s a good phone from a hardware perspective.

As with Xiaomi, Doogee doesn’t completely get rid of the bezels that go around the display. Still, making the effort to do so is commendable, to say the least. The earpiece, the sensors, and the front-facing camera — they have to go somewhere on the front of the device, obviously.

Two glass panels cover the front and back, and, as one would expect, they do get in the way of maintaining the phone’s pristine appearance. Speaking of, Doogee has thrown in a basic snap-on plastic case in the package with the Mix, which lends a secure grip and keeps fingerprints and smudges off the glass rear.

We love it when manufacturers take the time to save us a trip to the mall or online store. Also: We don’t imagine third-party companies are getting in line to make protective cases for the Mix, or any Doogee phone for that matter.

Handling is another aspect of the device that deserves a brief attention. That the 5.5-inch Doogee Mix is about as tall, and just as easy to operate single-handed, as most 5-inch phones on the market is remarkable.

Compared to some other 5.5-inchers — take the fan favorite iPhone Plus models, for example — this looks puny, which is a good thing. Do note, however, that it is a little heavy, thanks in part to the solid metal skeleton that holds everything together. The weight seems to be distributed evenly around the edges. 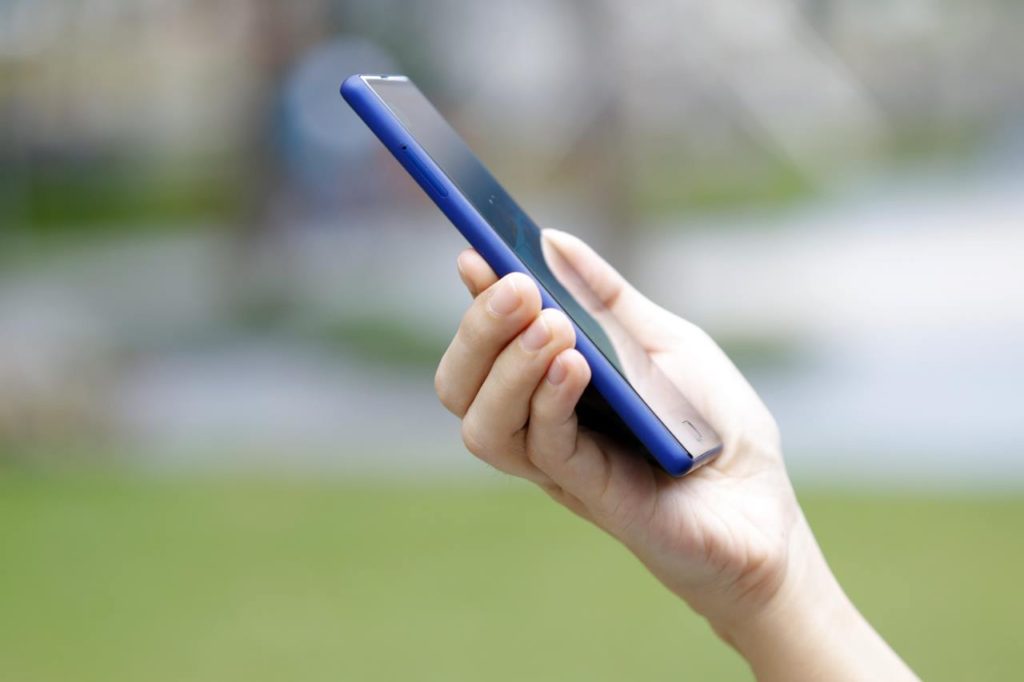 Compared with some other 5.5-inchers — take the fan favorite iPhone Plus models, for example — this looks puny, which is a good thing.

About the AMOLED screen: The overall brightness is satisfying; the black levels are inky; the colors are bold; and the contrast is pretty high. In short, it’s quite a pleasure to behold. It’s usable outdoors, and the almost-nonexistent bezels likewise allow the screen to melt in the hand.

By default, the display sits on the cooler side of the spectrum, which some people may not be comfortable with. Fortunately for those who prefer a warmer display profile, Doogee includes all the controls needed to tweak things to their preference.

We didn’t mind the 720p resolution during our weeks of testing. From a distance, the individual pixels aren’t immediately noticeable. And no one can fault Doogee for cutting corners to save a few bucks. What’s actually more distracting: the black borders that surround the display and eat up real estate. 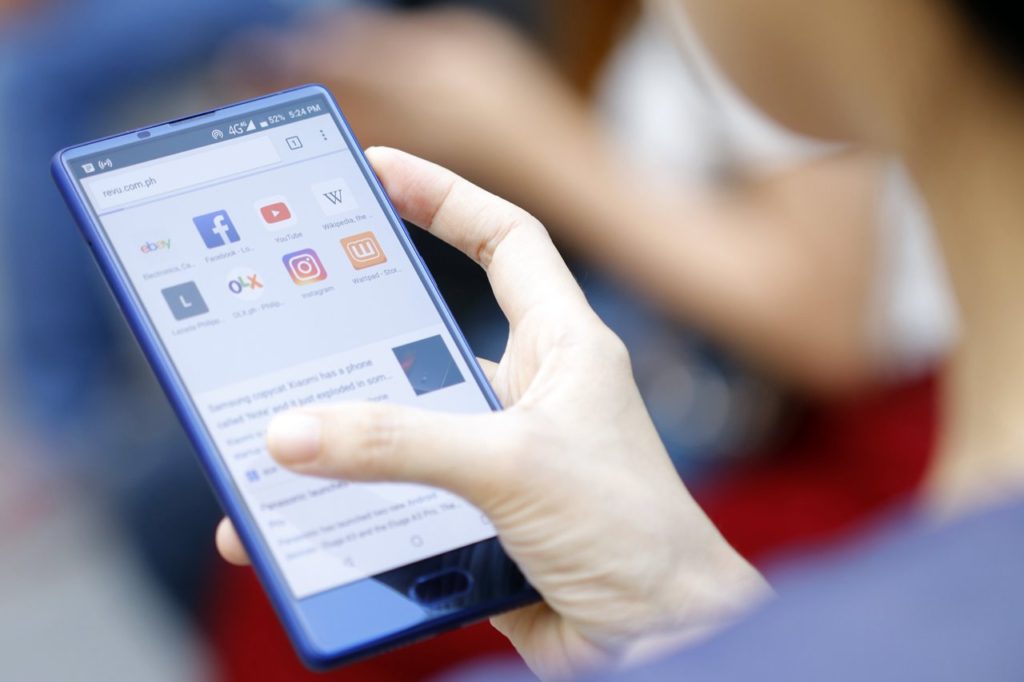 We didn’t mind the 720p resolution during our weeks of testing. From a distance, the individual pixels aren’t immediately noticeable.

Last on our list of stuff we find agreeable about the Mix is charging time. The 3380mAh battery takes around two hours to get from zero to full. Not bad, but not great either. The phone itself will last a full day of moderate use; however, considering the battery capacity and the 720p resolution, we expected more.

There. Those are the positives, most of them centered around the hardware. Now let’s get to the aspects of the phone that need serious addressing.

Throughout our testing, the phone has gone into the so-called Deep Sleep mode on more than a few occasions, causing the fingerprint reader on the front to not pick up our fingerprints.

A press of the power button jolts the device from unwarranted slumber, but reaching for the side button can be somewhat irritating if done several times during the day — especially when a simpler, even if sometimes unreliable, option exists.

The dual cameras round the back make use of 16- and 8-megapixel sensors from Samsung, setting up the expectation that this Doogee can take nice photos even in low light. Well, unfortunately, the Mix doesn’t do well in any lighting condition — even when the sun is out. 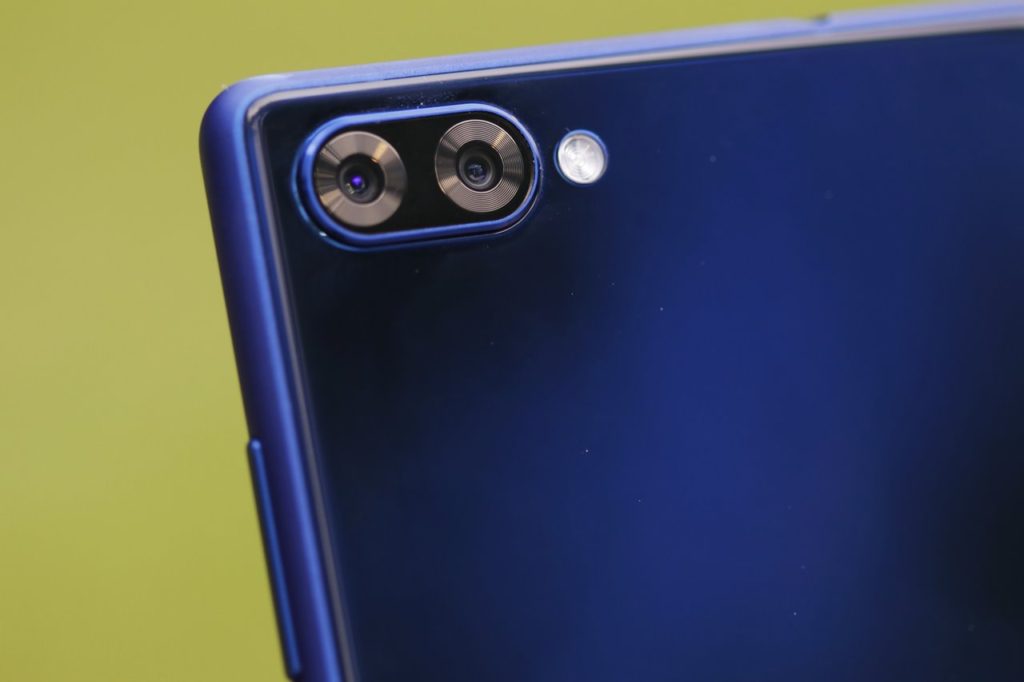 The dual rear cameras make use of 16- and 8-megapixel sensors from Samsung.

So much for those Samsung cameras, at least for the time being (a software update might improve image quality, but that’s assuming Doogee would eventually roll out a patch).

Imaging performance leaves a lot to be desired on the handset. And it doesn’t help that Doogee hasn’t been upfront with the function of the secondary rear camera. Is it a monochrome camera, or is it there strictly for zooming purposes (the viewfinder features a 2x zoom shortcut)? We can only speculate. Our money is on the latter.

In any case, photos look soft and grainy, and colors appear dull, less inviting than in real life. Worse still, the viewfinder can be wonky to operate, as it is all too easy to underexpose or overexpose a shot when the focus shifts from one subject to another. Tapping the screen to focus doesn’t always turn out the way you think it should as well. 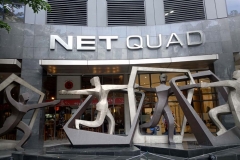 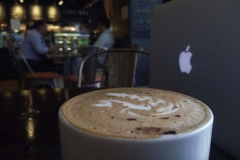 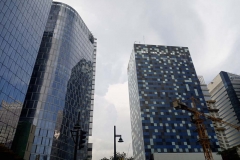 There’s a dedicated Blur mode and manual settings that allow you to adjust the ISO, but not much else. Neither are satisfactory to use.

We don’t have a lot to complain about the front-facing camera — it does a serviceable, if unspectacular, job shooting selfies — though we do find that the placement of the camera can get in the way of its intended purpose. 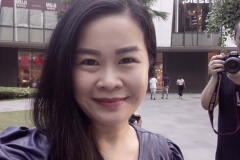 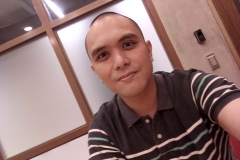 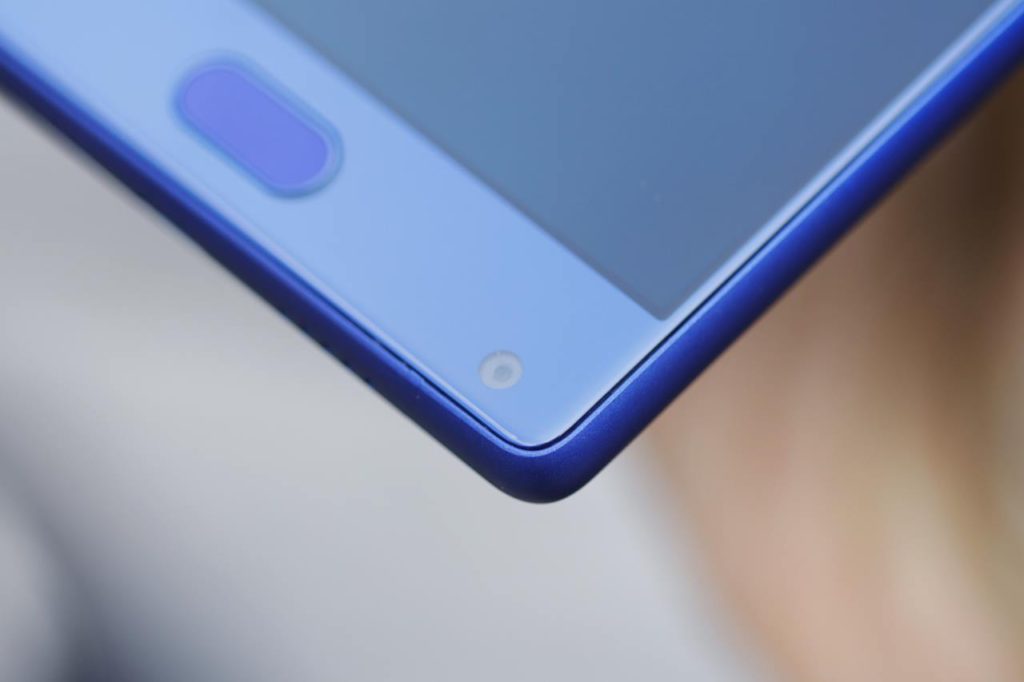 The bottom-right placement of the front camera can get in the way of its intended purpose.

It’s just too easy to inadvertently block the lens — whether it’s our palm, our finger, or the back of our hand — when holding the Doogee Mix with one hand. 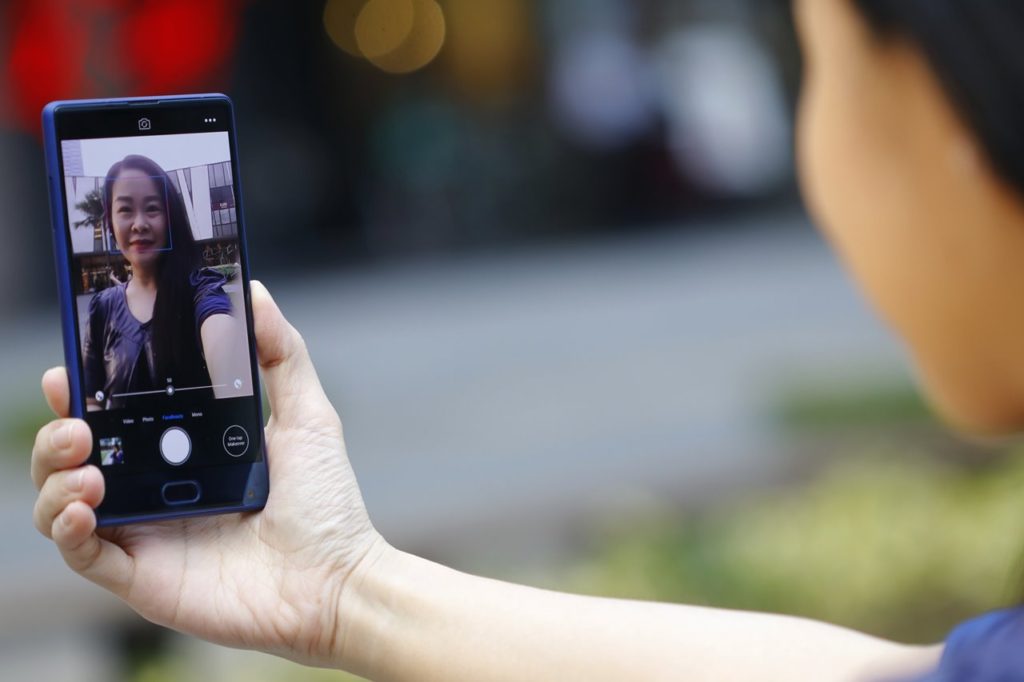 It’s too easy to inadvertently block the lens when holding the Doogee Mix with one hand because of the placement of the front camera.

We suppose we can shoot in a vertical, upside-down orientation, but that introduces another problem entirely: reaching the shutter button single-handed calls for some finger gymnastics. Luckily, we found you can snap a photo using either of the volume keys. 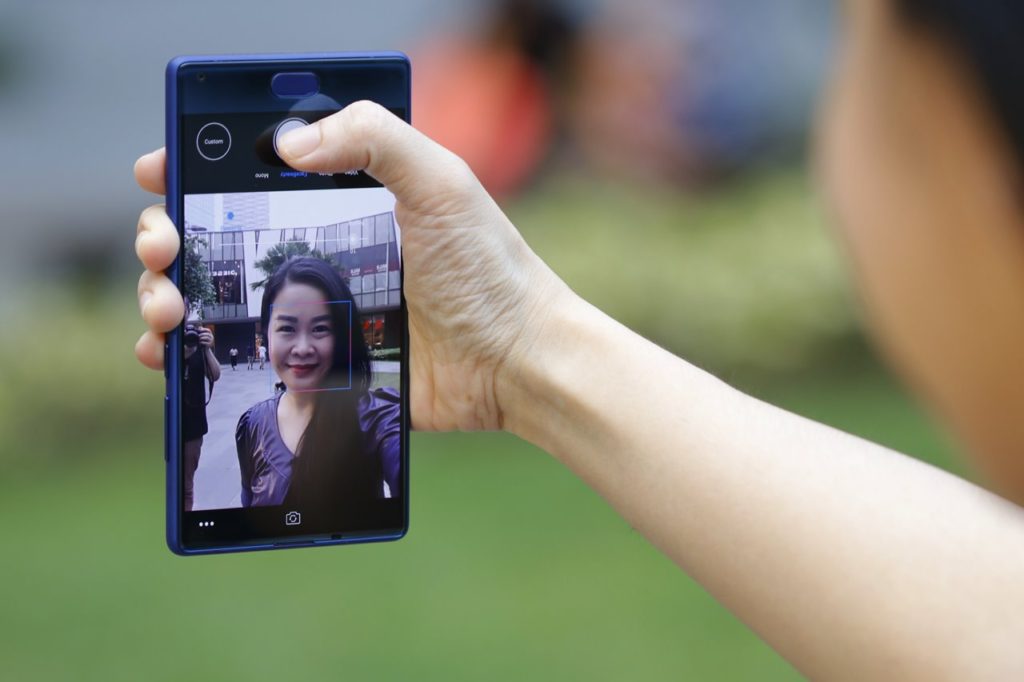 We can shoot in a vertical, upside-down orientation, but that introduces another problem: reaching the shutter button single-handed calls for some finger gymnastics.

The Mix has been put together to impress, with Doogee saying the handset is equipped with the latest octa-core MediaTek Helio P25 processor with 4GB or 6GB of RAM. Our unit offers 6GB and pairs the generous serving of memory with 64GB of upgradable storage.

There’s some confusion over which processor is powering the Mix, though, and some have speculated that it packs an older Helio P20 chip. Doogee has yet to step forward to provide clarification, making things more complicated than they need to be.

Based on our observations, the P25 doesn’t really offer that much in the way of performance gains over the P20. Purely from a technical perspective, the two are very similar chipsets with the same CPU cores and GPUs. 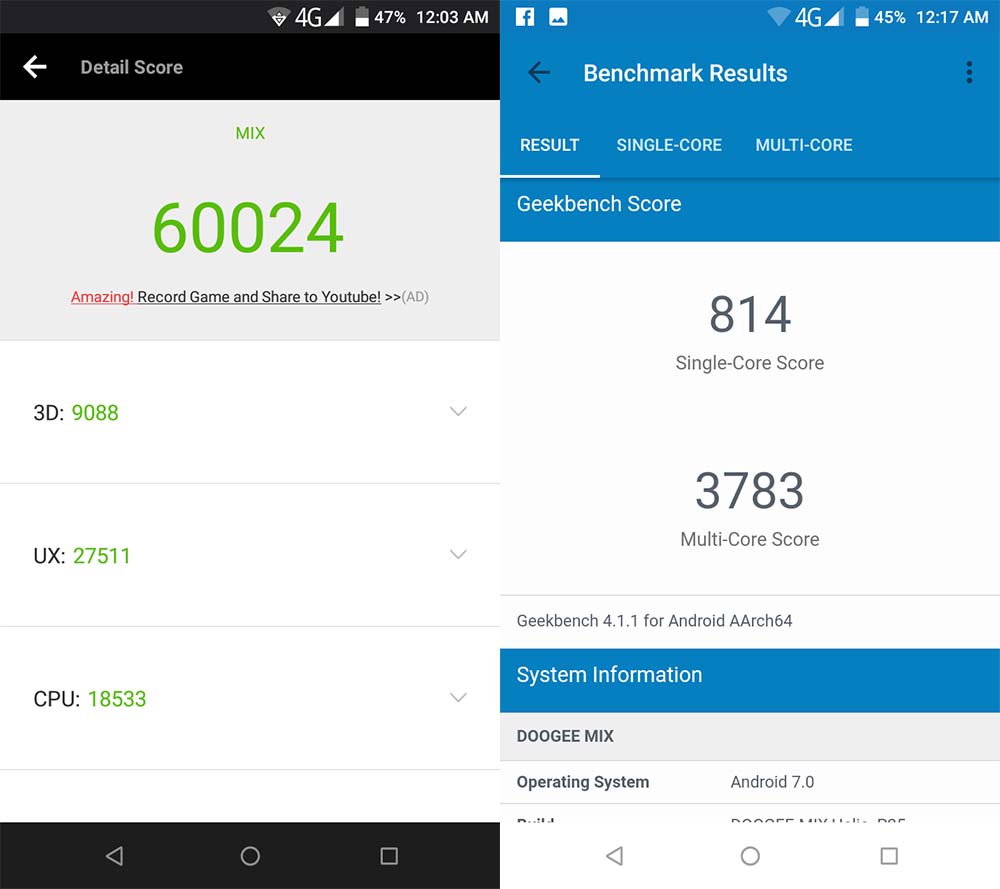 Our unit performs reasonably well and remains cool under heavy load. But it’s not as slick or responsive as the Meizu Pro 7, which pairs a P25 chip with 4GB of RAM, or even Sony’s P20-based Xperia XA1. Ouch. And to think that we’re using the high-end version with 6GB of RAM.

With proper software optimization, the Doogee Mix would easily come out on top. Mobile games don’t seem to mind the woeful OS so much. We were able to play NBA 2K17 and Lineage 2 for Android at decent frame rates and detail settings.

Doogee’s cartoon-ish Android Nougat overlay, on the other hand, doesn’t match the design of the Mix, nor is it doing the usage experience any favors with its over-the-top animations and widgets.

In other words, it’s an ill-fitting suit, and you’d do yourself a favor by installing a notable, third-party option like Nova Launcher and downloading an icon pack from the Play Store. 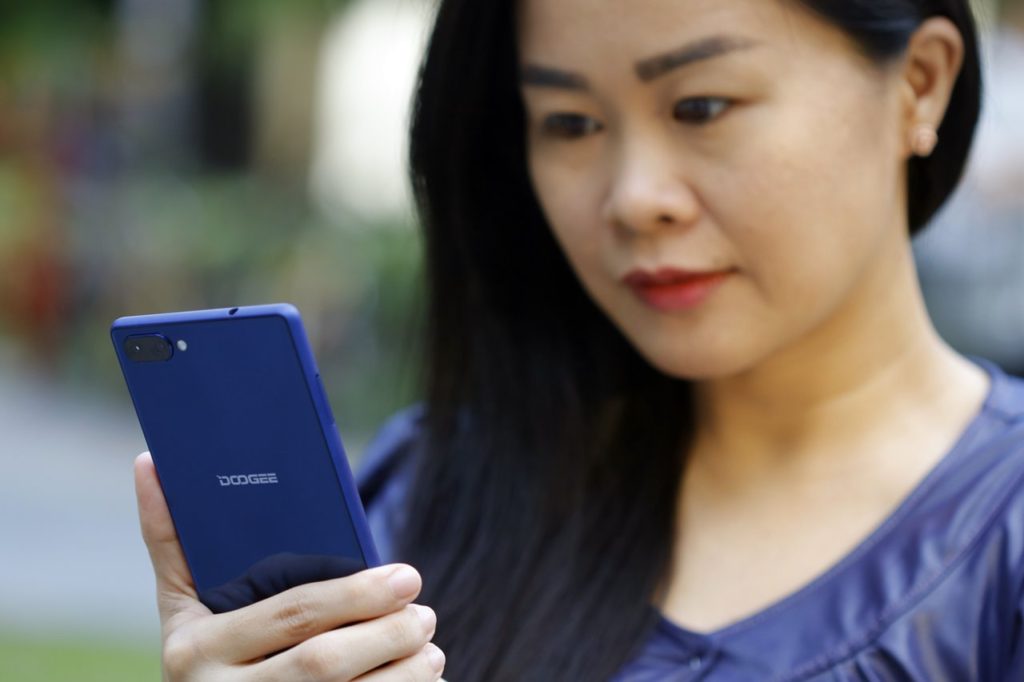 The Doogee Mix should be held up as a cautionary tale of bad software ruining a potentially killer product.

The Doogee Mix should be held up as a cautionary tale of bad software ruining a potentially killer product. The silver lining is that it can be fixed and that the company got the hardware right.

Still, we don’t suggest getting the Mix now. In fact, just stay away from it. Either wait for an update that will iron out the kinks or take your money somewhere else. You may be surprised at how many excellent options are out there for about the same price.