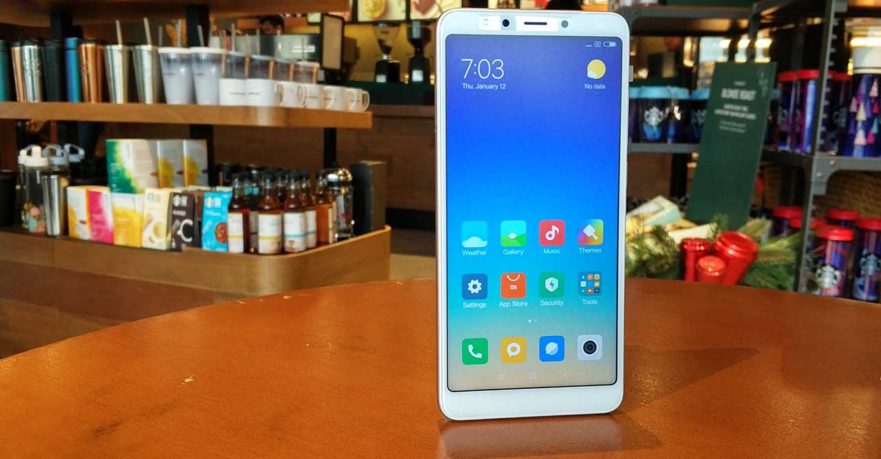 Xiaomi has finally released the Redmi 5 phones on the market. The basic Redmi 5 has a 5.7-inch screen, while the Redmi 5 Plus sports a 5.99-inch display. It has been quite a year for the Chinese tech company, and we’ve waited 3 months for these devices to hit the streets.

(The author, whose passion is to review whatever Xiaomi releases, is a contributor at Revü. Want to contribute articles? Email us at editorial[at]revu[dot]com[dot]ph.)

Xiaomi has revamped the design of the Redmi 5 on the front, though the phone inherits the backside of the Redmi Note 4X. The hardware is identical to the Redmi 5 Plus, featuring an almost borderless front. It is about time that the Redmi series gets in on the craze over bezel-less designs, giving consumers a phone of this kind at a low price. 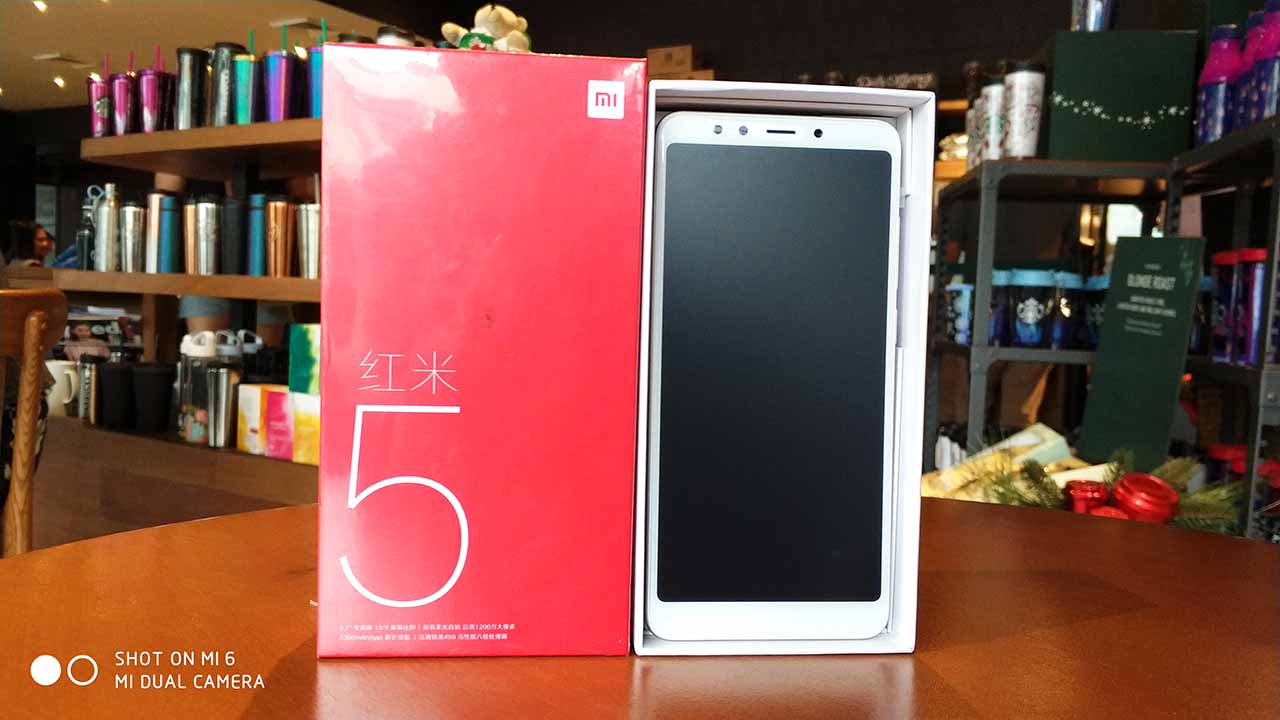 The Redmi 5’s hardware is identical to the Xiaomi Redmi 5 Plus, featuring an almost borderless front.

Typical of other Redmi devices, the overall design is simple yet elegant. We’re quite impressed with the side bezels, as they are pretty slim, while the top and bottom bezels are way smaller compared to those of the Xiaomi Redmi Note 4X. But although there’s room for capacitive buttons on the lower portion of the Redmi 5, Xiaomi opted for software or onscreen navigation buttons instead.

The top edge of the Redmi 5 bears quite a resemblance to the Redmi Note 5A’s, but it looks sturdier. There’s an IR blaster, a mic, and a headphone jack up top. 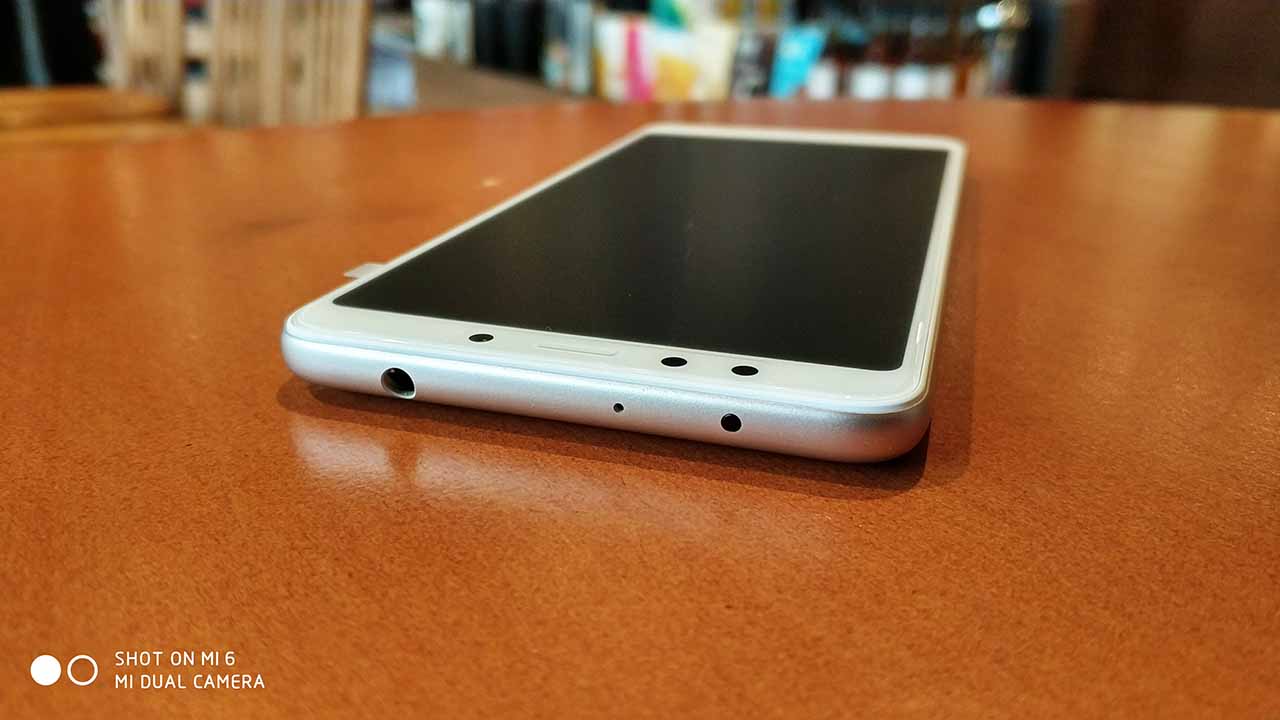 The top of the Xiaomi Redmi 5

The curved edge of the display glass looks appealing and blends seamlessly into the body of the device. The metal back battery cover uses a brushed-aluminum finish, similar to the one used in the Redmi Note 4X. It is easy to grip and does not feel slippery. 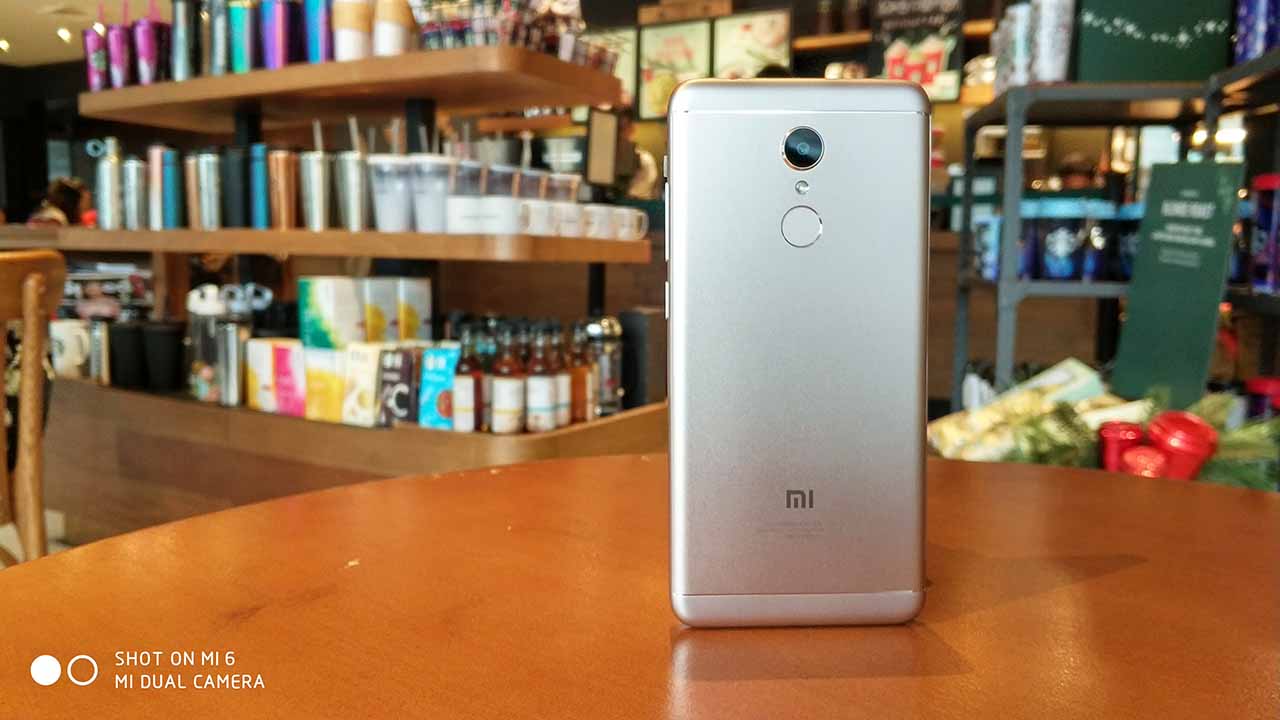 The Redmi 5’s metal back battery cover uses a brushed-aluminum finish, similar to the one used in the Xiaomi Redmi Note 4X.

On the right-hand side, there’s a volume rocker and a power button. On the left lies the SIM-card tray, which accepts two nano-SIM cards or a single nano-SIM card and a microSD card of up to 64GB. 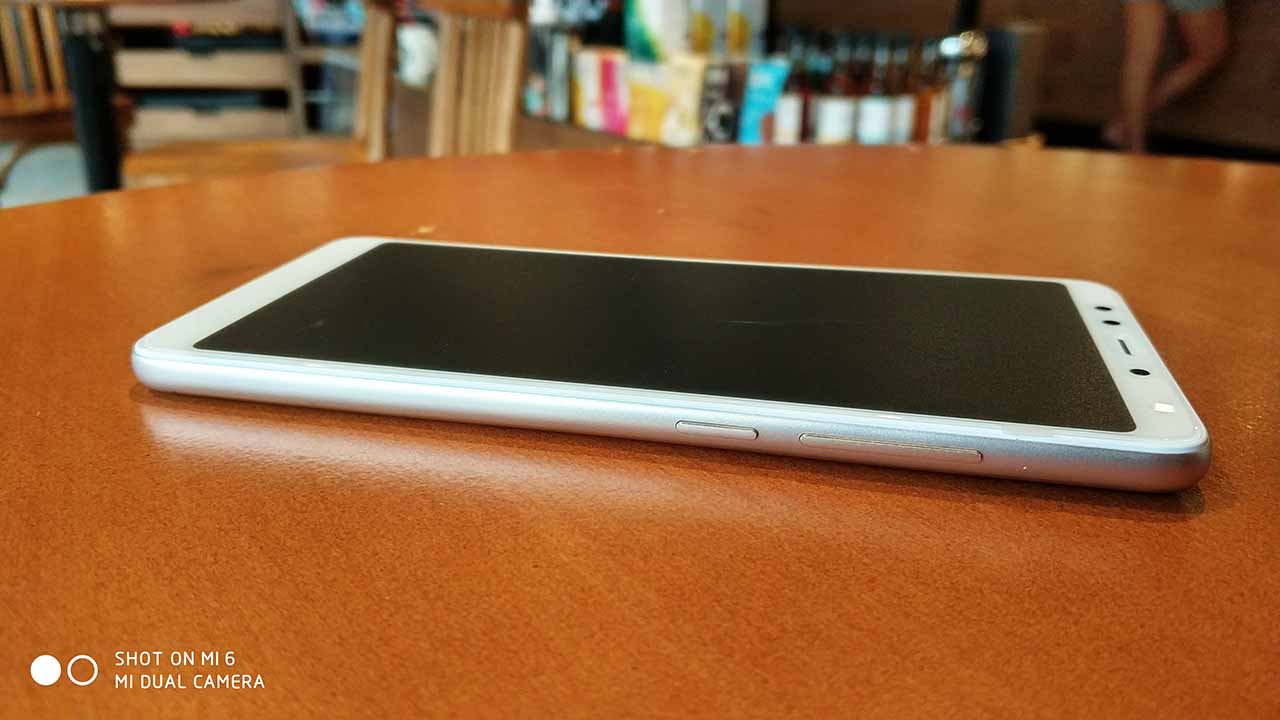 A volume rocker and a power button on the right side 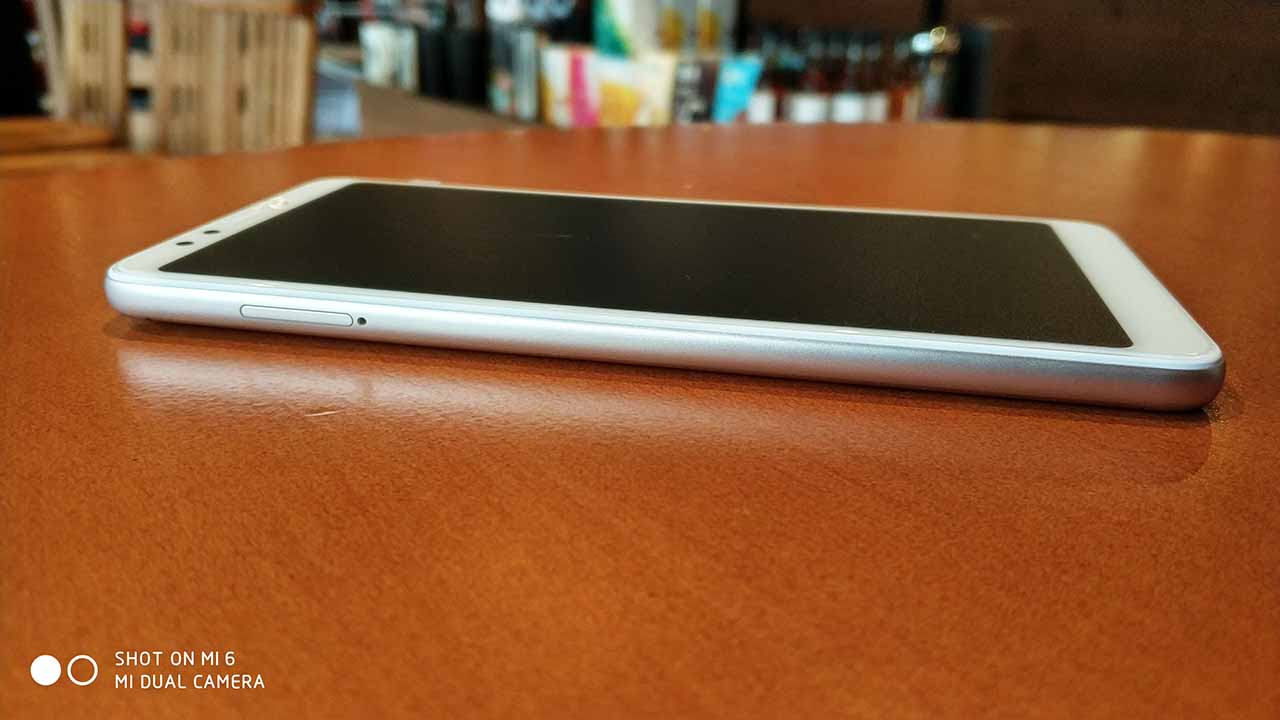 On the left lies the SIM-card tray.

At the bottom, you’ll find a microUSB charging port and a single loudspeaker. There’s only one cutout for the loudspeaker; the other cutout is for the mic. 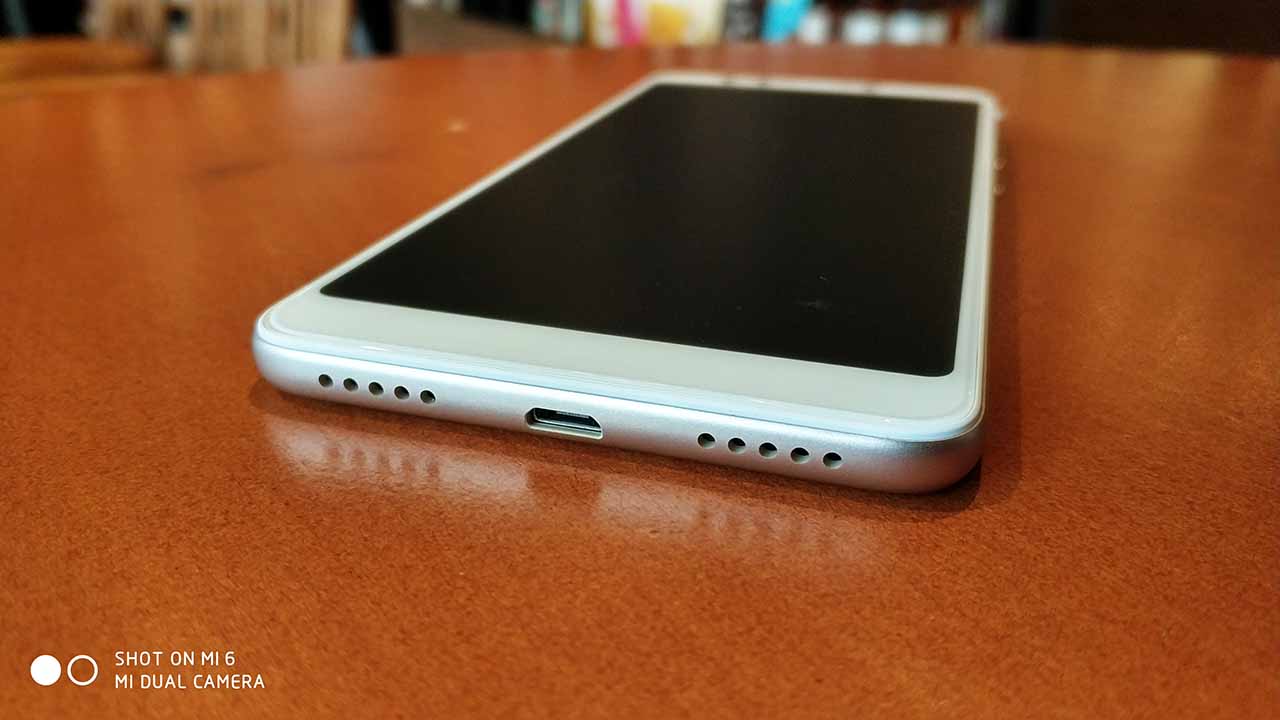 Up front, we have a 5.7-inch, 720 x 1440 LCD display and a 5-megapixel selfie camera together with front-facing flash, as well as a white notification LED. High-definition movies look okay on the 18:9 HD screen, and we didn’t notice any significant difference in picture quality compared to 18:9 phones with a 1080p resolution.

At the back, the Redmi 5 sports Xiaomi’s Mi logo, a fingerprint reader, and a 12-megapixel camera with dual-tone LED flash. The camera protrudes slightly from the body, so don’t expect the phone to lie flat on the table or any even surface. Placing the phone on its back risks scratching the lens cover. 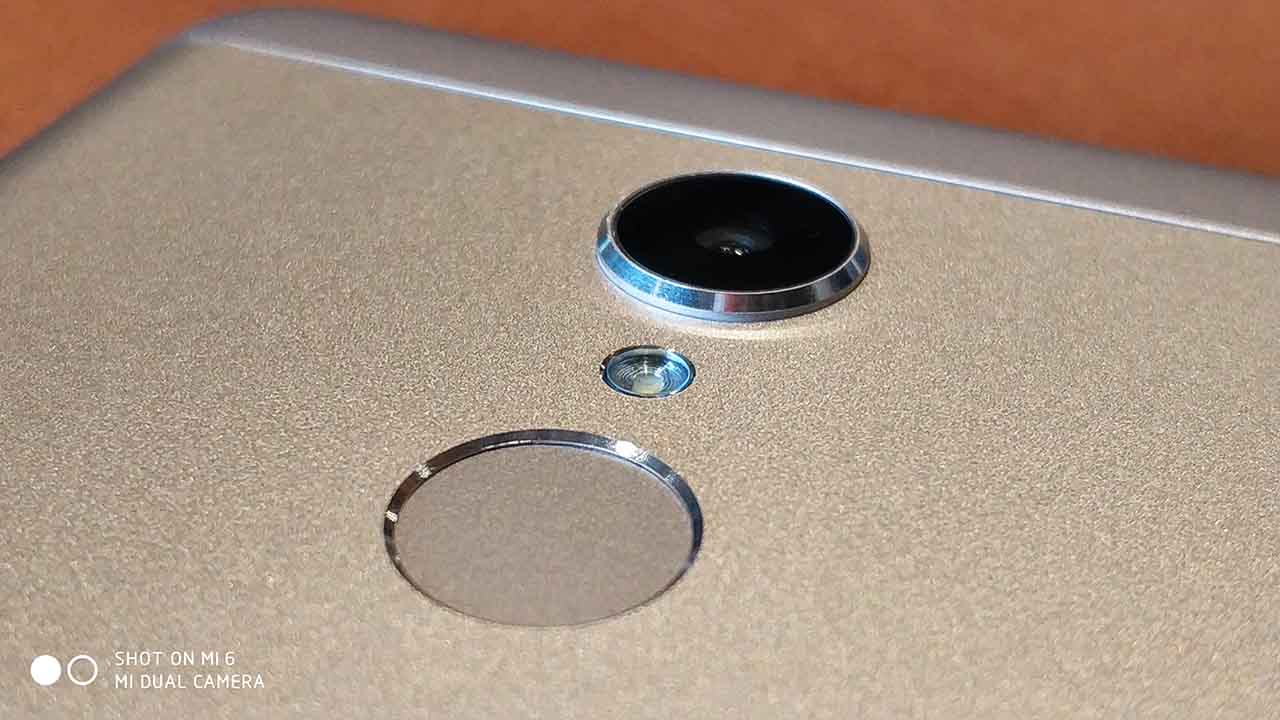 The Redmi 5’s camera protrudes slightly from the body.

A common highlight of smartphones released today is their main camera system. Many smartphone users love to take photos, particularly selfies, and this hasn’t escaped the attention of Xiaomi. The Redmi 5’s image quality is decent, but of course, you shouldn’t expect too much from a unit this cheap.

The main camera takes pretty good shots during the day and is an improvement from the Redmi Note 4X in terms of low-light performance. Unsurprisingly, it delivers its best work outdoors, where there is plenty of light. Manual controls are in place, but the options are limited to white-balance and ISO controls. The focus and exposure dials are nowhere to be found in the software. 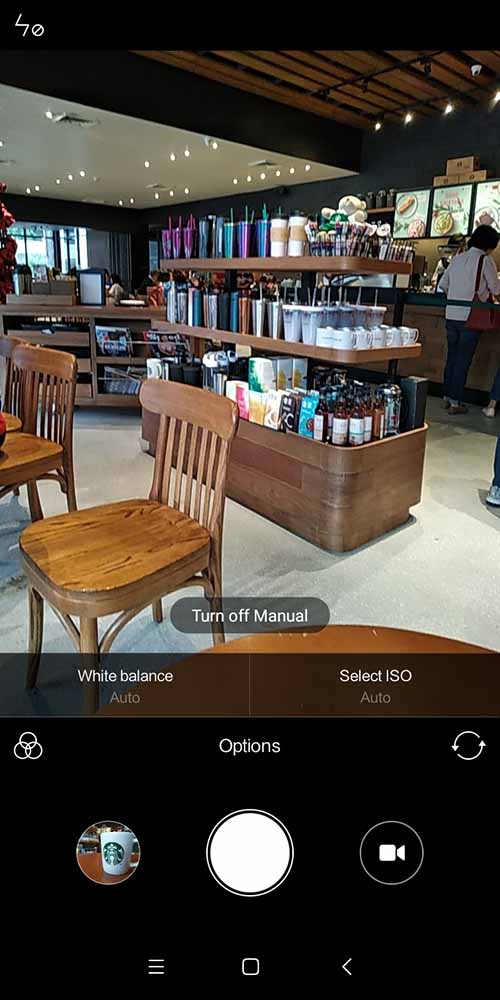 The Xiaomi Redmi 5’s manual controls are in place, but the options are limited to white-balance and ISO controls.

Also, to those wondering, the camera sensors are confirmed to be built by Omnivision. 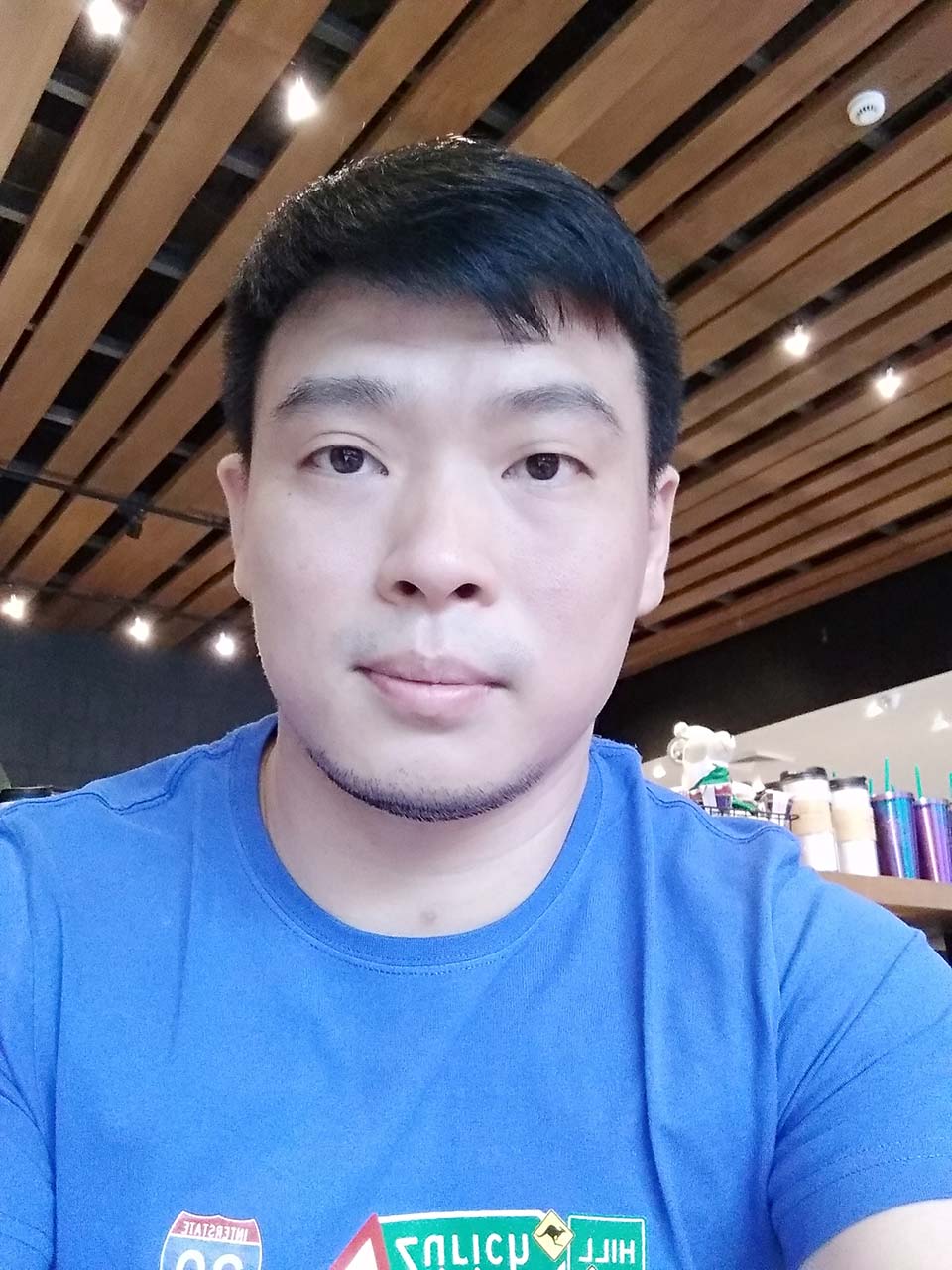 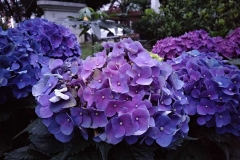 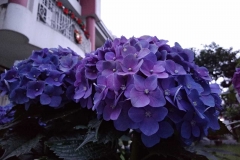 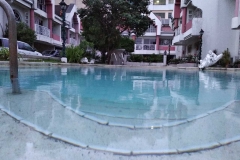 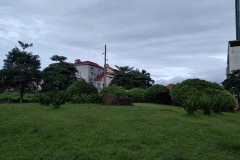 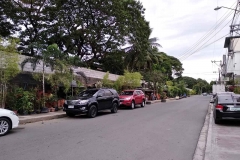 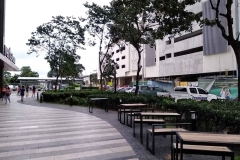 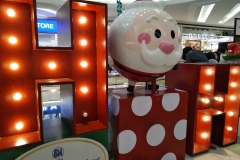 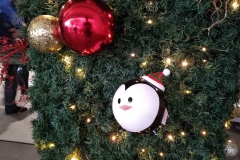 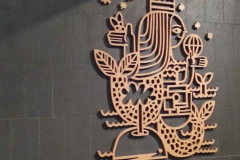 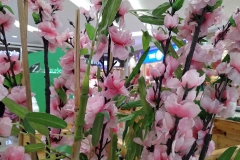 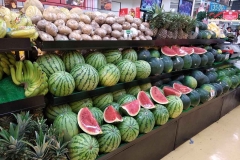 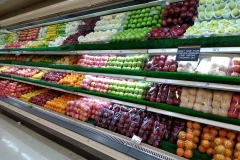 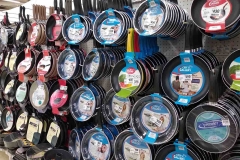 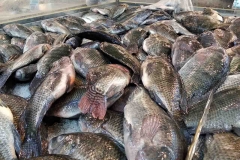 Prior to this review, we were able to fully test out the Redmi 5, undertaking some heavy tasks and running games and mobile-benchmark applications.

We thought our unit did a serviceable job gaming and running multiple apps at the same time. We tried NBA 2K18 for Android; the game did not run very smoothly — there were portions of the game that felt slow and unresponsive.

That’s not to say the Snapdragon 450 processor inside the Xiaomi Redmi 5 is underwhelming; the Vivo V7 and V7+ are built around the same chipset, but it plays NBA 2K18 at medium graphics settings without breaking a sweat.

The occasional iffy frame rates likely has more to do with the fact that our Redmi 5 only has 2GB of RAM. The 3GB version should fare better. No surprises here: The 2GB Redmi 5 isn’t suited for demanding 3D games.

Basic functions, such as web browsing, email, and social media, work well enough, though. But we highly recommend getting the variant with more memory if you have the cash to spare.

The Antutu benchmark app gave the Xiaomi Redmi 5 with 2GB of RAM a score of 55,353 points. This is quite a leap from the Snapdragon 435-based Redmi 4X that notched a score of 42,415 points, per our testing. 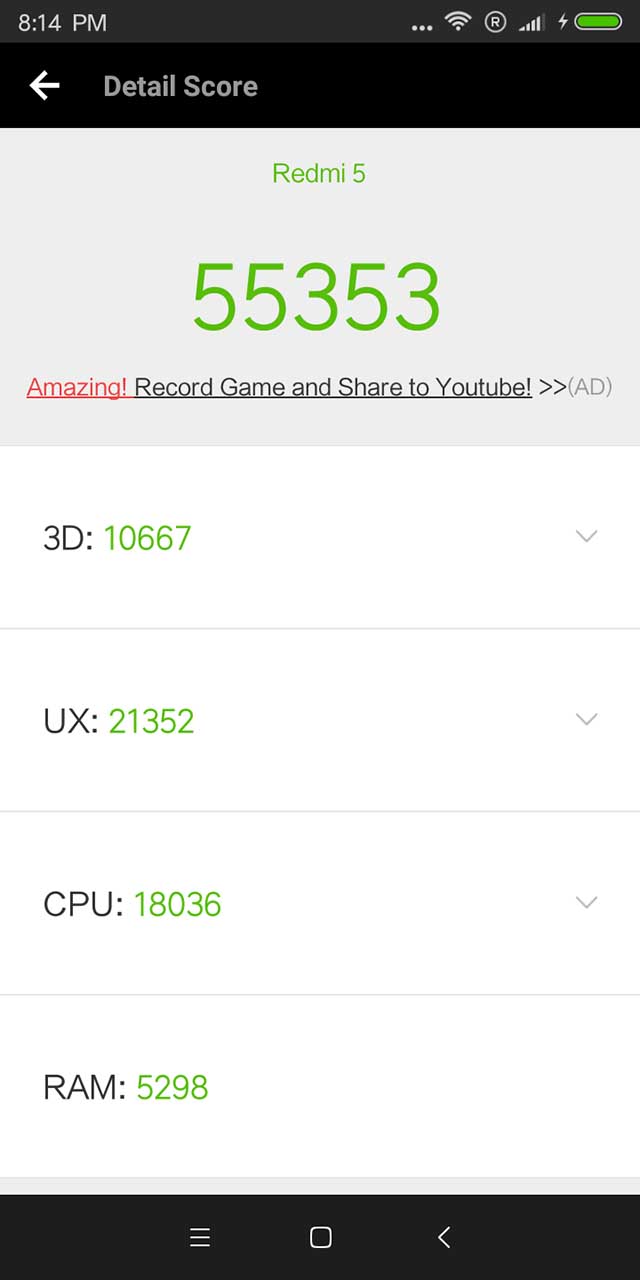 We were able to get some great battery life out of this Redmi’s 3,300mAh battery. With moderate to heavy usage, the phone got us through a full day without scrambling for a charging port or a portable battery charger. In our PCMark test, our unit impressed with a rating of 18 hours and 22 minutes.

The Xiaomi Redmi 5 supports 10 different LTE bands. It’s easy to switch to an LTE network inside the settings, but once you do, the second SIM will be limited to 2G and 3G networks. You can freely choose which SIM you want to use LTE data since this is a dual-LTE, dual-standby smartphone.

We didn’t experience any problem browsing the web using 3G or LTE in our home country, the Philippines, and dual-standby mode works flawlessly. Likewise, Wi-Fi and Bluetooth connectivity function as intended. Wireless screen mirroring is available via the Miracast protocol. The phone also offers Bluetooth 4.2 and GPS with GLONASS support for accurate positioning.

The Redmi 5 is one of the first devices to ship with the MIUI 9 Android skin out of the box. We figured back then that the Xiaomi Mi Mix 2 or Mi Note 3 would get that distinction — but instead it was awarded to the Xiaomi Redmi 5 and Redmi 5 Plus. Running MIUI 9.1, the phone feels pretty slick and responsive. 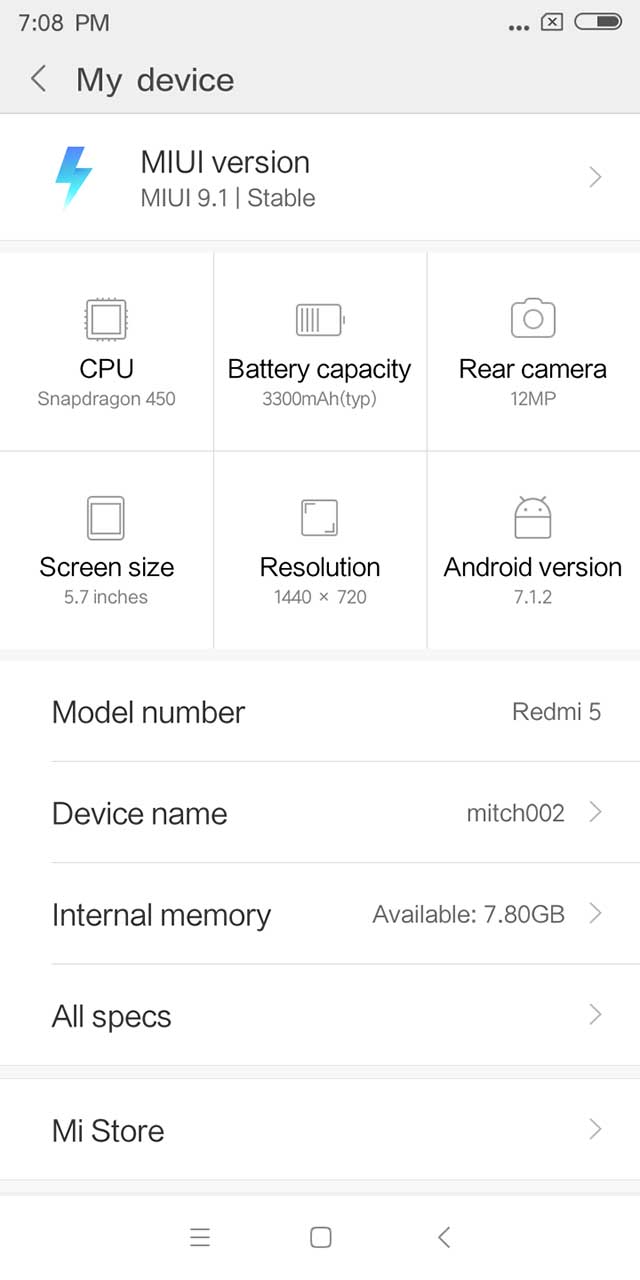 The phone feels pretty slick and responsive with Android Nougat (MIUI 9.1) as its OS.

Ultimately, the decision whether to get the Xiaomi Redmi 5 or not might come down to this question: Is it a worthy upgrade from the Xiaomi Redmi Note 4X? Well, we can tell you this much: It’s a good phone, for sure, but the Redmi 5 lacks the processing power to justify another purchase, especially since the Snapdragon 625 in the Note 4X is already plenty powerful for its price.

Ultimately, the decision whether to get the Xiaomi Redmi 5 or not might come down to this question: Is it a worthy upgrade from the Redmi Note 4X?

Redmi 4X users and those upgrading from an entry-level phone, however, are in for a nice finish to the year.