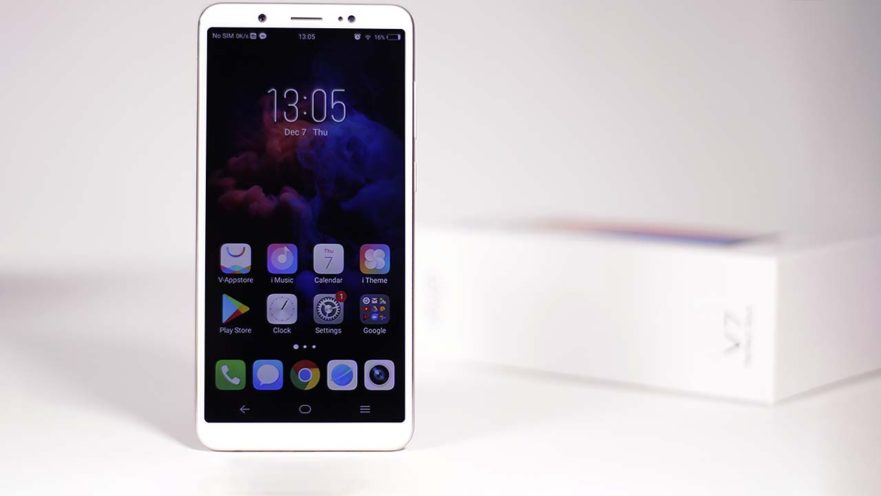 The Vivo V7+ is one of the first smartphones in the midrange category to launch with an extra-wide display in the Philippines. In our review, we found the device to be a decent all-around effort, though its screen lacks punch and sharpness, and the processor it is fitted with — while nippy enough to satisfy casual users — surely can be faster.

Vivo V7 unboxing video we posted on our Facebook page

The Vivo V7 doesn’t address any of these concerns, and ships with the same Qualcomm Snapdragon 450 chip that pushes the same amount of pixels, albeit spread across a more manageable display size of 5.7 inches. Very little, if anything, has changed on the outside, with the exception of that reduced screen real estate.

The good news is that it comes with a lower price tag — P14,990 (around $297) at launch, though it has dropped to P12,990 ($258) lately — yet packs all the core specs that make the Plus variant desirable in the first place, including a 24-megapixel selfie camera that ranks among the best in the business regardless of category. 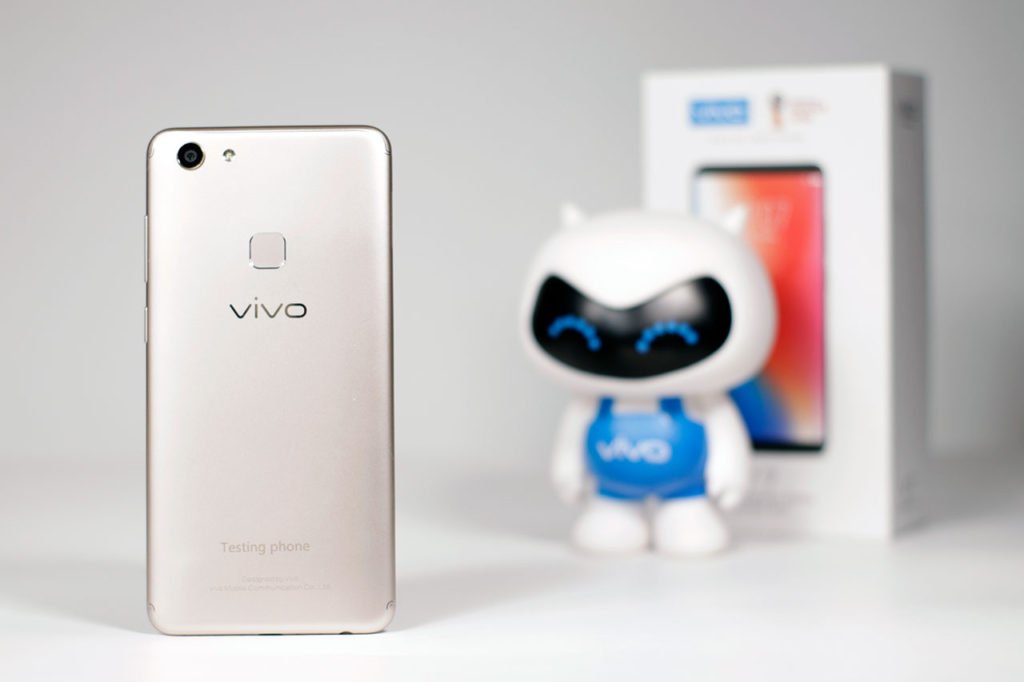 And thanks to the much-needed price cut, the Vivo V7 has broken off from the popular trio of Chinese handsets with 18:9 displays which includes the Huawei Nova 2i and OPPO F5, both of which remain pegged between P15,000 ($297) and P16,000 ($317) locally. It wasn’t obvious before, but right now, at a reduced cost, the V7 is especially tough to ignore.

A quick glance at the V7 gives the impression that Vivo has done very little, if anything at all, to distinguish this phone from its Plus counterpart. It’s expectedly smaller — that’s it. 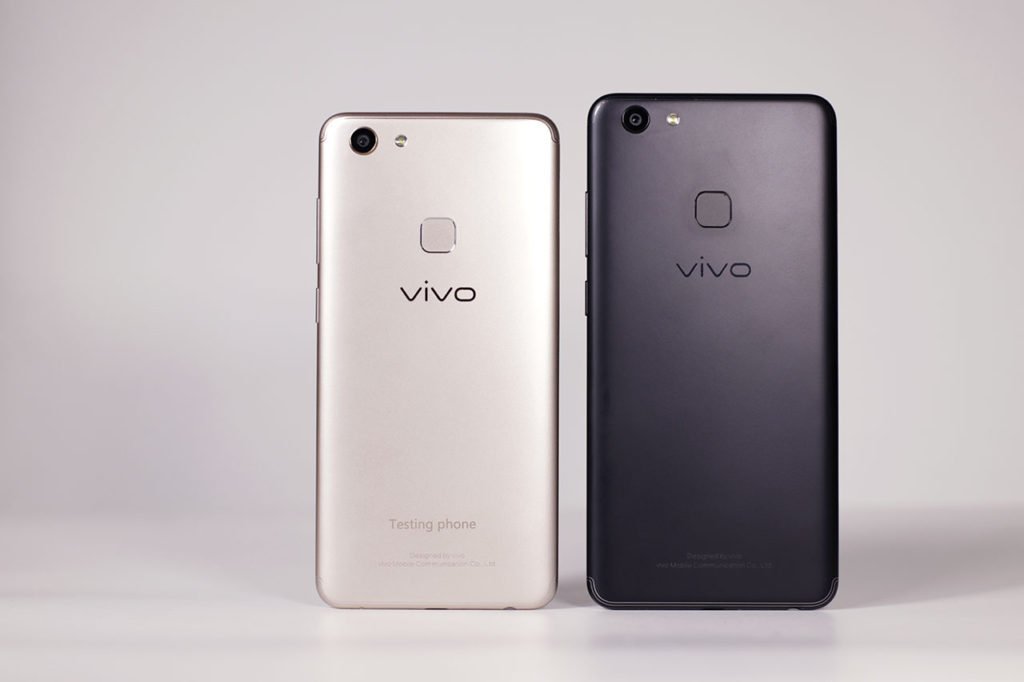 A quick glance at the V7 gives the impression that Vivo has done very little, if anything at all, to distinguish this phone from its Plus counterpart, the V7+.

The overall size difference isn’t significant, in case you’re wondering, and both phones are usable with one hand. We still prefer the size of the V7 as a daily driver, though. It’s lighter, more pocketable (albeit a smidgen thicker), and you pretty much get the same device.

The unibody back is tapered for an ergonomic fit and made of metal or plastic that is made to mimic the look and feel of metal, with crisp lines that run across the top and bottom edges and curve down toward the sides. It’s a clean, if unoriginal, look that will appeal to many.

READ ALSO: Best smartphones of 2017: From high-end to low-end

Our unit has a matte-gold finish, giving it an upscale vibe. The Vivo branding on the backplate is plain as always, but in a nice touch, glimmers in the light. The fingerprint reader is likewise located opposite the front, and sits flush with the body. It’s fast and accurate. Plus, it’s in a spot where your index finger normally rests when using the handset one-handed.

The left cheek of the Vivo V7 conceals a dedicated SIM and SD card tray that requires an eject tool (one’s included in the box, as usual) to access. You can fit one microSD and two SIM cards simultaneously, allowing you to use different carriers at the same time for better coverage and data rates. 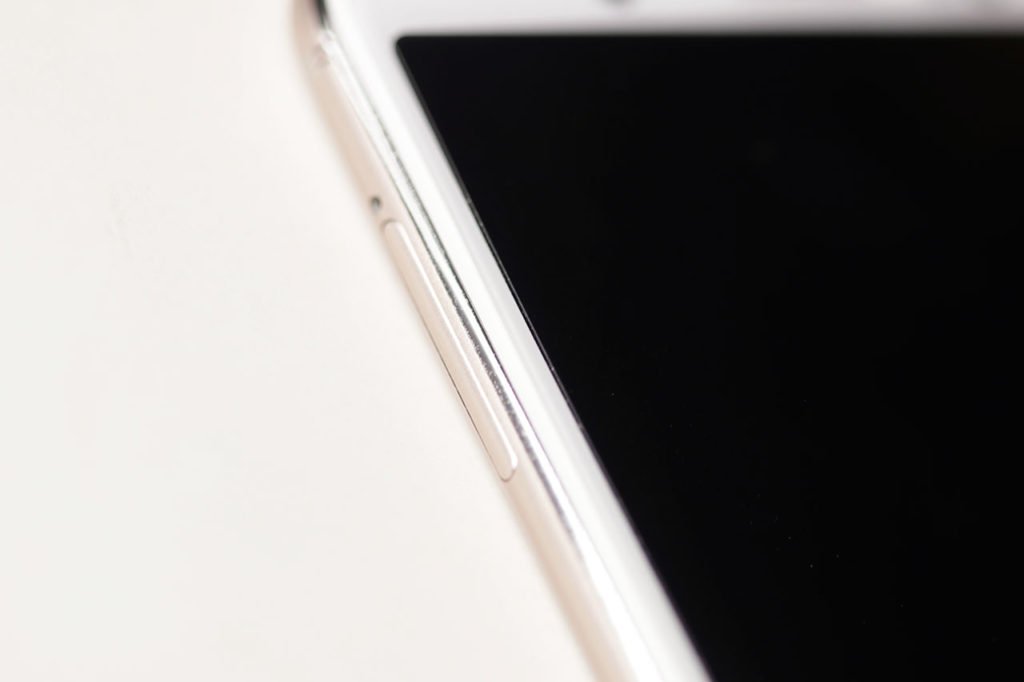 The left cheek of the Vivo V7 conceals a dedicated SIM and SD card tray that requires an eject tool to access.

Along the bottom, you’ll find a standard microUSB connector flanked by a headphone jack and a speaker grill from which sound spills from. And while the V7 won’t draw much attention from audiophiles, it is a decent, though not great, option for media playback. 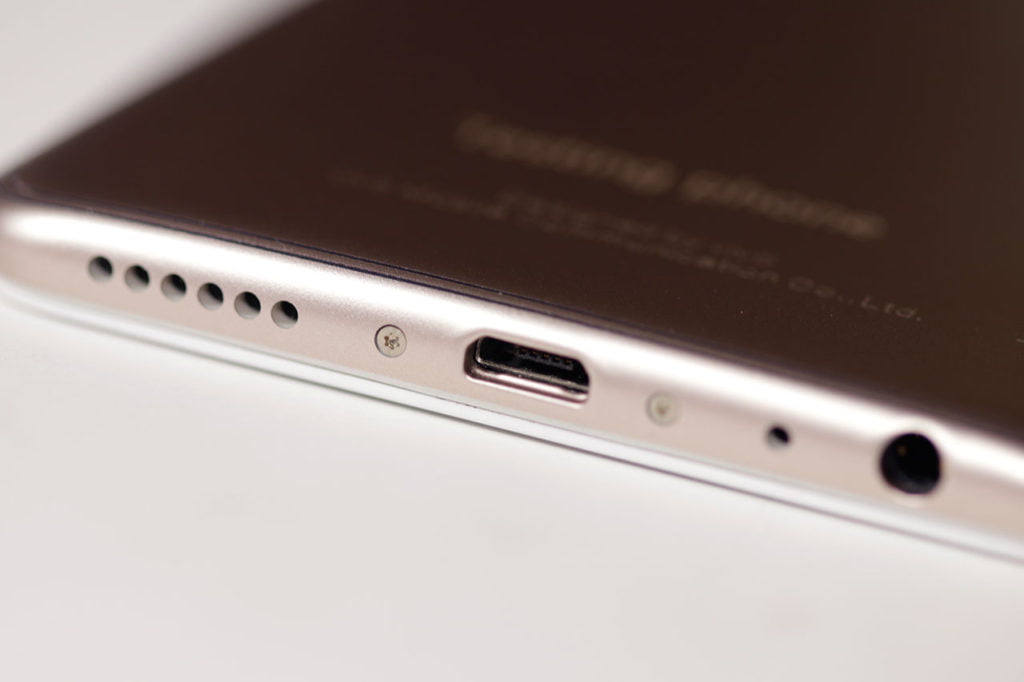 Along the bottom of the Vivo V7, you’ll find a standard microUSB connector flanked by a headphone jack and a speaker grill.

Moving to the front of the device, the 18:9 LCD display is wide and big enough for enjoying content, gaming, and typing comfortably. Additionally, the bezels aren’t too big and distracting, and it helps that onscreen buttons are used to navigate Vivo’s Android Nougat-based OS, as opposed to capacitive or tactile keys. The virtual buttons take up space on the screen, though. There’s no getting around that.

The display itself looks pleasant and crisp enough for our liking. It didn’t bother us at all that the V7 has a 720p panel. It probably would had the screen been bigger. The viewing angles are good, too. And if you’re worried that the wider picture format won’t support your favorite apps, don’t be; Vivo offers the option to manually scale apps to fill the entire screen. 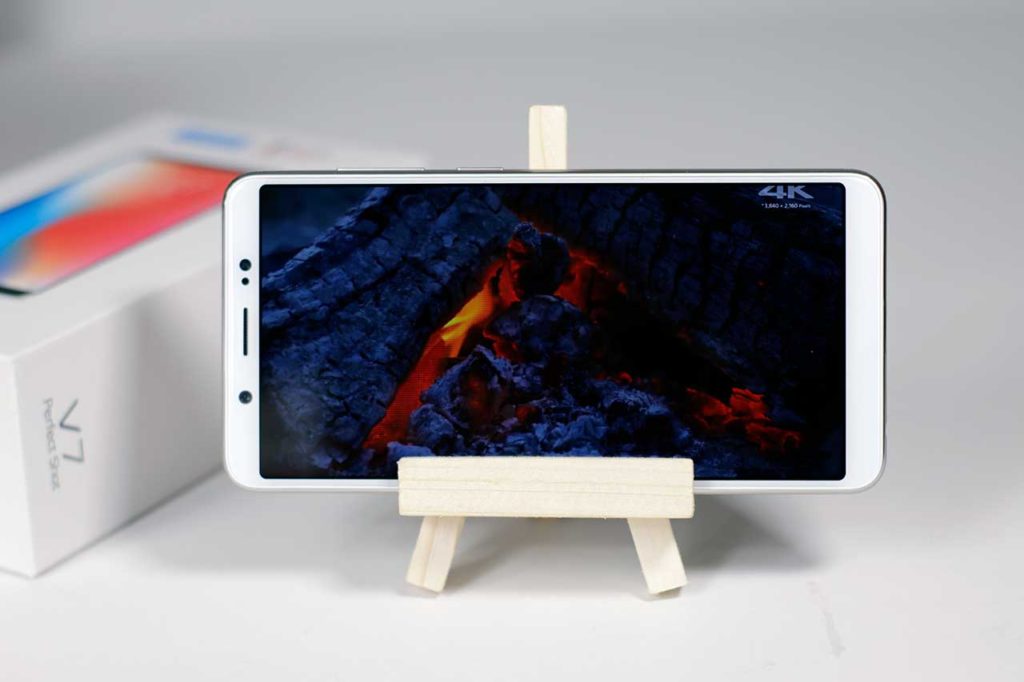 It didn’t bother us at all that the Vivo V7 has a 720p panel. It probably would had the screen been bigger.

Another highlight is the V7’s 24-megapixel front camera, which delivers extra-sharp selfies and videos at resolutions of up to 1080p. It isn’t capable of shooting 4K footage, but who cares? You probably don’t need four times the amount of pixels of standard HD from a secondary camera anyway.

For stills, it is about as sharp as it gets for smartphones now, and some users may find it overkill. Image quality is great overall. Pictures tend to be bright even in poorly lit indoor environments. Colors, while not eye-popping, are close to accurate. The auto-focus feature works relatively quickly, especially when in range.

As with other Vivo models in the midrange, this a product whose focus is producing decent selfies under most lighting conditions — and it delivers. 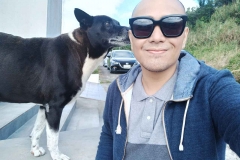 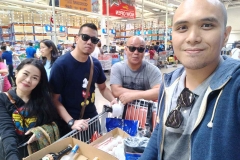 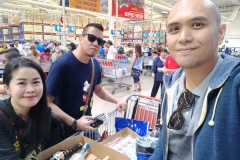 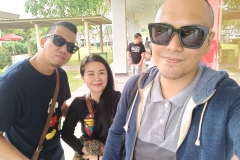 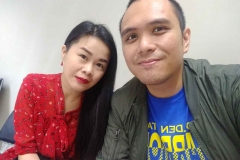 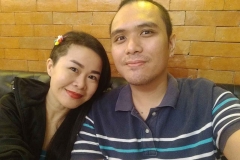 It’s also thanks to the front camera’s ability to shoot quality images and video that the V7 can make use of Vivo’s Face ID Access feature, which allows users to unlock the device using their face.

It doesn’t come close to the convenience of the Apple iPhone X’s face-recognition technology, but it does a respectable job of letting you dive into the home screen without pressing a button or placing a finger on the fingerprint reader. We didn’t experience any major performance issues so far, except in areas where light is problematic. 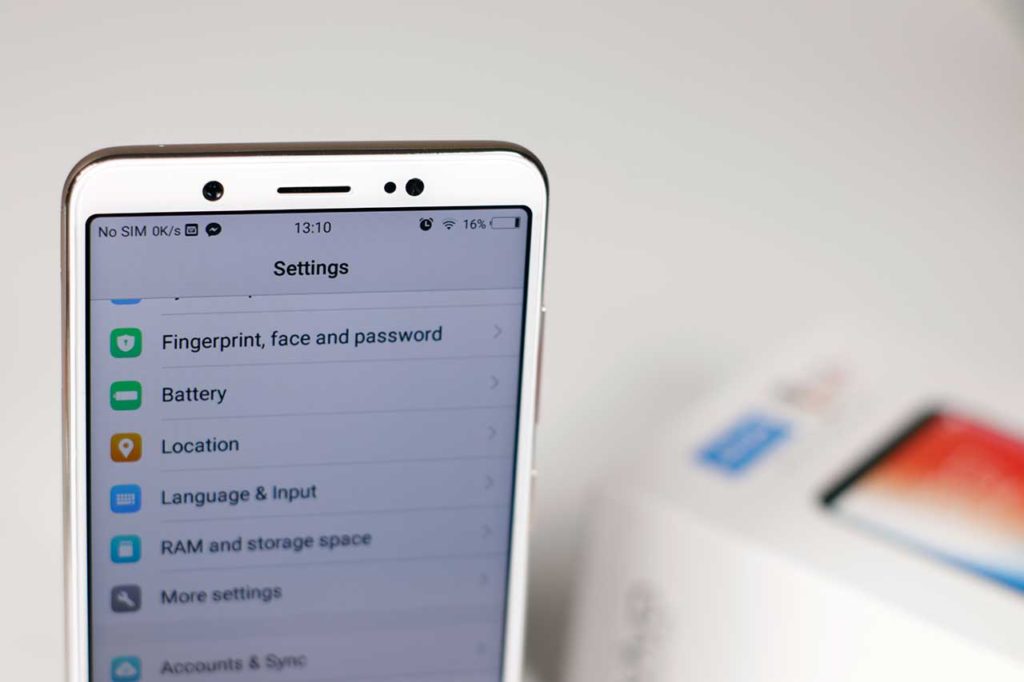 It’s also thanks to the front camera’s ability to shoot quality images and video that the V7 can make use of Vivo’s Face ID Access feature, which allows users to unlock the device using their face.

The main camera is equipped with a 16-megapixel sensor and a decent f/2.0 aperture, but unfortunately, these do not translate well to the real world. Results are not as sharp as we’d like and colors appear a little faded. It doesn’t come close to competing with the overall performance of the camera above the display. But for casual use, it holds its own. 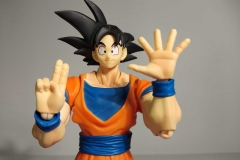 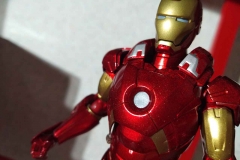 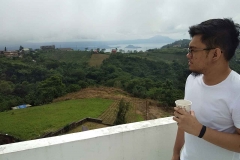 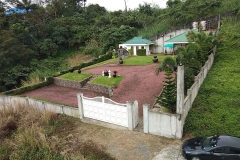 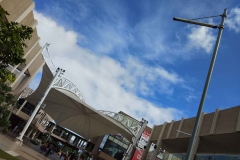 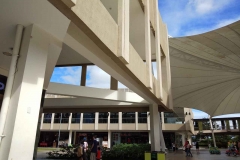 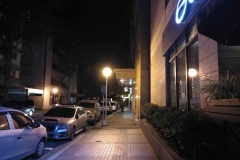 Getting portraits with a blurred background is possible with the rear camera, though without an onscreen guide, it can be tricky to know exactly when and where to hit the shutter button.

We actually got better results with the front camera. Not to mention, we found that Portrait Mode is easier to use when taking selfies, possibly because the software is more effective at detecting objects within a limited range.

Keeping things moving under the hood is a Qualcomm Snapdragon 450 processor, the same brains behind the Vivo V7+. It’s an octa-core unit backed by 4GB of RAM and can go up to 1.8GHz, making it powerful enough for the average person and better suited for multitasking than chipsets in competing devices that fall in the “just above P10,000” price point.

Further, the Vivo V7 can play the most punishing games on the Play Store, including Titan Quest and NBA 2K18, smoothly with relatively good detail at Medium settings. Most of the applications we’ve tried so far have run without a hitch, though you might encounter some performance issues when cycling through multiple apps.

Performance comparison: NBA 2K18 running on different Android and iOS devices. You can see how the Vivo V7 performs at the 2:23 mark. Related article: NBA 2K18 for Android and iOS: Can your phone run it?

Finally, there’s battery life, always a critical metric for mobile devices. Don’t expect two full days of use from the 3,000mAh cell, but it will get you past the first day on a single charge. Not too shabby given the specs and resolution of that extra-wide display. The handset doesn’t have fast charging onboard, but the included charger will top up the phone from zero in around two hours, so the wait shouldn’t be too long.

The Vivo V7 punches above the weight of most phones with similar display formats and focus on selfies. And thanks to a recent price drop, it is now a much more reasonable purchase than at launch.

Really, the only knock against the hardware is its not-so-good rear camera; everything else about it is above average or better. For anyone whose budget extends no further than the V7, this is as good a choice as any on the local market.