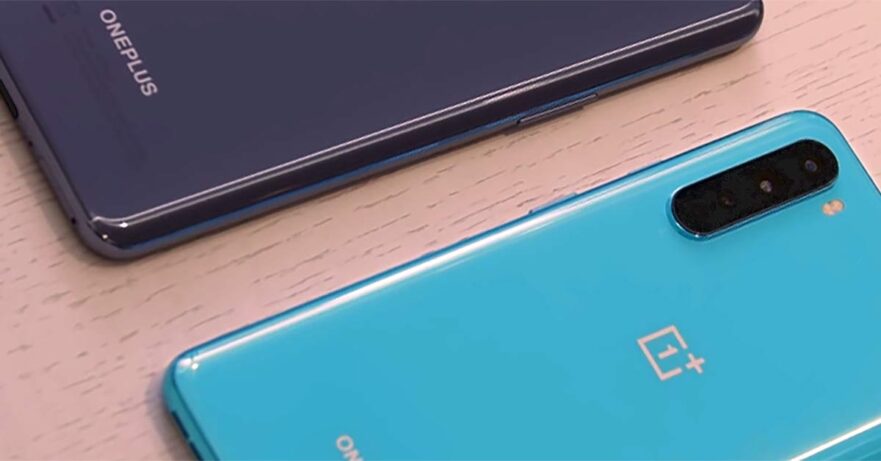 We’re only six days away from the July 21 launch of OnePlus‘ first midrange smartphone from its new affordable series. But as early as now, we can already see it in its full glory.

The OnePlus Nord‘s full design has been revealed in the video we embedded below — content creator Marques Brownlee’s interview with the brand’s co-founder, Carl Pei.

Video in which the OnePlus Nord in gray and teal color variants (along with the OnePlus Buds true wireless earbuds) are shown. Here, they also tackle this topic: How much do smartphones actually cost?

One look at the OnePlus Nord, and you can already tell it’s from the company, as it does seem like it comes from the OnePlus 8 lineup. That’s actually the intention, Pei explained. He showed several designs they had considered. However, in the end, they opted for something familiar, so the smartphone will appeal to a much broader market.

The OnePlus Nord has four sensors placed in a vertical array at the top-left part of the curved back panel. In the middle is the logo, and at the bottom is the OnePlus branding. Two front cameras are housed in a punch hole on the upper-left side of the screen.

On the bottom edge are the speakers and the USB Type-C port, and on the right, the alert slider atop the power button.

Don’t look for an NFC chip here, as that alone could already cost OnePlus $4 (around P198 in Philippine pesos) per unit.

There’s no 3.5mm headphone jack, too, so there will be more space for other components like the battery. Pei additionally said TWS earphones are already getting cheaper and are now more accepted by consumers, hinting that the OnePlus Buds are going to be launched on the 21st as well.

OnePlus co-founder Carl Pei said TWS earphones are already getting cheaper and are now more accepted by consumers, hinting that the OnePlus Buds are going to be launched on the 21st as well

There’s no IP certification either; getting that would make the OnePlus Nord around $15 (roughly P742 in Philippine pesos) more expensive. Pei revealed that the No. 1 cost driver is the machine for testing the device to get officially certified and the second is manpower — people who are going to make sure that the phone is indeed protected from the elements.

This doesn’t mean that the Nord is not water- or dust-resistant, as it has seals to provide some form of protection.

The handset does offer OnePlus’ own Warp fast-charging technology, which costs higher than traditional tech. It also boasts an AMOLED display with a 90Hz refresh rate. Take note that AMOLED is up to 2x more expensive than an LCD.

We already know that the OnePlus Nord is powered by a Qualcomm Snapdragon 765 5G processor. And that it will be priced under $500 (under P24,720). What else should we look forward to on July 21? Stay tuned.