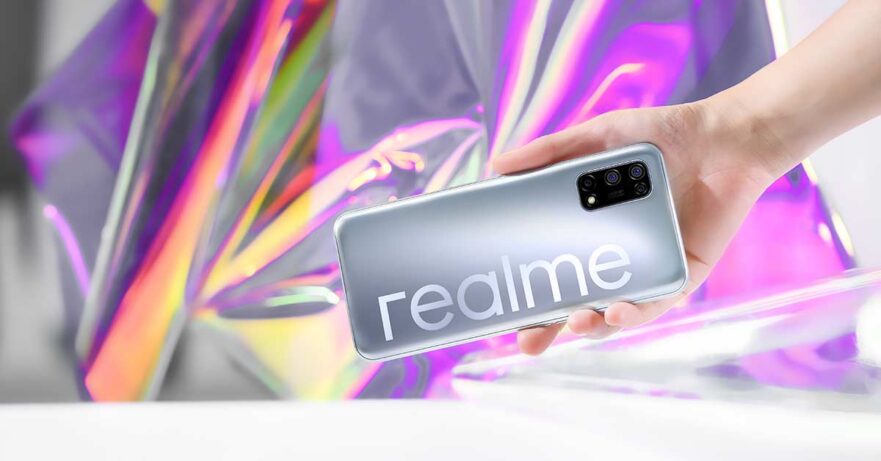 We’re just days away from the Realme V5 launch happening in China August 3. If you’re not familiar, the V5 is an upcoming affordable 5G phone with a MediaTek chipset inside.

And thanks to a recent listing on a Chinese online store, we now know a lot more about the device ahead of its unveiling, including which chip it carries, its camera specs, and what configurations it will launch with as well as the smartphone’s color options.

The Realme V5, which has been confirmed to use the model number RMX2111, is expected to arrive sporting a new MediaTek Dimensity 720 5G spec under the hood, with 6GB RAM or 8GB RAM and 128GB of internal storage. This would make the V5 only the second handset with a Dimensity 720 5G; the OPPO A72 5G is the first device to use the chipset. As usual, the V5 will ship with Realme UI based on Android 10.

The Realme V5 is expected to arrive with a MediaTek Dimensity 720 5G, which would make it only the second smartphone with that chip after the OPPO A72 5G

The color options are Silver-Winged Boy (not the best Chinese name for English-speaking markets, obviously), Breaking Light, and Blue.

Additionally, the 5G phone will get a 6.5-inch LCD screen with a punch hole for the 16-megapixel camera. Elsewhere, the 48-megapixel main camera is paired with an 8-megapixel ultra-wide one as well as a pair of 2-megapixel sensors. The handset also has a 5,000mAh battery that supports 30-watt fast charging like the Realme X3 SuperZoom, which recently debuted in the Philippines.

Interestingly, a higher-end Realme V5 variant bound for China is rumored to pack a smaller 4,500mAh battery but much faster 65-watt charging. The said unit might be the Realme V5 Pro, which reportedly exists.

In related news, the V5 has been shown off in pictures in campuses around China, to reinforce the idea that the smartphone is designed specifically for younger users. Realme is said to be aiming at Generation Z with the V5’s release. Could this be the first Realme 5G phone that Philippine telco Smart Communications says it will offer to its subscribers soon?