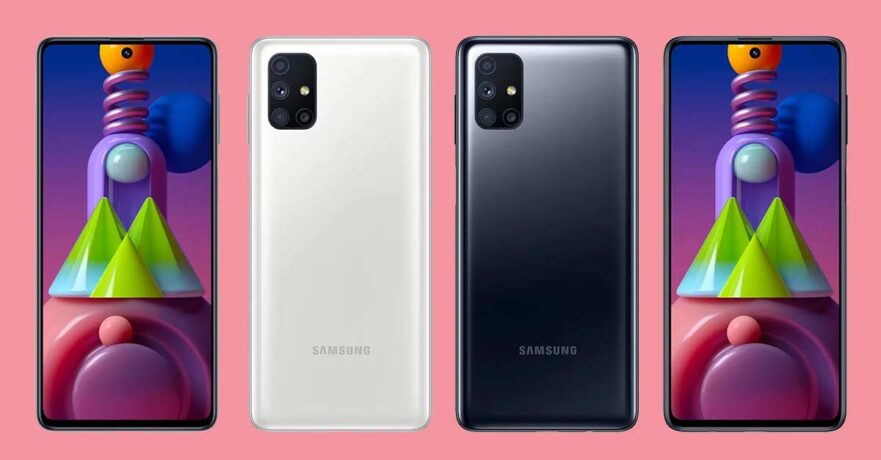 The Samsung Galaxy M51 has hogged more headlines recently because it’s expected to carry a 7,000mAh battery with support for 25 watts of fast charging and a full charging time of roughly two hours.

(Update, August 31: And it’s official! Click here for the price and specs.)

Its support pages are already up in Russia, Kazakhstan, and India. Today, we at Revü have spotted a similar page for the Philippine market, suggesting that the smartphone will also be launched here.

What has been leaked so far

Almost everything about the Samsung Galaxy M51 has leaked out. One of the most recent shows the handset’s supposed official press renders.

The images that have surfaced reveal the Galaxy M51 in white and black color variants sporting an Infinity-O display, an L-shaped quad-camera system on the back, and a side-mounted fingerprint sensor. Yes, it looks like the Samsung Galaxy A71, alright, save for a few changes, the most obvious of which is the lack of geometric pattern on the rear panel.

This Samsung Android 10 unit is expected to feature a Super AMOLED screen measuring 6.67 inches and packing a resolution of 2,340 x 1,080. Inside the punch hole at the center of the front panel is a 32-megapixel, f/2.2 selfie shooter.

Despite its huge battery, the Samsung Galaxy M51 is supposedly not heavy, weighing only 213 grams. Plus it’s just 8.5mm thick.

At the heart of the phone, processing all the tasks, is a Qualcomm Snapdragon 730G, a chip that also powers devices such as the OPPO Reno 2, which was launched in the Philippines in October 2019 with a price tag of P28,990 (around $412).

At this point, it looks like we’re only waiting for the debut of this Galaxy. Which country will get it first? When will it become available in the Philippines? How much will it cost? And will it be another online-exclusive smartphone? Stay tuned.