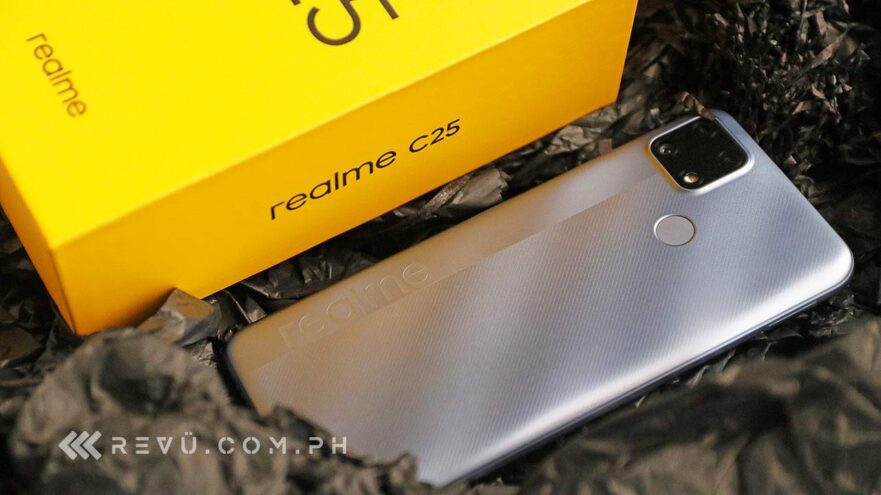 Still looking for a do-it-all smartphone that won’t put a huge dent on your budget? #ChallengeAccepted, says Realme Philippines. As expected, the company today announced the Realme C25 alongside the Realme Buds Air 2 and Realme Buds Air 2 TWS earphones, adding yet another compelling, value-focused handset to its local lineup.

(Update, April 17: Realme C25: To buy or not to buy? Check out our review of this budget phone now!)

The Realme C25, along with the Realme C21, is the first phone to receive the high-reliability certification by TÜV Rheinland, having gone through many test scenarios, including seven extreme-environment test. We first heard about this emphasis on product quality at Realme’s Quality Standards Launch Event earlier this month.

Another major selling point is the phone’s 6,000mAh battery, which supports USB-C fast charging up to 18 watts. It is quoted to last up to 47 days on standby mode, 60 hours when streaming music, and 25 hours during video playback. The battery can be charged back up to 29% in 30 minutes, which should be enough for multiple hours of heavy use.

Additionally, the Realme C25 is equipped with a competent MediaTek Helio G70 chip, which debuted on last year’s Realme C3. The processor is paired with 4GB RAM and 128GB storage, making it one of the most affordable devices in the Philippines offering 128GB of base storage.

Last, but not certainly not the least, the C25 boasts triple cameras at the back headlined by a 48-megapixel image sensor and secondary macro and mono sensors. The front-facing camera has a decent 8-megapixel sensor. The camera software includes several shooting modes and filters, which Realme says is designed to give as many users as possible a quality camera system for social media.

Sounds good? Make sure to add the Realme C25 to your online cart during its introductory sale to get a great deal on this device. Stay tuned for our review of the smartphone.