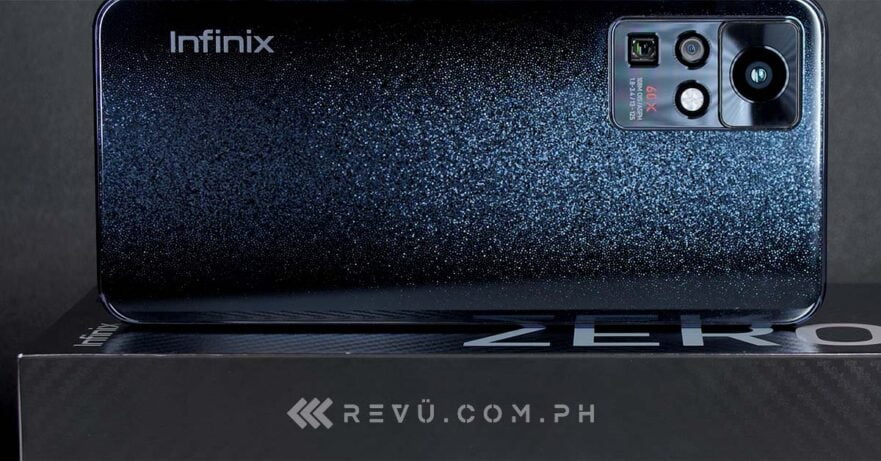 The Infinix Zero X Pro is the company’s latest flagship device, which will launch in the Philippines on October 5.

(Update, October 11: Our Infinix Zero X Pro review is up!)

(Update, October 5: The Infinix Zero X Pro has gone on sale in the Philippines!)

Ahead of the phone’s unveiling next week, Infinix Mobile sent us a Zero X Pro unit for review, and though it’s still too early to give our verdict, we can share with you our brief unboxing video, as well as some early hardware impressions.

But before we get to our initial observations, check out the embedded video below to find out what’s included in the retail box.

The Infinix Zero X Pro ships in a pretty sizable rectangular box that includes the usual accessories, with the rare exception of a wired headset, especially considering the presence of an analog headphone jack down below. It also comes with the company’s 45-watt fast charger, which has been certified by TÜV Rheinland for safety. We wish it came with a clear silicone protector, though, as the all-black case takes away from the aesthetic at the back.

Speaking of which, the Zero X Pro is easily the most attractive device Infinix has produced, sporting what the brand calls a Galaxy Dual Glass Finish on the rear, which is reminiscent of Google’s legendary Nexus 4 from 2012. The attractive 3D finish, coupled with the glossy exterior and the iPhone-like rounded frame, gives the Zero X Pro an unmistakable appearance that will turn heads.

Of course, the other big feature here is the phone’s 108-megapixel main camera and 8-megapixel periscope shooter with up to a 60x zoom range. The latter allows for reasonably clear images from afar through digital zoom and post-capture cropping. We’ll have more about the Zero X Pro’s camera system in our full review.

Powering the phone is the same MediaTek Helio G95 spec we’ve seen on the standard, non-5G versions of the Realme 7 and Realme 8, among others. The Helio G95 is the successor to the G90 series and boasts the same 12-nanometer fabrication process and configuration of A76 and A55 cores as the G90T. It likewise has a quad-core Mali-G76 graphics chip, which handles most modern games at medium to high settings just fine.

Does it heat up quickly like a microwave burrito like some G90 series phones we’ve tested? That’s something we’ll soon find out. However, it is worth noting that the Zero X Pro uses Infinix’s Dar-Link game-optimization engine, which is said to create better visuals and reduce lag during intense game sessions. It’s also designed to maintain the smooth operation of your device, reducing the possibility of overheating in the process.

Other notable specs here include a 6.67-inch Samsung-made AMOLED screen with a 120Hz refresh rate and 240Hz touch sampling; an under-display fingerprint reader; a 16-megapixel selfie cam; and a 5,000mAh battery. As expected, the Infinix Zero X Pro boots XOS 7.6 based on Android 11 out of the box.

Recap: What’s in the box