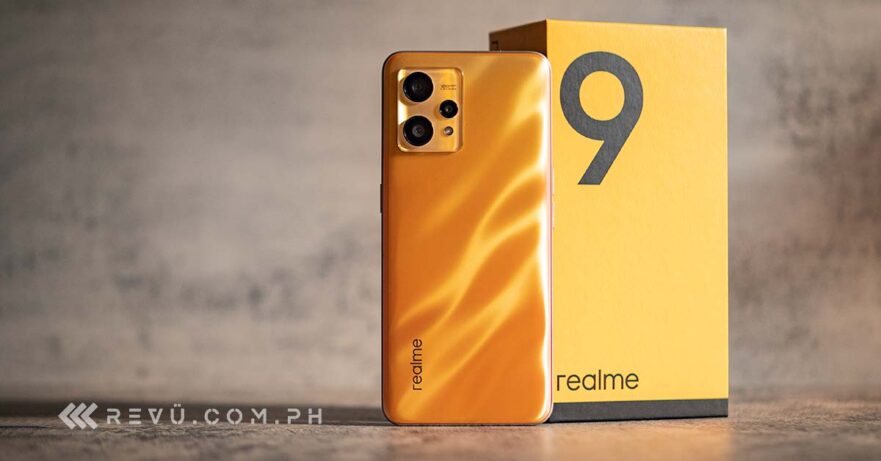 It’s official: The Realme 9 4G, which debuted in India in April, will launch in the Philippines June 14.

(Update, June 14: The realme 9 4G with 108MP main camera is official in the Philippines! Price, discount, and freebie details here. And here is our review of the phone.)

The standard 9 series smartphone boasts some interesting features, including a 6nm Qualcomm Snapdragon 680 chipset with up to 8GB RAM and 128GB of internal storage and an impressive 108-megapixel main camera. Meteor Black, Sunburst Gold, and Stargaze White are your color options for the LTE version.

Unlike the Realme 9 Pro Plus Free Fire Limited Edition, there’s nothing special in terms of box contents this time around. Opening the retail package, you’ll find the following:

The smartphone doesn’t ship with a set of wired earphones for private listening, but then again, that’s nothing new as far as Realme smartphones are concerned. It does come with a headphone jack, though, so you may want to purchase a headset separately if you want to listen to your device’s audio privately.

Another notable hardware detail is the paint job, particularly on the Sunburst Gold variant of the Realme 9 4G. It’s wonderfully gorgeous and truly one of a kind. The ripple holographic texture that resembles the glint of the afternoon sun on the ocean’s surface makes the back of the phone genuinely stand out in a crowded segment, design-wise. Realme says that it was created “through innovative plasma atom-coating and UV-nano imprinting processes” — which is to say that it’s more complicated than usual.

The matte finish on the rear is also a nice touch and prevents the visibility of fingerprints and smudges. It provides a decent grip, too, especially combined with the flat edges all around the chassis. At 7.99mm, the Realme 9 LTE version is reasonably slim, despite carrying a sizable 5,000mAh battery that should last days on a single charge. The battery also supports fast cable charging using the bundled 33-watt Dart Charge power brick and USB-C cable.

Bright and punchy, the 6.4-inch FHD+ Super AMOLED display is one of the Realme 9 4G’s key attractions. The screen is protected by Corning Gorilla Glass 5, and perhaps more importantly, supports a fast refresh rate up to 90Hz as well as a touch-sampling rate of 360Hz. The high refresh and touch-sampling rates, of course, make the screen smoother and more responsive to use than most competing smartphone displays, which normally pack 60Hz panels. The AMOLED screen even has an embedded fingerprint reader for fast and convenient unlocking.

Inside, the brand has opted for the 6nm Qualcomm Snapdragon 680 4G platform, which you’ll find in many mid-tier handsets that have come out of 2022. That’s actually a good thing, since the Snapdragon 680 is one of the most capable and efficient processors available today — able to handle intensive games with stable performance. However, the absence of 5G is likely to be a deal-breaker for those who are in the market for a phone that supports the latest and fastest mobile data standard.

For taking pictures and videos, the Realme 9 4G sees a triple-camera array on the back headlined by a 108-megapixel Samsung ISOCELL HM6 image sensor, which the unit debuts. The new sensor uses what Realme calls a NonaPixel Plus layout (3×3 binning). It is said to increase the sensor’s light-gathering ability by 123% compared with the older ISOCELL HM2. Selfies are handled by a 16-megapixel front-facing camera.

That’s it for our initial impressions of Realme’s latest 9 series model. Stay tuned for our full review next week once the company’s local embargo lifts.