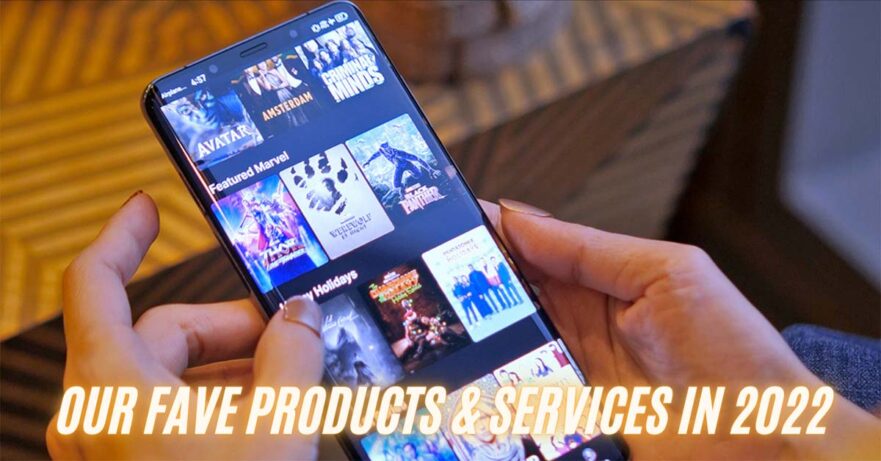 We’ve been spoiled for choice for impressive gadgets and services in 2022.

Working in this industry is both a blessing and a bit of a curse. You get to try a lot of products before they hit retail, but you almost always don’t get enough time to spend with them. You can get jaded with technology, too. But every once in a while, there’s a standout that absolutely hits home — whether it’s a new smartphone or a service we can’t recommend enough.

It was impossible to compile the classic top 10; we ended up with 11 that deserved a spot on our end-of-year shortlist. So without further ado, here are the products and services we tried and loved in 2022, in no particular order. Do share those that made it to your list, too!

The so-called “Netflix of gaming” continues to have a strong close to 2022, ending the year with a mix of expected smash hits like titles like Lego Star Wars: The Skywalker Saga and High on Life as well as pleasant surprises like Chained Echoes. December also introduced many Riot Games perks to PC and Xbox Game Pass subscribers, allowing them to unlock all — yes, all! — champions in Valorant, League of Legends, and League of Legends: Wild Rift (in January 2023), among other benefits.

For those who live in the Philippines, 2022 also saw the launch of PC Game Pass in the country, so PC owners can play over 100 games on their Microsoft Windows-based systems for a low monthly fee — without using a VPN service. Honestly, if you love playing video games and you’re still not a Game Pass subscriber, you’re missing out on a ton of familiar and hidden gems on the PC platform.

After months of waiting and teasing, Disney Plus is finally in the Philippines to give local fans something to cheer about during the holidays — and keep them glued to their screens in the process. The timing couldn’t have been better, too, with the Netflix competitor bringing in some serious draws from the Marvel and Star Wars franchises for its local debut. Andor is arguably the best Star Wars show yet and a shining example of a standalone Star Wars project.

Besides lots of family-friendly content and superhero blockbusters, Disney Plus in the Philippines also boasts some highly popular series from Star, including Family Guy, Bob’s Burgers, Spy x Family, The Kardashians, and all 34 seasons of everyone’s favorite nuclear family, The Simpsons. Its membership rates are cheaper compared to Netflix, too, especially if you take advantage of annual-subscription offers courtesy of GCash and Alipay.

Seriously, who hasn’t heard of GCash? If you’re not from around these parts, you automatically get a pass, of course, but those of us who live here don’t. Globe‘s do-it-all mobile wallet is easily more popular than the competition and now boasts over 71 million registered users as of the company’s latest earnings report. That’s more than the populations of the United Kingdom, New Zealand, Malaysia, Thailand, and South Korea!

GCash is reliable and easy to set up, and you can use it to pay for practically everything from coffee and groceries to household bills and plane tickets. We even use it to tip our deliveries and transport bookings. Services like GCredit, which is integrated into GCash, also let us pay in select establishments using credit. We can’t stress enough how many times this helped us avoid embarrassing “I forgot my wallet” moments while queuing for a cup of coffee or a bag of groceries.

We’ll probably remember 2022 as the year we stopped using Shopee as our go-to shopping platform. A quick search on the internet would turn up so many horror stories about parcels not being shipped on time, if at all, and complaints falling on deaf ears. We can personally attest to this, as our most recent Shopee order missed its expected date of delivery by more than a week before being told that an unsuccessful delivery attempt was made. We’re still waiting for an update on our refund as of this writing.

By contrast, all our Lazada orders this holiday season arrived on time, if not earlier than promised. Not only that, we noticed that our packages from Lazada were handled with better care, particularly those that needed to be shipped in large boxes. Perhaps 2023 will give us a reason or two to use Shopee again, but as it stands, we’re closer to hitting the “Uninstall” button than the “Add to cart” one.

We’ve known about Smart Communications‘ unlimited data packages for a while, but it wasn’t until this year that we subscribed to one of them as a backup to our existing fiber connection. We can tell you we have no regrets so far apart from the unexpected price hike, which may turn some users away in favor of something a little cheaper. For just P699 (around $13) monthly — or a fraction of what we pay our home-internet provider — we get unlimited 5G data in our area that basically rivals what our fiber-based connection provides.

If you’re thinking of going this route as your main internet service at home, we highly suggest picking up a 5G modem with a SIM slot and pairing it with a Wi-Fi 6 router like Huawei‘s fantastic quad-core WiFi AX3, which is priced at P4,199 ($75) in the Philippines, to get the best experience and minimize the heat generated by the 5G modem.

The most impressive Huawei phone we’ve used to date, the Mate 50 Pro takes better photos than any mobile device we’ve tested in 2022, and we’re certainly not alone in saying that Dxomark’s top camera phone is a cut above the competition. The rest of the hardware is impressive as well, with the orange vegan-leather variant shipping with scratch-resistant Kunlun Glass and a Qualcomm Snapdragon 8 Plus Gen 1 chipset coupled with a generous 512GB of storage under the hood.

And thanks to virtualization apps like GBox, you can easily install and run your favorite Google services and apps like the Play Store on Huawei devices that don’t ship with GMS, such as the Mate 50 Pro. If you are thinking of pairing the newest Mate with a postpaid plan, you may want to check out what local telco Globe has on offer, as you can potentially get the standard version of the smartphone without a cashout under Globe’s GPlan 2499.

Infinix Mobile has launched several devices this year that caught our eye, but none is as impressive as its latest — and most ambitious — flagship smartphone. The Infinix ZERO ULTRA 5G arrives with the brand’s concept-turned-reality 180-watt Thunder Charge technology, which allows the phone to charge from 0% to full in as fast as 12 minutes, and a 200-megapixel Isocell HP1 camera sensor, making it the sharpest smartphone camera sensor we’ve tried by far, among other key attractions.

It’s got a smooth 120Hz AMOLED screen, a capable and efficient processor with a 5G modem, and a premium glass design to go along with curvature on the front and back. And as if that’s not enough, the ZERO ULTRA also turns heads, thanks to its competitive local pricing especially online. In the Philippines, you can buy the lone 8GB/256GB variant in Coslight Silver or Genesis Noir for P21,999 ($395) or at a lower price during sale events.

We dubbed the OPPO Find N the “best foldable you can’t buy” in our video, because there’s plenty to like about OPPO‘s first commercial foldable outside of its vibrant, tablet-sized foldable OLED screen that doesn’t have a crease despite being made of glass. There’s the convenient cover screen with Corning Gorilla Glass Victus; the triple camera on the back that takes pretty pictures; the Qualcomm Snapdragon 888 5G SoC inside; and the 4,500mAh battery that supports 33-watt fast charging to note as well.

Unfortunately, getting your hands on the Find N might be easier said than done, as the company has no plans of making the first-gen foldable available outside China. Maybe its cousin, the Find N2 Flip clamshell phone with a poseable hinge, will find its way to the Philippines early next year. We’re crossing our fingers!

The Vivo X80 Pro may be one of the first flagship phones we reviewed this year, but it nonetheless remains one of our favorite phones in 2022, thanks to its combination of stylish hardware and impressive camera chops with Zeiss lens and Vivo‘s self-developed V1 Plus ISP at the helm. The devie’s 80-watt FlashCharge charging allows for super-short charging times — think zero to full in under 40 minutes based on our testing — while the large in-display 3D ultrasonic fingerprint reader is likewise blazingly fast and makes unlocking the smartphone especially convenient.

Gaming phones still made a killing in 2022 in the Philippines, despite some manufacturers insisting consumers have no need for them. And when it comes to top-specced units that almost seem like overkill, there is, to our knowledge, nothing on the local market that comes close to what the ASUS ROG Phone 6D Ultimate offers, both in terms of raw performance and dedicated gaming accessories.

The MediaTek Dimensity 9000 Plus-based gaming handset is easily the best-performing Android we’ve tested so far, though it’s a bit pricey for any smartphone type, coming in at P69,995 ($1,257) at local retail. Still, if money is no issue, the ROG Phone 6D Ultimate will spoil you with its speed plus a few unique features. All hail ASUS‘ king, indeed!

Samsung‘s Galaxy Z Fold4 may be the company’s most powerful foldable yet, but in terms of improvements under the hood and elsewhere, the Korean manufacturer’s clamshell-type foldable impressed us the most. Not only does it share the same IPX8 water- and dust-resistance rating and the same top-shelf processor as the Fold4, the Samsung Galaxy Flip4 boasts a 3,700mAh battery as well for better endurance.

In the Philippines, the Samsung Galaxy Z Flip4 starts at P58,990 ($1,059) for the base configuration with 8GB of RAM and 128GB of storage. Not a bad deal considering its avant-garde design and future-proof performance.