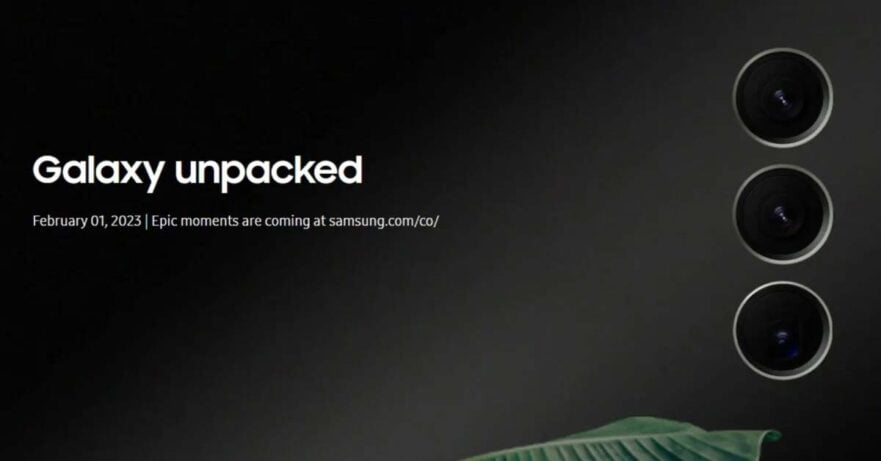 It turns out the rumors were true: Samsung will indeed launch its next flagship series next month.

No less than Samsung Colombia revealed the date of the upcoming Galaxy Unpacked 2023 event, which is set to reveal the Samsung Galaxy S23 series on February 1. According to the company’s website for the Colombian market, the event will tease a tagline that reads, “Epic moments are coming.”

Unsurprisingly, that page has now been removed — but the internet is forever. It’s likely that the event would be livestreamed on Samsung’s official website and YouTube channel as well as on Samsung Newsroom.

The promotional image on the site also confirms the rear design of Samsung’s next-gen lineup, which will sport individual camera rings similar to the leaks we’ve seen earlier. The Galaxy S23 family is expected to consist of three models, namely the Samsung Galaxy S23, Samsung Galaxy S23 Plus, and Samsung Galaxy S23 Ultra. It could go on sale as early as the second week of February, per previous reports.

The Galaxy S23 phones will reportedly feature a custom Qualcomm Snapdragon 8 Gen 2 chipset with a faster clock speed, alongside up to 12GB of LPDDR5X RAM, UFS 4.0 storage, and the latest version of One UI based on Android 13. All three may ship with 45-watt wired charging as well, which is disappointing considering where other Android OEMs are with their fast-charging technologies at the moment. Realme will unveil the GT Neo 5 as the world’s first smartphone with 240-watt charging support next month as well.

The top-of-the-line Samsung Galaxy S23 Ultra will feature a 200-megapixel image sensor with optical image stabilization, while the standard Galaxy S23 and Galaxy S23 Plus might arrive with a 50-megapixel primary camera.

The 200-megapixel sensor is said to be able to shoot in three resolutions depending on the subject and lighting environment, with the default resolution being 12.5 megapixels. For selfies, all three devices will reportedly come equipped with a 12-megapixel cam.