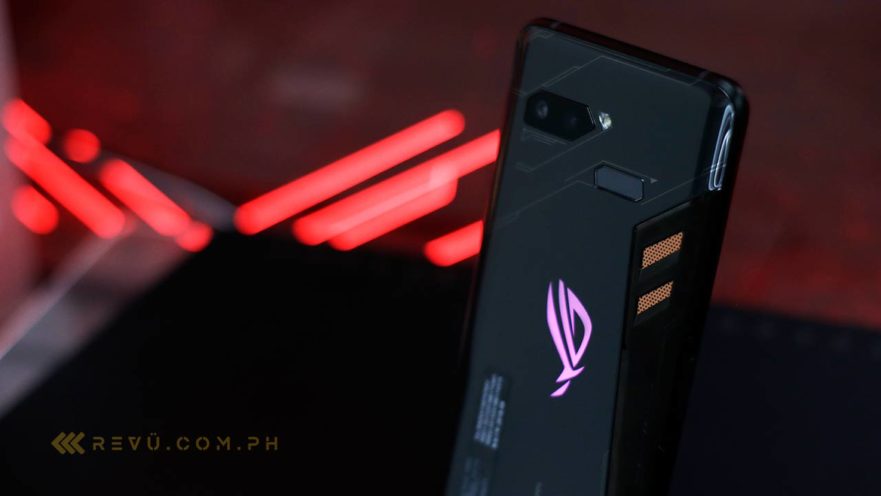 ASUS is set to launch the ROG Phone in the Philippines on October 28. It’s the company’s first gaming phone, amid the increase in interest in gaming-focused devices after the successful debut of handsets like the Razer Phone and Xiaomi Black Shark.

Mobile gaming is one of the fastest-growing new markets in the smartphone business, with the industry now estimated to be worth more than $46 billion. Just this month, three new gaming phones — the Huawei Mate 20 X, Razer Phone 2, and Xiaomi Black Shark Helo — have been launched, one after another in pretty short order.

And while most other manufacturers are already in their second attempt to impress mobile gamers, ASUS aims to get things right the first time around. 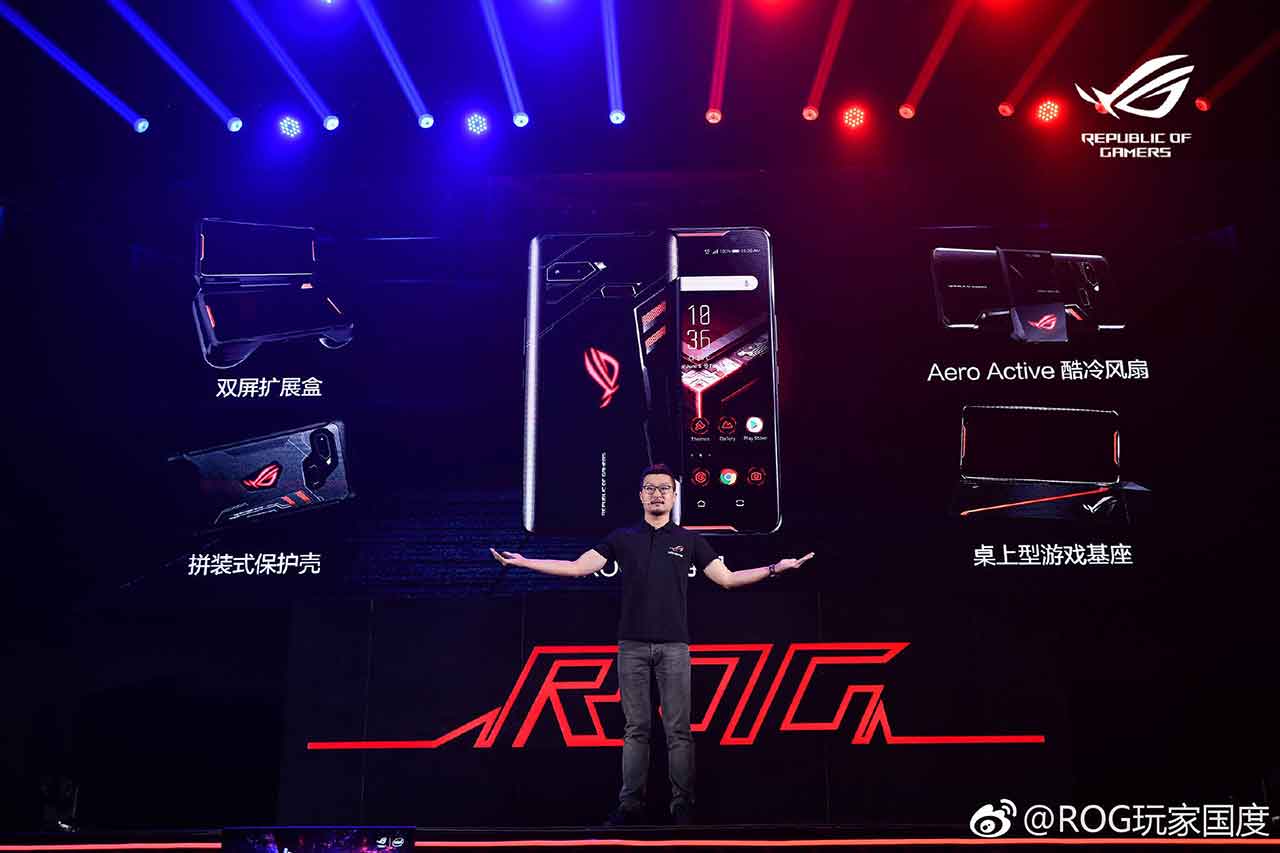 Sure enough, the ROG Phone seems to tick the boxes that matter. It’s a proper gaming phone — delightfully fast, aggressively styled and cooled, and it launches with a raft of peripherals that serious gamers may want to throw their money at.

In the Philippines, the ASUS ROG Phone will reportedly cost P49,995 (roughly $936) for 8GB RAM and 128GB of built-in storage. Word is the P61,995 ($1,160) version ups the storage to 512GB. Pricing for first-party accessories will be revealed soon after the ROG Phone debuts in the country, we’re told.

On the outside, the ROG Phone looks the part of a device whose whole existence is pinned to the assumption that gamers want their phones to look and function like gaming laptops. The front looks more understated than the back panel, where there is plenty more to talk about. The OLED screen measures 6 inches from corner to corner and has front-firing, copper-colored speakers mounted on its top and bottom bezels.

The stereo speakers themselves, which have their own dedicated amps, sound loud and reasonably rich, but like most smartphone speakers, sound quality deteriorates the louder they get. Our only gripe is that our hands tend to cover them while we’re gaming. 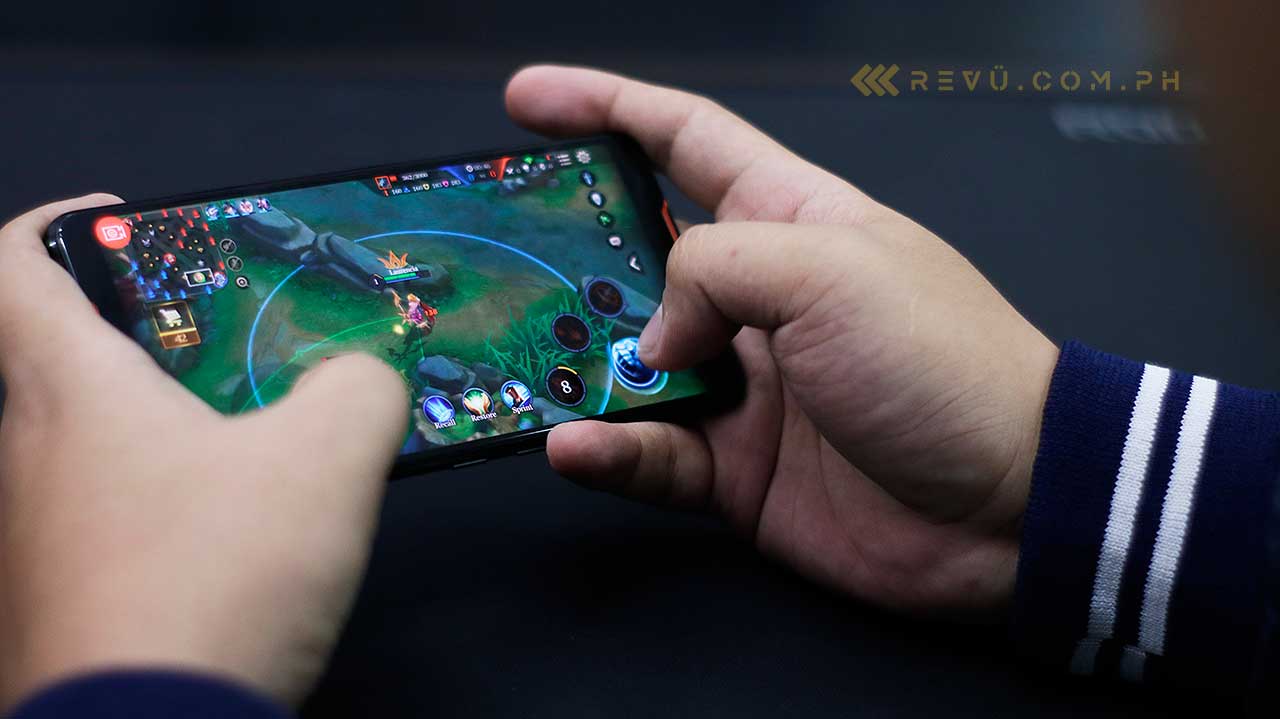 There are two AirTriggers or pressure-sensitive areas on the chassis that act like shoulder buttons when holding the ASUS ROG Phone in landscape orientation.

While we’re on topic, there are two AirTriggers or pressure-sensitive areas on the chassis that act like shoulder buttons when holding the ROG Phone in landscape orientation. Another AirTrigger located along the left-hand rail, opposite the other two, is best suited for games like Pokemon Go and Dragon Project that are optimized to run in portrait mode.

We liked using them while playing Asphalt 9, because they allowed us to use turbo or drift without tapping the screen. Another use case is replacing the fire and zoom buttons with AirTriggers in battle-royale games like Free Fire and PUBG Mobile.

There are also two side-mount connectors along the edge of the ASUS ROG Phone that can be used to attach the charging cable, or to connect one of the optional accessories the device will launch with. ASUS Philippines says it will sell some peripherals but not all, which may or may not include the Gamevice controller and docking station with many ports. 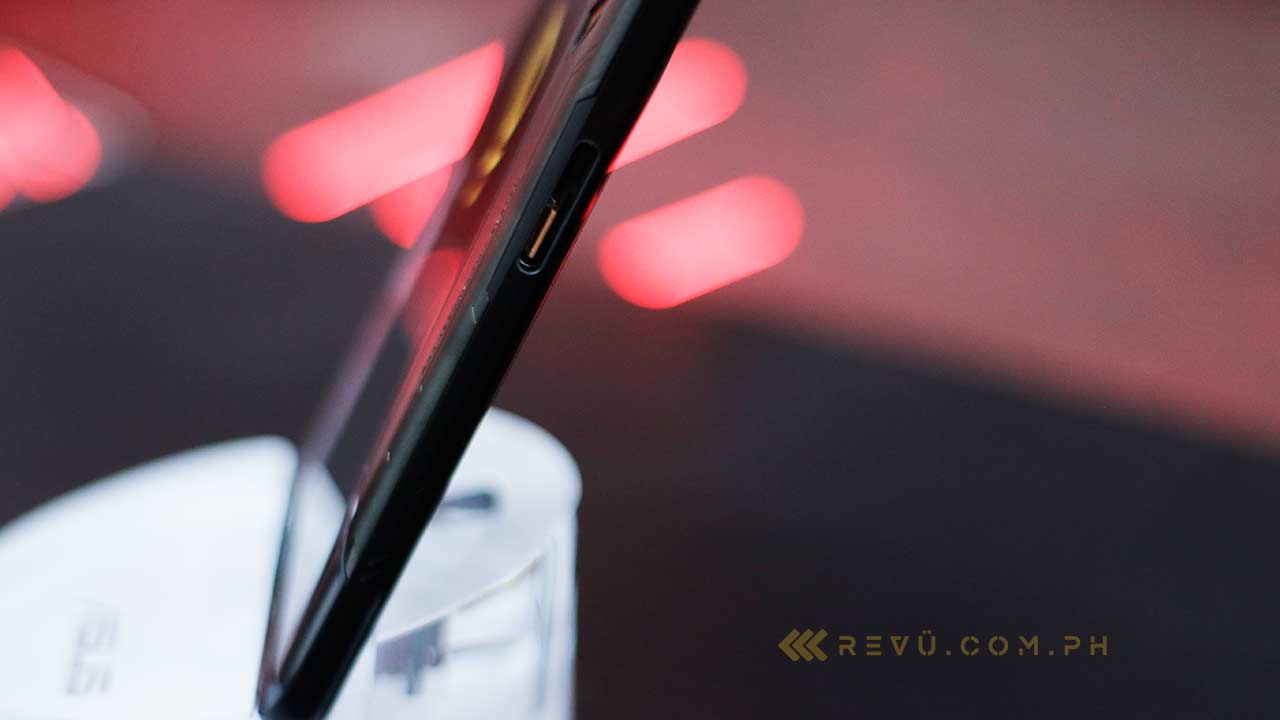 There are two side-mount connectors along the edge of the ASUS ROG Phone that can be used to attach the charging cable, or to connect one of the optional accessories the device will launch with.

A snap-on auxiliary fan is included in the retail package, as well as a protective case. The fan keeps the back of the ROG Phone actively cooled while charging and gaming in a horizontal position.

The OLED on the front looks great — just not Samsung great. But it’s vibrant, fairly sharp for its size, and bright enough for outdoor use. Of course, the biggest talking point here is the 90Hz refresh rate, which is higher than on any OLED screen we’ve seen before. It’s supposed to make motion on the screen look more fluid and less jerky. 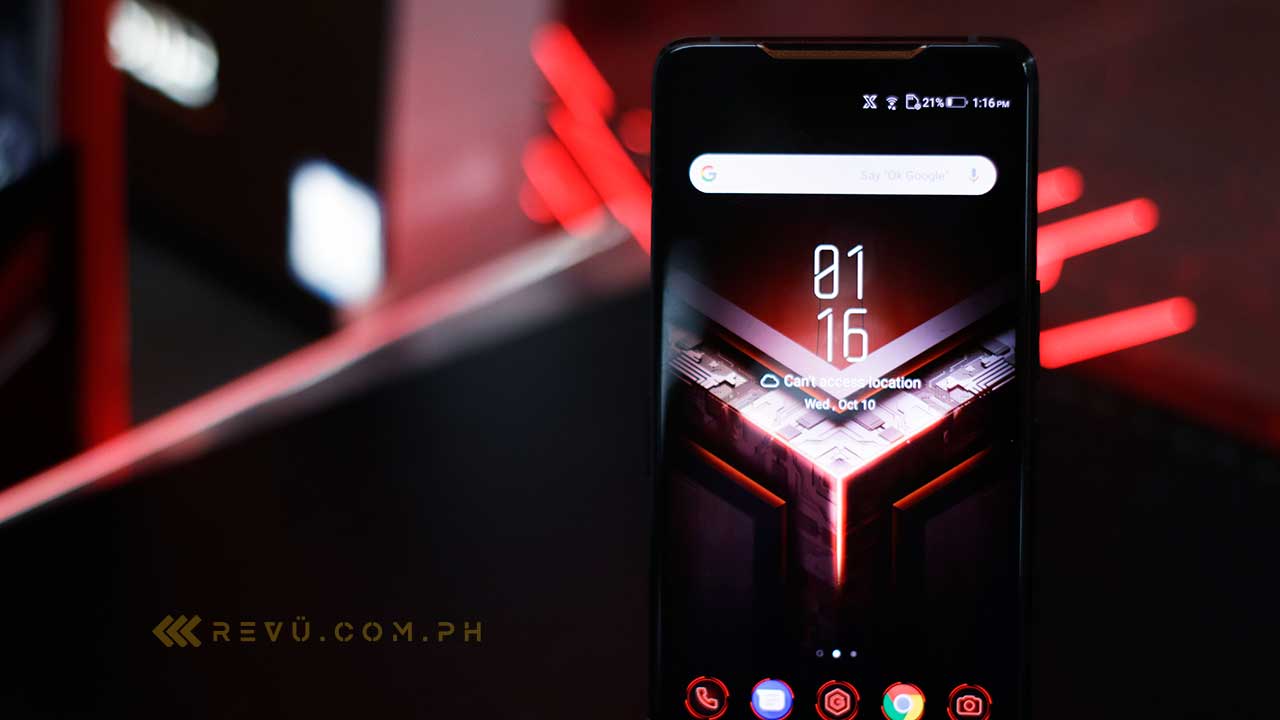 The ASUS ROG Phone screen’s biggest talking point is the 90Hz refresh rate, which is higher than on any OLED display we’ve seen before.

In our testing, the ASUS ROG Phone does make movement appear smoother overall. Even simply navigating the heavily skinned Android Oreo-based interface makes for quite an eye-pleasing experience.

There’s an option to revert to conventional 60Hz if you don’t like what you see. ASUS also allows you to set profiles for individual apps, so you can switch between the 90Hz and 60Hz refresh rates on the fly.

The backing is glossy and reflective and almost entirely glassy and gray. It’s clear that the company was going for a futuristic and high-tech look, hence the aggressive lines, bold lettering, and sharp cutouts for the awkward fingerprint reader and dual-sensor main camera. The cameras sport 12- and 8-megapixel sensors and have wide focal lengths, ideal for landscape shots and snapping pictures in cramped situations.

Then there’s the big, light-up ROG branding in the dead center. It can be customized using ASUS’ own Game Center app to ostensibly flash different backlight colors or glow in sync with other ROG products. Next to the logo are copper vents that are functional and also match the styling of the front speakers. 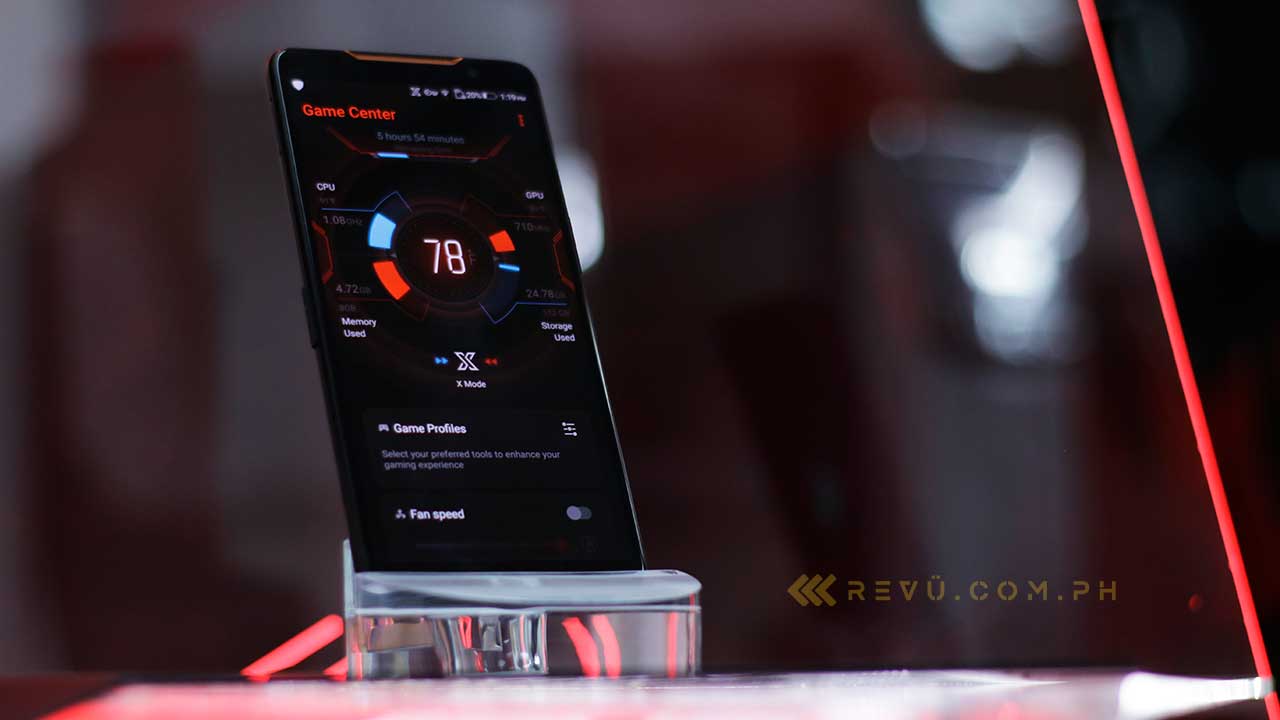 The big, light-up ROG branding on the back of the gaming phone can be customized using ASUS’ own Game Center app to ostensibly flash different backlight colors or glow in sync with other ROG products.

The overall look of the device is bold and unique in a way that hasn’t been seen in the industry. It’s potentially polarizing, even. Personally, though, we’re warming up to it. Our sense is that people are warming up to it in general, too.

Powering the ASUS ROG Phone is a custom Qualcomm Snapdragon 845 chipset speed-binned to 2.96GHz — the fastest on the market where it’s usually 2.8GHz. The processor is mated to a generous 8GB of RAM for faster loading and smoother multitasking.

Predictably, the ROG Phone did justice to all the games and apps we tested on it without any signs of sluggishness at any point. But then again, we expected nothing less from such a high-end gaming phone.

Gaming on the ASUS ROG Phone: Arena of Valor

Also inside is a 3D vapor-chamber cooler, which is basically a flat copper heatpipe with carbon cooling pads attached to the main circuit board. This supposedly allows for up to 16 times more heat-dissipation area than the normal smartphone-cooling design, thus allowing the ROG Phone to work at peak speeds for longer periods.

As all the testing we’ve done has been in an air-conditioned environment, we can’t vouch for how effective the device will be in real-world situations. We’ll keep you posted once we get more hands-on time with it.

The 4,000mAh battery supports 30-watt fast charging with the bundled wall adapter. We’re told it should last you well over four hours of continuous gaming in one charge. Not bad. 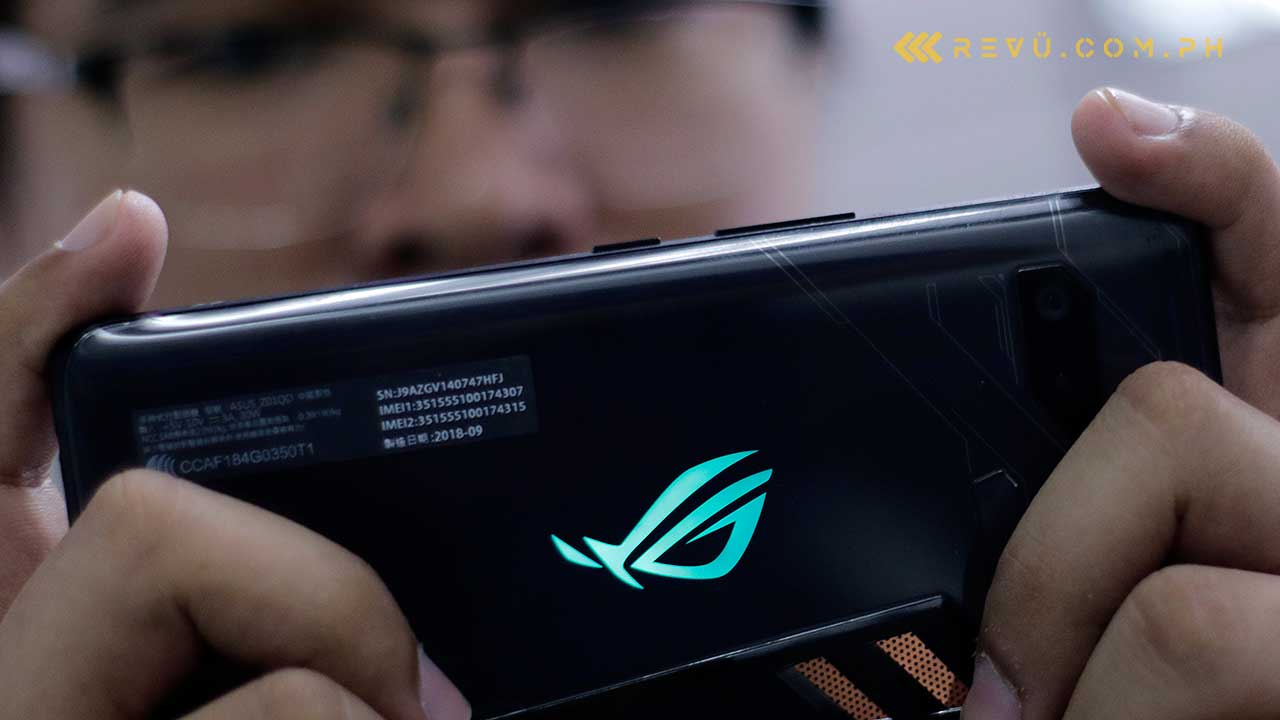 If mobile gaming is more your thing and money isn’t a concern, then the ASUS ROG Phone is likely the best way to go.

As a gaming phone, the ASUS ROG Phone absolutely delivers. And in daily use, it’s one of the smoothest phones out there, thanks to its 90Hz display.

The chassis unmistakably belongs to a phone designed for gaming first and foremost. And the portfolio of first-party accessories that ASUS will have on offer are actually exciting and may prove worthwhile for their intended audience.

If mobile gaming is more your thing and money isn’t a concern, then the ROG Phone is likely the best way to go.