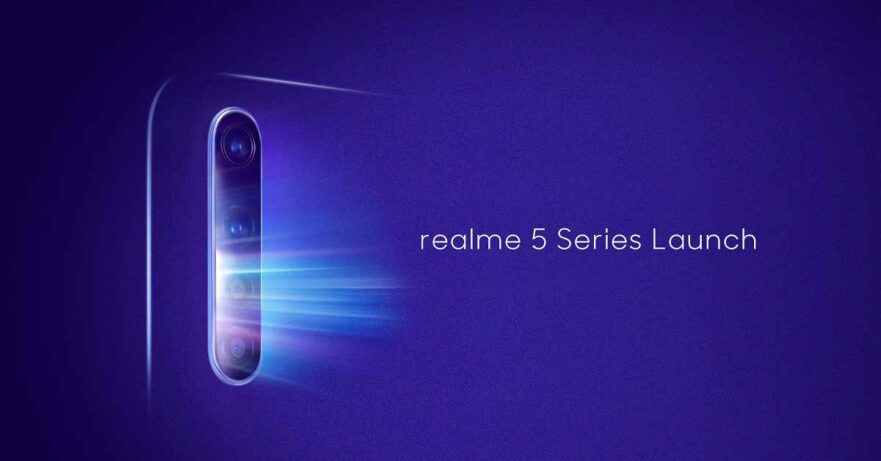 Realme has announced it will launch the Realme 5 series of smartphones next week.

Debuting in India August 20, the Realme 5 and Realme 5 Pro are successors to the Realme 3 and Realme 3 Pro. We’re not sure yet if the regular unit boasts a 48-megapixel Sony IMX586 sensor, but the Pro model definitely has one. The brand even claims that the unit is India’s first 48-megapixel quad-camera phone in its segment.

A tweet by the company’s CEO in the Southern Asian country, Madhav Sheth, suggests we should also expect a macro lens with a 4cm focal length and a wide-angle lens with a 119-degree field of view.

#LeapToQuadCamera!
4+48+586+119
RT and tag 4 friends to make your #Quad5quad to guess what these numbers mean and win big!
Stay tuned as we launch #realme5series live at 12:30 PM, 20th August! pic.twitter.com/LEISsFeNJB

But don’t look forward to a 64-megapixel camera on either the Realme 5 or Realme 5 Pro. That feature will reportedly be reserved for a higher-end handset — likely the successor to the Realme X, which we might see October 27th.

The former OPPO sub-brand previously announced it plans to release in 2019 a total of three smartphones equipped with quad rear cameras.

SEE ALSO: All upcoming Realme phones will have 4 rear cameras

The Realme 5 and Realme 5 Pro should still be a welcome upgrade from the previous models. The latter use a dual-camera setup, so it would be nice to see two more cameras on the upcoming devices. Not that the number of cameras translates into better-quality pictures. However, Realme products are generally great for photography.

We don’t know a lot else about the Realme 5 and Realme 5 Pro, but because the company is known for teasing its phones prior to release, more so than other brands, we expect to hear more details soon. Hopefully, the Philippines will be one of the markets to release the handsets after India.