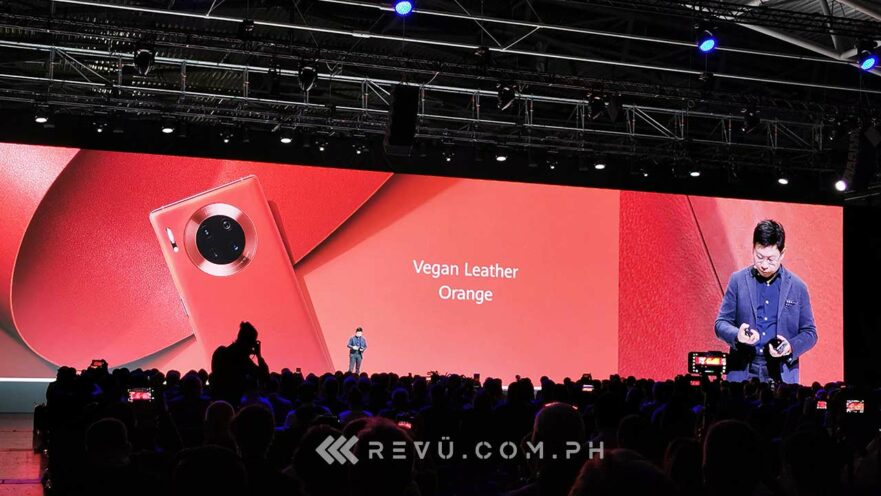 For Huawei, the rollout of 5G brings with it the opportunity to rethink possibilities in smartphone technology. And that’s what it did with the 2019 Mate series.

The higher-stacked star of the company’s global launch held here in Munich, Germany — the Huawei Mate 30 Pro — in particular, is a showcase of rethinking design, performance, photography and videography, and interaction.

In Europe, the smartphone comes with the following price tags:

As prices tend to be higher in Europe, expect the handset to be more affordable when it arrives in the Philippines.

The Huawei Mate 30 Pro has moved on from the Mate 20 lineup‘s square matrix camera array, something that you can now see on devices like the Apple iPhone 11 models. It has opted to use the design of a DSLR as an inspiration and came up with a circular, metallic quad-camera setup that the technology giant calls Halo Ring.

The 6.53-inch OLED screen Huawei refers to as Horizon Display goes from edge to edge and curves at an 88-degree angle. The top features a notch that’s narrower than the Mate 20 Pro’s; it houses the selfie camera, ambient light and proximity sensor, 3D depth camera, and gesture sensor.

READ ALSO: Huawei Mate 30 launched, too. A comparison with the Pro here

The Intuitive Side-touch Interaction feature replaces the physical volume keys with touch-sensitive areas that function as invisible virtual buttons. What’s more, you can customize the position of those keys. Lefty? Use the ones on the left. Not? Use the one on the right side. Brilliant, really.

The colors available for the Huawei Mate 30 Pro are stunning. We already know that there are Space Silver, Emerald Green, Cosmic Purple, and Black options, but what have made us sit up and take notice all the more are the Vegan Leather Orange and Vegan Leather Forest Green versions.

Inside the Huawei Mate 30 Pro is the most advanced chipset to date, the Kirin 990, which became official about two weeks ago at the IFA 2019 technology show in Berlin.

Kirin 990 has six “world’s firsts” under its belt:

The Mate 30 Pro — at least the 5G version, which is considered the world’s first second-generation 5G phone — also features 14 antennas for 5G.

And using the device for hours on end shouldn’t be a worry because it has a big, 4,500mAh battery with support for 40-watt wired and 27-watt wireless fast charging. It comes with it upgraded reverse wireless charging as well.

Fitted with arguably the most impressive camera hardware on any smartphone, the Huawei Mate 30 Pro sees a quad-lens setup featuring two 40-megapixel sensors for photo and video, an 8-megapixel telephoto camera that enables 3x optical zoom and 30x digital zoom, and a 3D depth sensor that will help you take professional-looking portraits.

The Mate 30 Pro’s video-recording capabilities are equally impressive. Besides the ability to shoot 4K resolution at 60 frames per second, it can take super-slow-motion footage at 7,680 fps in HD. Take note that the maximum fps other smartphones can reach is 960.

Fire up your imagination with the #HuaweiMate30 Pro super slow-mo capabilities.

Also notably, this Mate can do 4K time-lapse with HDR+ colors, and the ISO can hit up to 52,000 when recording video, which is unheard of and will allow you to shoot in just about any lighting condition.

We’re bringing our low-light photo expertise to video, so your films with the #HuaweiMate30 Pro stand out – even on the darkest night!#RethinkPossibilities pic.twitter.com/1uwpz8gz0w

The front-facing 32-megapixel camera sits next to a 3D depth sensor that delivers better bokeh effects when taking portrait selfies.

To deliver a smoother and more intuitive user experience than ever before, the Huawei Mate 30 Pro includes several new software features. The phone runs EMUI 10 out of the box.

EMUI 10 brings a contemporary magazine-inspired interface, along with an always-on display that changes in color based on whether it’s day or night. There’s also an improved system-wide Dark Mode that is easier on the eyes and can be applied to apps that use Huawei’s new Dark Mode engine.

EMUI 10 demo at the Huawei Developers Conference 2019 in China

The Mate 30 Pro’s face unlock and gesture sensors also enable AI gesture control, which allows the user to navigate and interact with the screen without touching it and watch videos in landscape mode regardless of the position of the user’s eyes when the AI Auto-Rotate feature is enabled.

AI Private View, on the other hand, prevents other people from seeing your personal messages, using the laser-based face-unlock system in front to determine whether you are looking at the display or not.

HiCar brings hands-free calling, texting, and music playback to your car’s infotainment system, while Multi-Screen Collaboration will let you seamlessly transfer data and interact with multiple screens between Huawei devices.