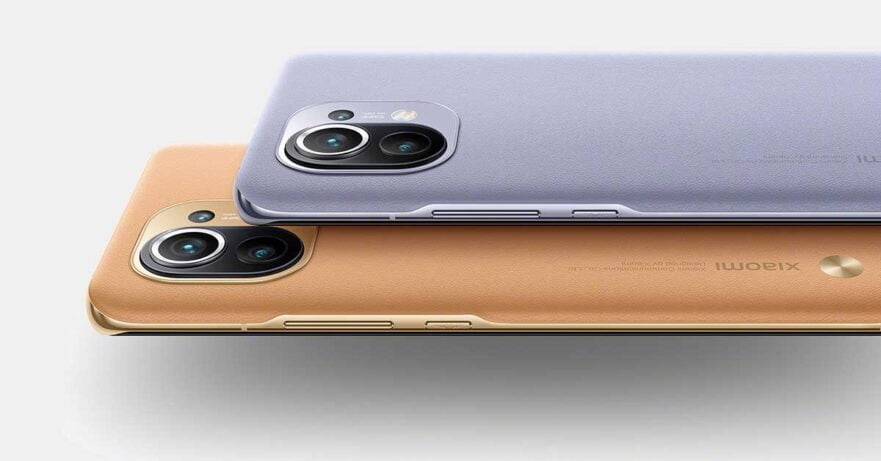 Xiaomi just took the wraps off the Mi 11 in China, debuting the successor to its successful Mi 10 lineup. Unfortunately, we didn’t see a Pro variant during the launch’s keynote, but considering everything the latest Mi flagship has to offer, including a sizable quad-curved 2K screen and cutting-edge internals, we doubt anyone was seriously disappointed especially given the local pricing.

(Update, February 8: And it’s launched internationally! The global version of the Xiaomi Mi 11 ships with a 55-watt charger and comes in two variants.)

Faux leather for two of them? Check! Watch this official video to appreciate this version more. We’re loving the brown one!

In China, the Mi 11 will be available beginning January 1, 2021. It comes in black, blue, and white colors, as well as faux-leather options in brown and purple. A special edition unit with gradient coloring and Xiaomi CEO Lei Jun’s signature at the back costs ¥4,699 as well; it comes with the same amount of memory as the regular 12GB/256GB version.

For environmental reasons, Xiaomi will offer the Mi 11 without a charger and cable in the box. This option costs the same as the set edition of the phone bundled with a 55-watt adapter and cable.

No word yet on when the flagship phone will be released globally, including the Philippines, but we’ll let you know as soon as we have that detail.

The Xiaomi Mi 11 features a quad-curved glass on the front that spills over to the aluminum frame, and there’s a small punch hole as well to house the single selfie camera. The top and bottom bezels seem to be slimmer this time around, but we can’t say for sure until we have the phone in our hands. It’s easy on the eyes, that’s for sure, even though not much has changed on the surface if you compare it to the Xiaomi Mi 10.

The Mi 11, similar to the Mi 10 before, packs dual speakers for stereo output. However, unlike the latter, the latest Mi flagship should deliver better sound, thanks to professional tuning from high-end audio brand Harman Kardon. During the presentation, Xiaomi’s Lei Jun talked a great deal about the phone’s loudspeaker performance, so it should be interesting to hear it in action.

At the back is where the most obvious changes have been made, specifically with Xiaomi’s option for a “squarcle” triple-camera array instead of sticking with a vertical module to hold the Mi 11’s 108-megapixel, 1/1.33-inch primary sensor with f/1.85 7P lens and optical image stabilization.

The secondary cameras consist of a 13-megapixel, f/2.4 ultra-wide-angle shooter and a 5-megapixel sensor for macro shots. On the flip side, the front-facing camera has 20 megapixels, same as the previous model.

The curved OLED display on the Xiaomi Mi 11 measures 6.81 inches across and has a 3,200 x 1,440 (aka 2K) resolution for a screen density of 515 pixels per inch. Perhaps more impressively, it can support a refresh rate of 120Hz at native resolution, something most manufacturers — including Samsung — don’t do, but should. Other notable specs: 480Hz touch-sampling rate; DCI-P3 and HDR10+ support; over 1,500 nits of peak brightness; and Corning Gorilla Glass Victus.

Xiaomi says the Mi 11 garnered DisplayMate’s highest performance grade of A+, which tells you a lot about picture quality, considering it shares the same rating as the panel on the Apple iPhone 12 Pro Max. The latter, according to DisplayMate, is “visually indistinguishable from perfect.”

The major highlight of the Xiaomi Mi 11 is the Snapdragon 888 — Qualcomm’s most powerful chipset to date and the first Snapdragon silicon built on a next-gen 5nm process. Xiaomi is the first manufacturer to go official with a Snapdragon 888-based device.

As for the chip itself, Qualcomm’s latest and greatest debuts the Cortex-X1 core, which is said to be capable of executing 33% more instructions per clock than the Cortex-A78. It also has a cluster of three Cortex-A78 cores running at 2.4GHz, plus four Cortex-A55 cores clocked at 1.8GHz. Compared to the Snapdragon 865, Qualcomm says the Snapdragon 888 is about 25% faster and 25% more power efficient.

Also notably, the Snapdragon 888 boasts Adreno 660 graphics, which is said to offer 35% faster rendering performance while improving efficiency by 20%. Qualcomm designed the Adreno 660 to deliver 144 fps gameplay on games and devices that allow it, so it would be interesting to see whether the Xiaomi Mi 11 could indeed max out the frame rates on demanding mobile games.

The Snapdragon 888 is likewise the first chipset to incorporate a Snapdragon X60 5G modem, which is integrated instead of being an external chip. It supports the Sub-6 and mmWave spectrums of 5G.

Moving on to the battery and charging side, the Mi 11 boasts a 4,600mAh battery and has tech to push wired and wireless fast charging up to 55 and 50 watts, respectively. With a 55-watt charger, the Mi 11 can go from zero to full in 45 minutes, while a 50-watt wireless charger can fully recharge it in 53 minutes.