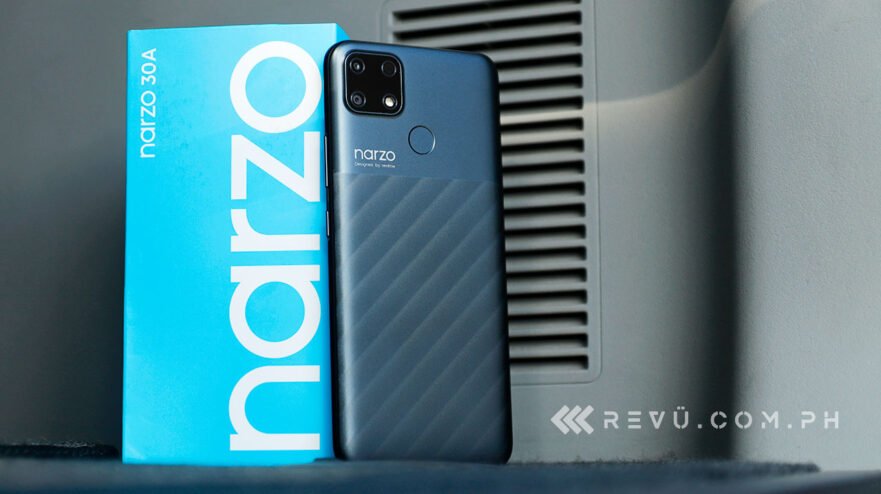 Realme Philippines has announced that the Realme Narzo 30A will be launched locally at 6 p.m. March 25, adding yet another budget challenger to its growing family of value-positioned Android smartphones. The event will be livestreamed on the brand’s official Facebook and YouTube pages.

(Update, March 26: Is the Realme Narzo 30A the #LimitlessGamingMonster that it claims to be? Check out our review here!)

Tagged by Realme as a #LimitlessGamingMonster, the smartphone is the second Narzo-branded handset in the Philippines after the Narzo 20, which was priced at P7,990, or around $165, when it arrived last year. It will become exclusively available on Lazada Philippines, initially selling at a discounted price for Lazada’s Birthday Sale on the 27th.

The Narzo 30A should be cheaper than its Narzo predecessor, with the suggested retail price of the phone expected to be in the P6,000 ($124) range based on how much it costs in India. Not to mention, Realme’s latest budget blower has lower camera specs to hit a desired price point.

It does have the same MediaTek Helio G85 SoC as the Narzo 20, with up to 4GB RAM and 64GB of internal storage as well. Performance-wise, both Narzo handsets should be about equal. We’ll report the performance scores soon, but right now, we’d like to share with you our unboxing photos plus our impressions of the Narzo 30A’s local variant.

Per usual, there are no earphones bundled with the hardware. You don’t get a free silicone case either, so you might want to order ahead of time if you intend to buy the phone at launch.

Similar to other devices in the lineup, the 30A ships in a blue box sporting Narzo’s badging on the front with bold lettering. Because of the lack of accessories inside, it’s noticeably smaller and weighs less than most other smartphone boxes.

The bundled accessories are of good quality, as expected from a well-established, big-name brand like Realme, and you get a sense that the packaging’s no-nonsense aesthetic reflects Narzo’s marketing mantra of being all about performance rather than style.

But that’s not to say the Narzo 30A isn’t a looker — it is! Its styling slightly resembles that of the first Google Pixel, except the top section replaces fragile glass with durable plastic and the bottom part features a nice 3D effect to make it seem like it has ridges. Realme has done a lot of experimenting with the design features of its smartphones, not just of those in the Narzo series.

There have been more hits than misses, thankfully, but the 30A is a definitive hit in our books. It comes with a matte finish, meaning it’s less slippery; it looks good in any color; it’s eye-catching yet still subtle; and, maybe more importantly, it’s something you would want to hold in your hands to get a better impression of the hardware and what it offers.

The Realme Narzo 30A includes a physical fingerprint scanner and two cameras at the back in a square camera module that would be a better fit for a multi-camera handset. The Narzo logo isn’t laser-engraved on the rear panel, so hopefully it doesn’t fade quickly.

As expected, this is a chunky phone owing to its 6,000mAh battery. We can still wrap our hands around it, though, which is quite a surprise. All the buttons are located on the right-hand side; they’re clicky, don’t wobble in their housings, and don’t feel cheap. Meanwhile the headphone jack and USB-C port are at the base.

The bottom-firing single speaker can get pretty loud considering its size, and we didn’t feel to pair our review unit with an external speaker while watching Coming 2 America on Amazon’s Prime Video app. Vocals sound clear enough during music playback, too.

It’s worth noting that the Narzo 30A doesn’t have Widevine L1 certification, so it won’t let you stream HD videos on Prime Video, Netflix, and other similar platforms. YouTube supports 1080p playback at up to 60 frames per second.

As for the screen, the smartphone gets a 6.5-inch waterdrop LCD display with HD+ resolution and a 60Hz refresh rate. Nothing fancy, but it should get the most out of the gaming-focused chipset Realme has opted for.

We’ll be back with our Narzo 30A performance review when Realme’s embargo lifts next week, so stay tuned for that.