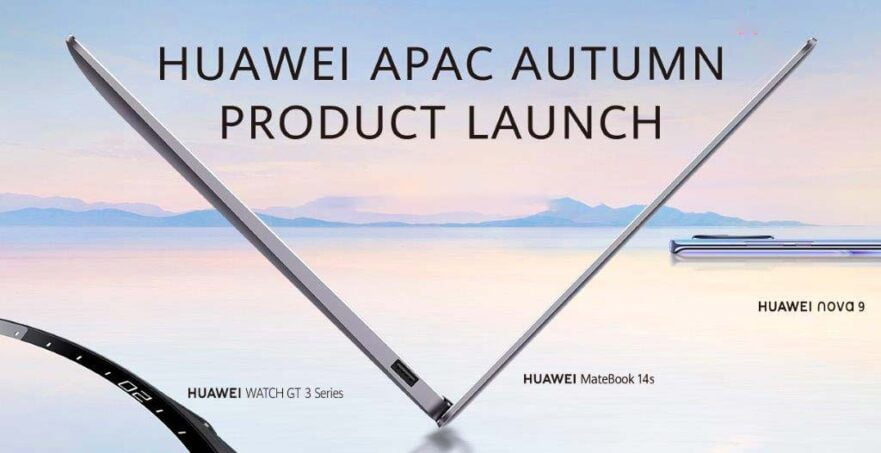 The Huawei Consumer Business Group is kicking off the last quarter of 2021 with a launch of what it calls “super devices” for the Asia-Pacific market.

(Update, November 5: Huawei has revealed the launch date of the Nova 9 in the Philippines!)

(Update, October 29: Check out the Huawei MateBook 14s’ price and preorder details for the Philippine market!)

(Update, October 20: Check out our first look and rundown of five of the most exciting features of the Huawei MateBook 14s ahead of its launch on the 28th!)

On October 28, the technology giant will make the Huawei MateBook 14s, Huawei Nova 9, and Huawei Watch GT 3 series official in the region. You can join the 7 p.m. livestream on Huawei’s website, online store, Facebook page, or YouTube channel.

Tagged as a Laptop+, the sleek-looking and portable Huawei MateBook 14s features sharpened edges. It still packs a FullView Display (read: panel with narrow bezels) with a 3:2 aspect ratio, but the resolution is already 2.5K. The screen likewise supports a 90Hz refresh rate and now houses the camera, unlike Huawei’s other notebooks, which hides the cam between the F6 and F7 keys.

SEE ALSO: Supernova with super features: What we love about the Huawei Nova 8

The MateBook 14s is equipped with the new 11th-generation Intel Core H-series processor and Intel Iris Xe Graphics. And with a maximum of 45-watt of thermal design power in Performance mode, multitasking on the laptop should be easier. You can check out the specs of the MateBook 14s that debuted in China in September below:

The Huawei Nova 9 was initially announced alongside the Huawei Nova 9 Pro for the Chinese market. As with other Nova series phones, the Nova 9 is targeted at the stylish, younger set who puts a premium on a handset’s camera. The device features a 50-megapixel quad-sensor setup on the back — called an Ultra Vision camera — and a 32-megapixel selfie shooter.

The 6.7-inch curved punch-hole screen boasts a 120Hz refresh rate. And support for Huawei’s 66W Super Charge technology is present as well. Refer to the list below for the smartphone’s full specs.

As for the Huawei Watch GT 3 series, it was previously tipped to debut alongside the Huawei Mate V flip or foldable phone and Huawei Watch D with blood-pressure-management capability. The brand calls it a “professional private trainer to guide you with more than 100 workout modes” in the press release it sent to us at Revü Philippines.