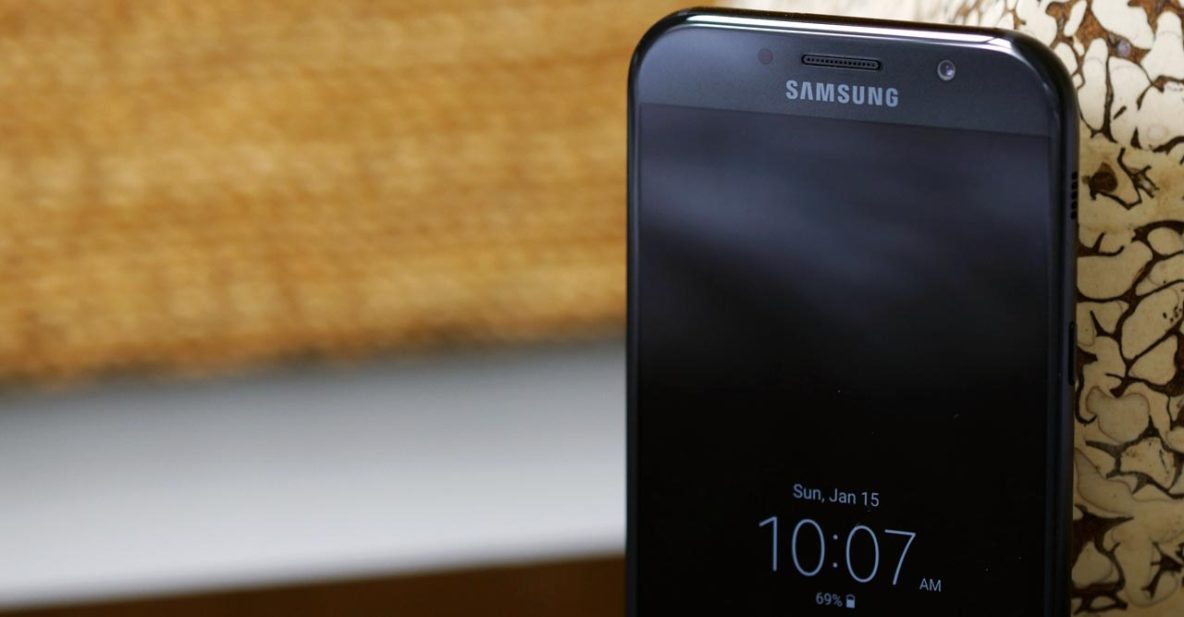 SAMSUNG announced at CES 2017 in Las Vegas this month refreshed models of the Galaxy A series phones. And as if to confirm that the Philippines is an important market for the Korean electronics giant, the new Galaxy A5 (click for complete specs) and A7 (click for full specs) have made their way to local stores (without much fanfare), where they retail for P19,990 and P23,990, respectively. The more impressive of the duo, the Samsung Galaxy A7 (2017), which has a generous screen size and battery capacity, is what we will be taking a closer look at today.

Firstly, allow us to get this out of the way: The unit in our possession is a live sample meant for store use; hence, some of the phone’s functions — its fingerprint reader and full-charging capability (the battery only charges to 70 percent), for starters — are disabled. That said, we can’t tell you how long a full charge will last, or how long it takes to power up the battery to the max (it shouldn’t take too long because the A7 supports fast charging). But we did find that the 3,600mAh cell can get us through an entire day, with some charge left over. 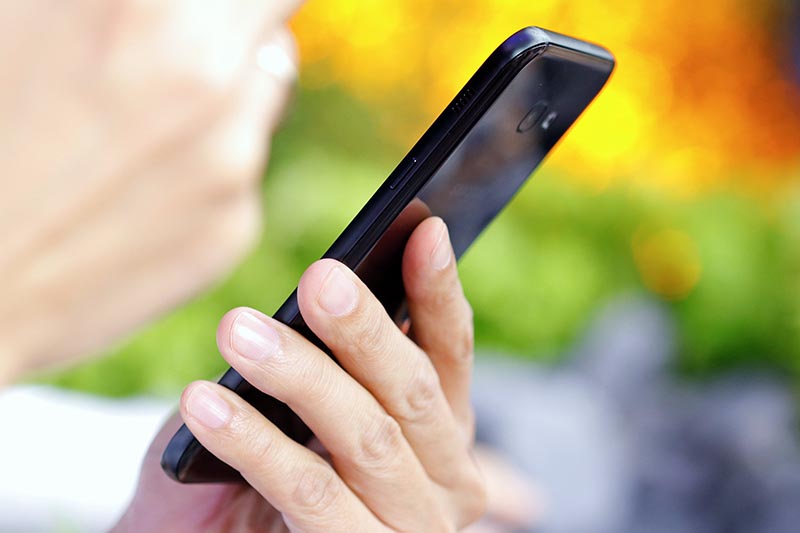 The unit in our possession is a live sample meant for store use.

As for the retail-mode apps, we’ve disabled all of them. (Don’t ask how; we won’t provide a tutorial, for obvious reasons.) So notwithstanding the non-working fingerprint hardware and slightly gimped software, our unit is as good as the one you’ll find in any given store. Are we clear about that? Good.

Moving on, the Samsung Galaxy A7 2017 edition is easily one of the best-looking phones in its price range. If you love the design of the Galaxy S7 but your wallet objects to the premium price tag, then this is about as close as you can get, provided you find the A5 rather small for your needs. The A7, in many ways, is a bigger S7, almost the size of the Note 7, but with fewer bells and whistles and at a price that won’t make you balk. 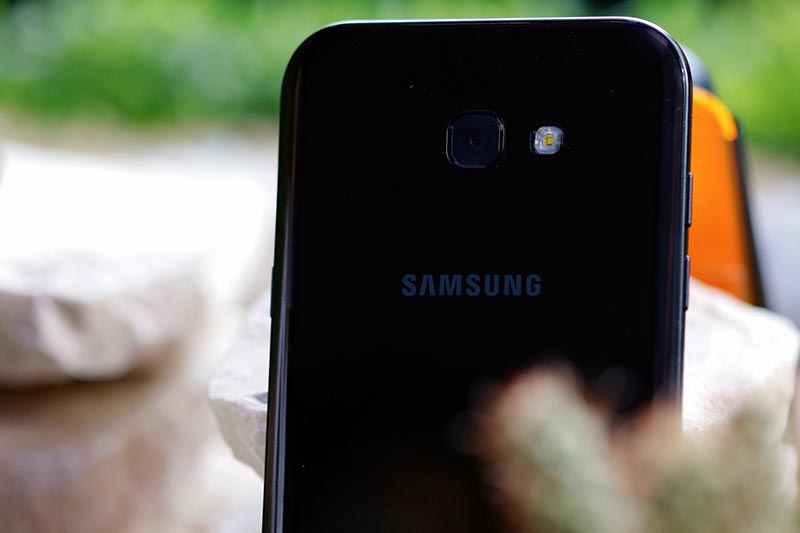 The new Galaxy A7 is easily one of the best-looking phones in its price range.

It can get soaking wet but not submerged in deep water for a long time, which is a first for the series and midrange Samsung devices in general. Its IP68 certification is the highest rating awarded to phones and tablets, higher than the Apple iPhone 7‘s, and it’s the same one that the S7 and S7 Edge carries. 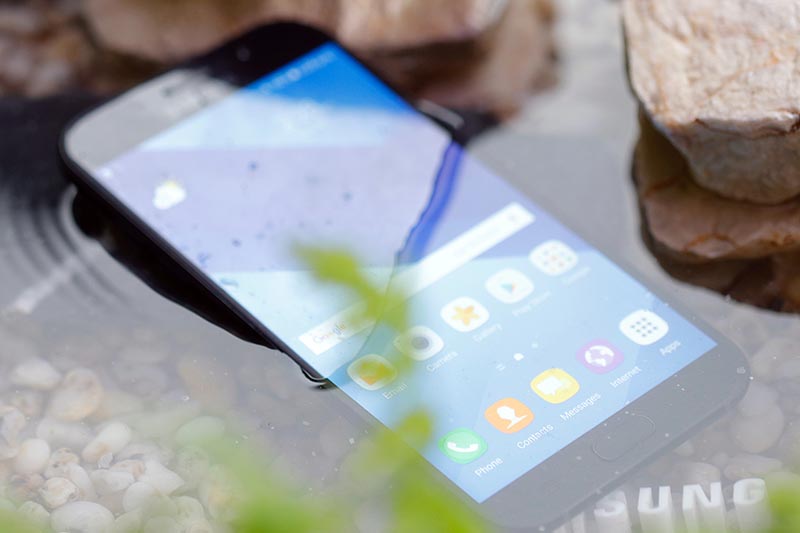 The A7 2017 edition’s IP68 certification is the highest rating awarded to phones and tablets.

And while the Samsung Galaxy A7 (2017) may not be easy to hold because of its heft and 5.7-inch screen size, it feels great in the hand, like a phone that should cost way more than it does. There’s glossy, curved-edge glass on the rear panel, like that of the S7, and the 16-megapixel main camera sits flush with the back and single LED flash.

The color of the metal frame matches the color of the phone itself (front and back). The antenna bands on the top and bottom edges are almost invisible and less off-putting than before — at least on our black unit. Speaking of, we’re well aware of what it looks like. You’re not alone in thinking it comes across as another Android handset with an iPhone-inspired finish, in this case Jet Black. Which looks really good, by the way. You can’t argue how classy it looks from all sides. The bottom edge has a pinhole mic, a headphone jack, and a reversible USB Type-C port for charging and file transfer. That’s it. 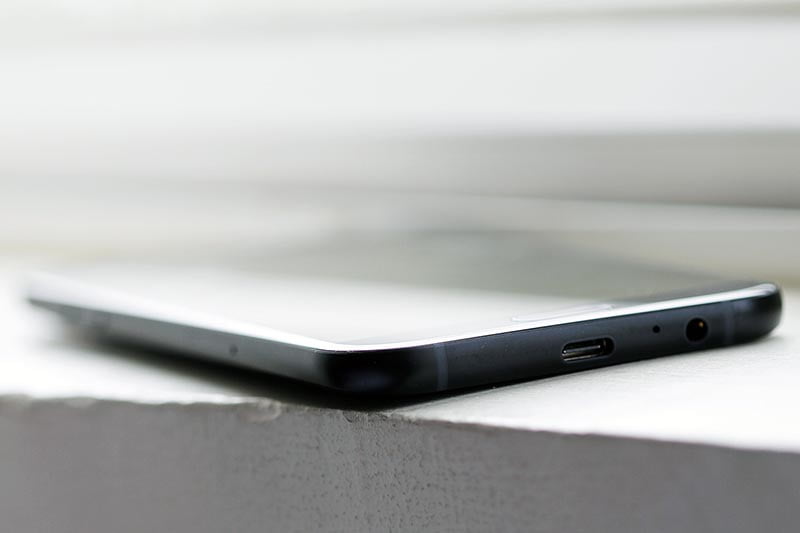 The Samsung Galaxy A7 2017 edition’s bottom edge has a pinhole mic, a headphone jack, and a reversible USB Type-C port.

If you’re wondering where the speaker is located, it’s sitting on the right-hand side, above the power button. It’s louder than we expected, surprising considering how small and inconspicuous the speaker cutout is. The placement, which we first saw on the Samsung Galaxy J7 Prime, is also apparently well thought-out, as the sound doesn’t get muffled if you lay the device flat on its face or back, or when you hold it vertically with both hands. It’s the ideal location for a single speaker, and we hope it gets adopted by future Sammy phones.

The 5.7-inch AMOLED display is set at 1080p resolution. It’s bright and vibrant, and the black levels are exactly as you’d expect on a panel of this type. And as with Samsung’s other premium displays, it comes with always-on functionality, which, as you may have sussed out, is a great way to save battery power without killing off certain features the way battery-saver mode would if it kicked in. It doesn’t display messages, and you can’t respond to them from the lock screen, though the always-on display shows the time, date, and battery percentage, and offers a variety of layouts to choose from. 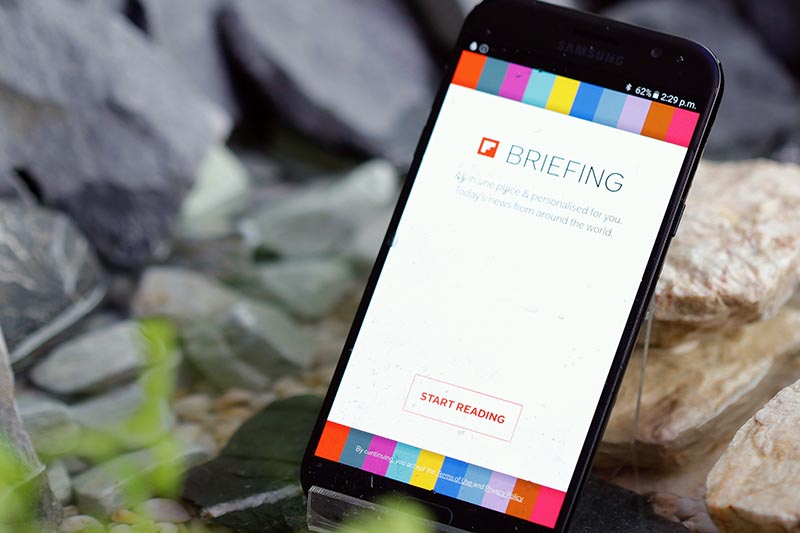 The 5.7-inch AMOLED display with 1080p resolution is bright and vibrant. 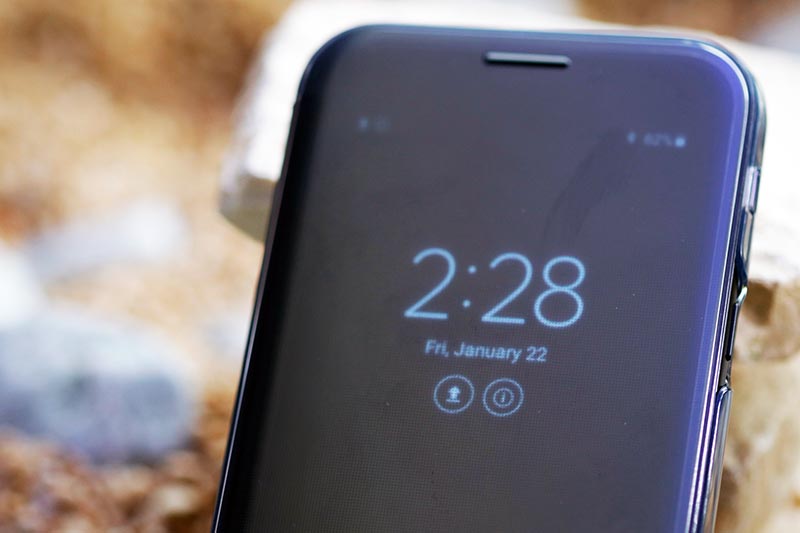 As with Samsung’s other premium displays, the 2017 A7’s screen comes with always-on functionality.

The main and secondary cameras can shoot 16-megapixel still images and up to 1080p footage, while the aperture is decent at f/1.9 on both ends. The rear-facer isn’t the best on a Samsung handset — the unit on the S7 fares a lot better, especially in low light — though the selfie camera can hold its ground against the best in the industry. Samsung isn’t marketing the A7 as an expert at taking selfies, but it really should reconsider. 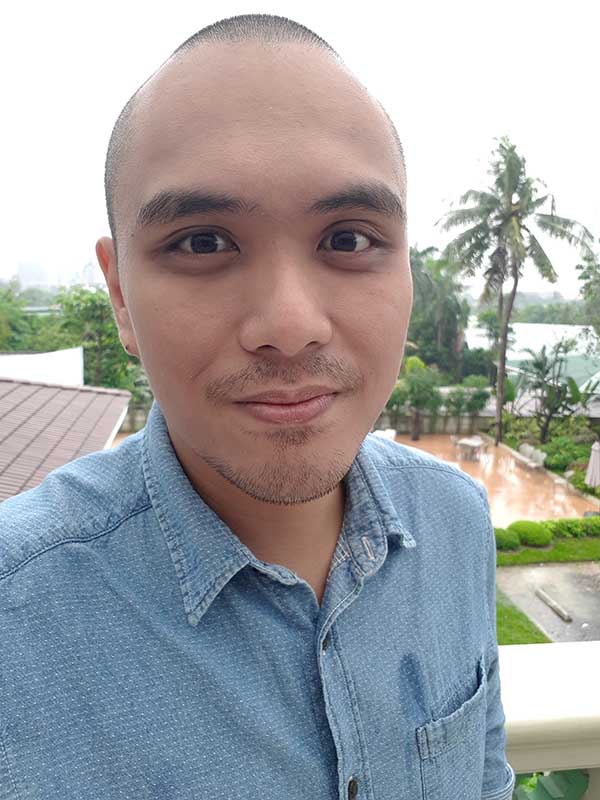 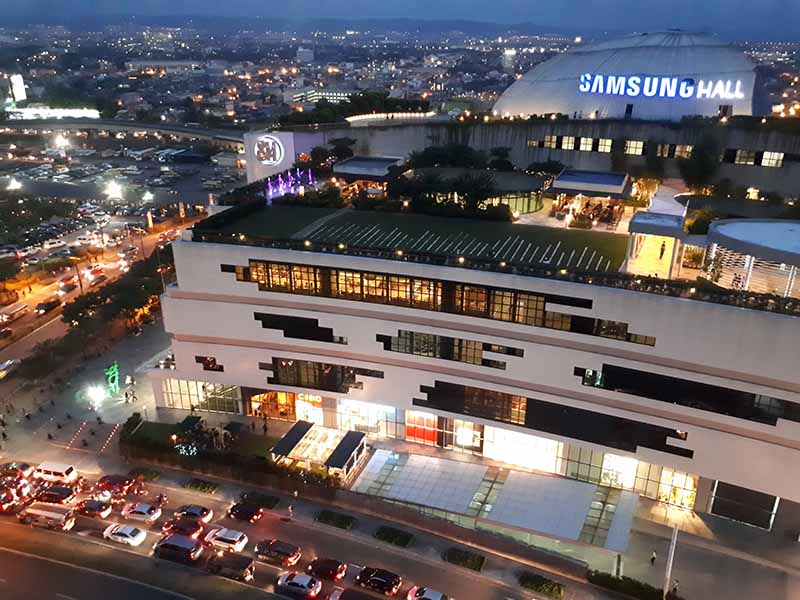 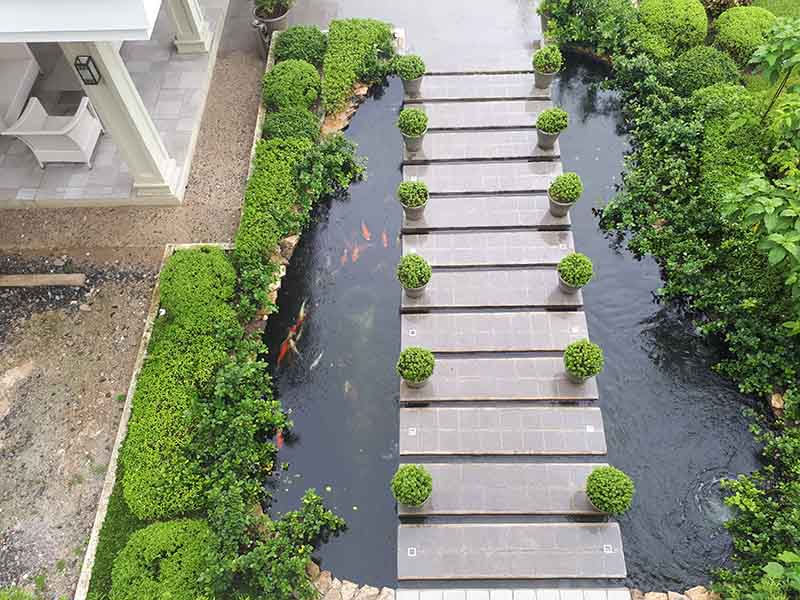 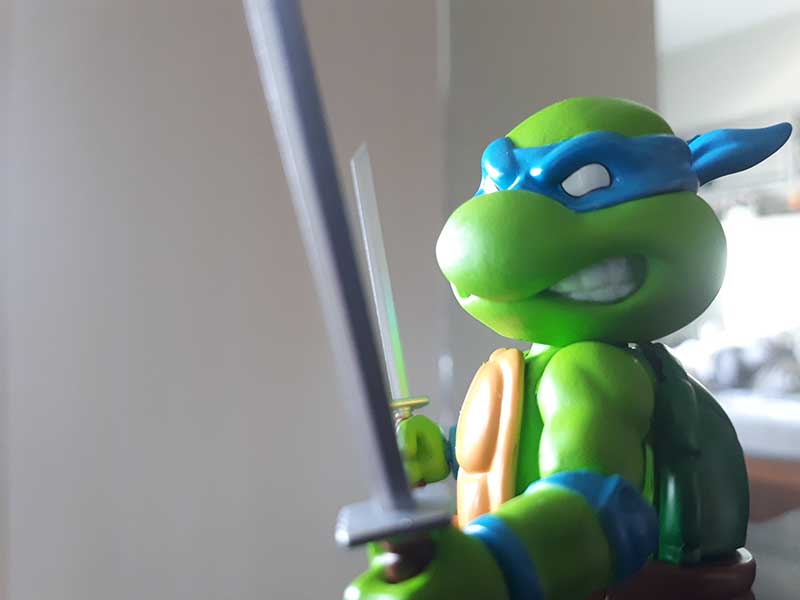 Resized sample photos taken with the Samsung Galaxy A7 (2017). Original files can be seen here.

Inside, the Samsung Galaxy A7 (2017) packs the manufacturer’s own Exynos 7880 system-on-a-chip, with eight, 64-bit CPU cores and Mali-T830 graphics. RAM is 3GB, while storage is 32GB. Performance is snappy, which is typical of mid- to high-end devices. What we’re most impressed by, however, is how power-efficient the chip can be, particularly while performing routine tasks, such as web browsing and video streaming. Another positive observation is this phone doesn’t heat up like a curling iron, or as much as some Qualcomm-based devices, during gaming. Not even after an hour of playing NBA 2K17 non-stop.

The Samsung Galaxy A7 (2017)’s performance is snappy. The chip is power-efficient. And the phone doesn’t heat up like a curling iron, or as much as some Qualcomm-based devices, during gaming.

On the software side of things, the A7 is running the latest version of TouchWiz on top of Android Marshmallow, not Nougat. The user interface, especially the settings menu and notification shade, resembles Sammy’s custom skin on the Note 7, though we can’t say for certain which we prefer.

The Galaxy A7 has Samsung starting 2017 on the right foot, clearly ready to move on from the controversy created by an exploding signature phone. It looks and feels more like a high-end effort; it’s water-resistant to a certain depth; its AMOLED screen is big and lovely and more functional; its selfie camera is just as good as the rear; and it runs fast without overheating, too. At P23,990, this new model isn’t cheap, but it’s quality stuff — arguably one of the best midrange phones around, even.