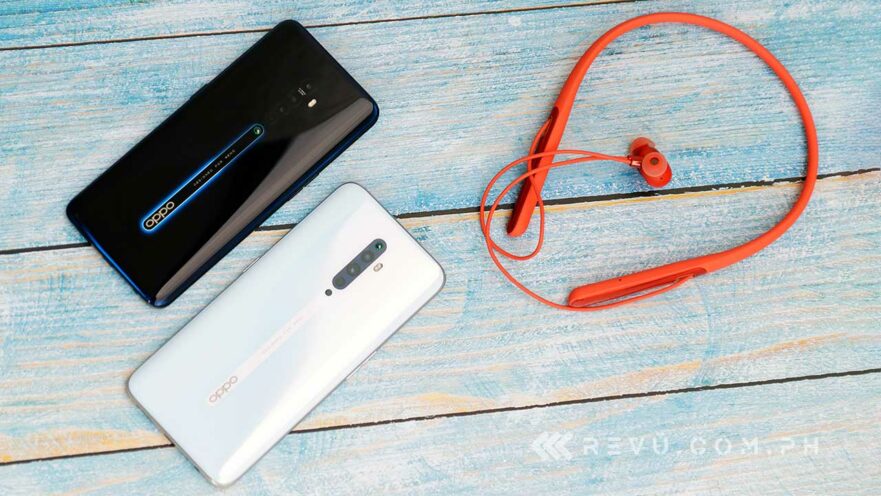 OPPO Philippines officially brings in the Reno 2 series with the launch of the OPPO Reno 2 and Reno 2F along with the Enco Q1, a new pair of noise-canceling headphones.

(Look at our update: These pictures and videos shot on the OPPO Reno 2 wow us!)

The higher-specced Reno 2 is priced at P28,990 (around $564) and comes with a Muse Bluetooth speaker as a preorder freebie while the Reno 2F is retailing at P19,990 ($389) with a free O1 Bluetooth headphones for early adopters. Reservations start October 18 and end October 24. Availability at OPPO concept stores, partner dealers, and online shops begins on the 25th.

The OPPO Reno 2 and Reno 2F share some key specs, but they differ enough that it might sway you to pick one over the other. Both come equipped with OPPO’s own ColorOS 6.1 based on Android Pie, 8GB of RAM, and 4,000mAh battery with VOOC 3.0 and 20-watt fast-charging capabilities.

The two handsets both have a quad-camera setup on the back and a motorized selfie camera in front. But there are slight tweaks here. The 48-megapixel primary sensor on the Reno 2 is a Sony IMX586 sensor, while the 48-megapixel camera on the Reno 2F is a Samsung Isocell Bright GM1 sensor.

While both handsets have a motorized 16-megapixel sensor in front, the higher-end OPPO Reno 2 has the signature shark-fin design while the Reno 2F’s look is identical to the OPPO F11 Pro‘s, which pops up from the top center of the smartphone.

The Reno 2 also gets several shooting modes to express your creativity. These include Ultra Dark Mode (using the processor’s NPU), Ultra Macro Mode, Ultra Steady Video (using the ultra-wide-angle camera), as well as adding bokeh while shooting video using either the front or rear cameras. (Goodness, guys! The Reno 2 can really shoot in the dark and take super-steady videos! We’ll show you in a few. — AUG)

Screen size isn’t vastly different, either. The Reno 2 has a 6.55-inch Dynamic AMOLED display with a 20:9 aspect ratio and a 2,400 x 1,080 resolution. It’s protected by Gorilla Glass 6 in front and Gorilla Glass 5 on the back. The OPPO Reno 2F has a slightly smaller 6.53-inch AMOLED display with a 19.5:9 aspect ratio and Gorilla Glass 5 protection for both the front and the back of the phone. Both devices have an under-display fingerprint sensor and offer face unlock as well.

The OPPO Reno 2 is powered by a Qualcomm Snapdragon 730G coupled with 8GB of RAM and 256GB of fast UFS 2.1 storage. Meanwhile, the Reno 2F runs on a MediaTek Helio P70 processor (which also powers the F11 Pro) and pairs this with 128GB of storage. Both offer microSD expansion of up to 256GB. But the Reno 2 shares the microSD card slot with the second SIM, while the Reno 2F gets a dedicated slot.

Besides introducing the new phones, the company also launched the OPPO Enco Q1 wireless earphones. These noise-cancelling headphones feature a 3D neckband design that’s thick at its end and thin at the center (which goes around your nape).

OPPO uses dual-active noise-canceling technology with the Enco Q1. It has four microphones for both feedback and feedforward dual-active noise cancellation. It’s designed to cut out ambient noise, so you can focus on what you’re listening to. The in-ear earbuds curve at a certain angle, so it fits into your ear comfortably.