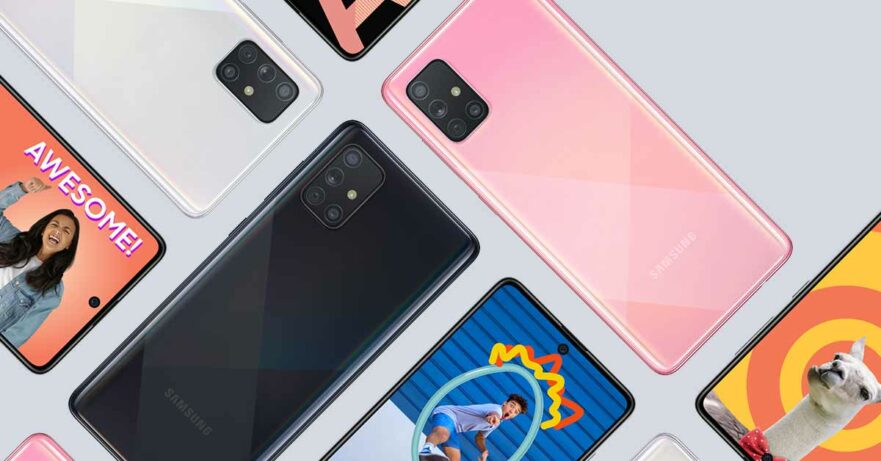 Samsung quietly announced the Galaxy A71 alongside the Galaxy A51. This Galaxy A70 successor also features the same design as the follow-up to the Galaxy A50. It has the same L-shaped rear camera setup with the new macro sensor and the Infinity-O display with the center punch hole.

(Update, January 22: This Galaxy will be launched in the Philippines! Read Samsung Galaxy A71 Philippine preorder to start soon.)

The Galaxy A71 has the same 6.7-inch Super AMOLED display as its predecessor. But as we mentioned, it swaps out the Infinity-U notch for the Infinity-O one. It also has an in-screen fingerprint reader and the Glasstic material that changes the color of the back panel, depending on how the lights hit it. The phone will be available in Prism Crush Black, Silver, Blue, and Pink colors.

Samsung didn’t specify what processor the company used for the smartphone, but it says the Galaxy A71 has a dual 2.2GHz + hexa 1.8GHz octa-core processor. It could be the Qualcomm Snapdragon 730, which we’ve seen on the likes of the Samsung Galaxy A80 and the Xiaomi Mi 9T.

The handset also comes equipped with either 6GB or 8GB of RAM and 128GB of storage. It retains the 4,500mAh battery with support for 25-watt fast charging.

The Korean manufacturer didn’t say if the Samsung Galaxy A71 comes with Android 10, but because the Galaxy A51 has been launched with the latest Android version, we’re assuming that it does. Unfortunately, Samsung also didn’t divulge when the Galaxy A71 will be available or how much the phone will be. But we will keep you posted if we hear about a possible Philippine launch.