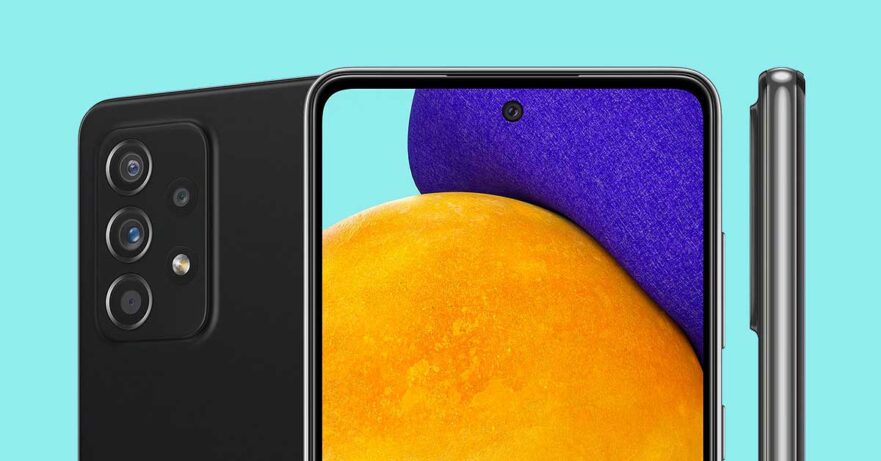 The upcoming Galaxy A52 5G is one of the most highly anticipated midrange phones from Samsung, all thanks to its rumored features. It’s expected to launch in the first half of 2021 — or maybe even sooner.

(Update, February 21: Click here for the supposed specs and prices of the Samsung GalaxyA52 5G and 4G models!)

Recently, new 360-degree image renders have surfaced courtesy of reliable industry leaker Evan Blass (@evleaks), showing the Samsung Galaxy A52 5G from all sides in four different colors. It is said that the Galaxy A51 successor will be available in Amazing Black, Amazing White, Amazing Violet, and Amazing Blue, and the sides of each variant will match the color on the back, as well as the main camera module.

In terms of design, the rear camera of the Galaxy A52 5G should resemble its predecessor’s, except the color of its housing will depend on the colorway of the handset. However, the position of the secondary sensor next to the LED flash has changed.

The front panel — likely a 1080p Super AMOLED affair with an in-screen fingerprint scanner — is very much the same, sporting a punch hole at the center for the selfie camera. All the physical buttons are on the right-hand side, as expected from a Samsung unit. Meanwhile, the bottom seems to have a headphone jack at the bottom, which is always nice to see on a mid-tier device.

As for the internals, the Samsung Galaxy A52 5G reportedly packs a Qualcomm Snapdragon 750G chipset, which shares the same Snapdragon X52 5G modem as the Snapdragon 765G and supports sub-6GHz and mmWave spectrums as well for global 5G compatibility. The Galaxy A42 5G that launched in the Philippines late last year uses a Snapdragon 750G, too.

The phone is expected to run the latest One UI overlay built on top of Android 11, alongside 6GB or 8GB RAM and up to 256GB of internal storage. Samsung will allegedly target a $450 price tag for the base model at launch, which translates to roughly P21,617 converted. The Galaxy A51 was originally priced at P17,990 ($374) in the Philippines, but take note this was for the Exynos-powered 4G variant.