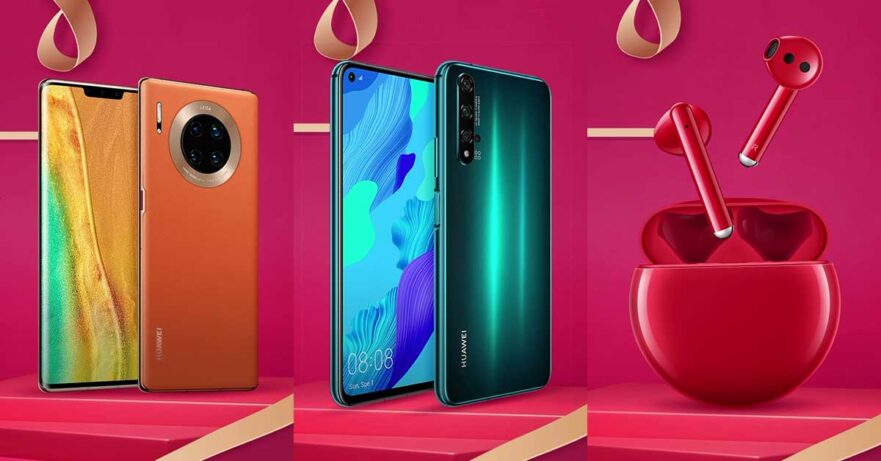 You’re in luck. Many companies are offering good deals this Valentine season. Huawei Philippines, for one, has a Together 2020 All For Love campaign, which will run from February 8 to 21. From phones to smartwatches, chances are there’s something in it for you.

Besides discounts, what’s great about the promo is that there are new products included here. We’re talking about the Huawei Mate 30 Pro 5G, the Huawei Nova 5T in Crush Green, and the Huawei FreeBuds 3 in Valentine Red.

Currently image-quality-rating organization DxOMark’s top-ranked camera phone, the Mate 30 Pro 5G will be launched in the Philippines tomorrow, February 6. It’s going to be the first 5G-ready phone in the country.

What’s its difference with the 4G version? The Huawei Mate 30 Pro 5G uses a more powerful and more battery-efficient Kirin 990 5G system-on-chip instead of the other model’s regular Kirin 990 processor. The former is the world’s first flagship 5G SoC powered with 7nm+ EUV2.

The smartphone will still be sold for P55,990 (around $1,102), its suggested retail price. However, you’ll get free 50GB of Huawei Cloud Storage for the first three months and 1,200 Huawei points if you buy it within the promo period.

Besides the two smartphones, the red Huawei FreeBuds 3 will likewise be part of the Together 2020 All For Love campaign. The truly wireless earphones will be offered for less for a limited time. They are going to be priced at P6,990 ($138), down from P8,990 ($177).

We already compared the FreeBuds 3 with the Apple AirPods 2. And as we said in our comparison, it’s an easy choice if you’re after better value for your money.

You can see all the Huawei Philippines deals below — provided by the company itself.