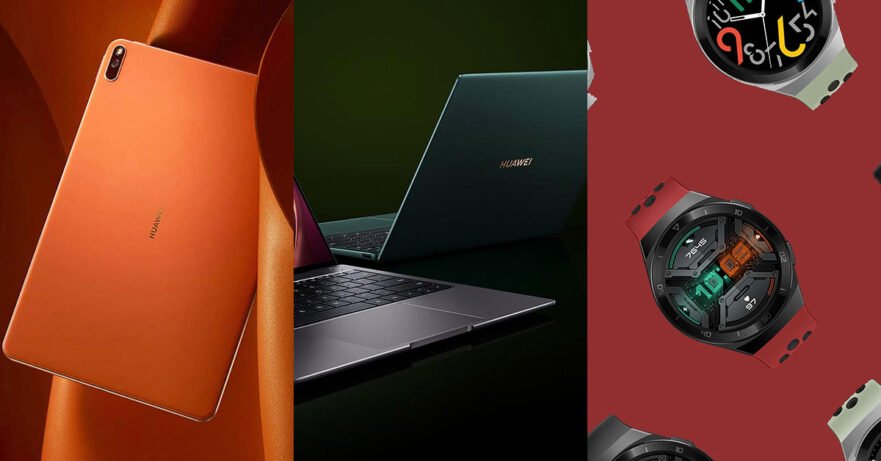 Huawei has launched three new devices in the Philippines amid the extended lockdown in most parts of the country that has forced retail stores to close or scale down their operations drastically for fear of COVID-19 spread.

Due to the ongoing quarantine in the Philippines, the newly launched devices are only available online for now. You can buy them from Lazada, Shopee, and MemoXpress.

You’ll find the prices of the new devices below.

The Watch GT 2e is available for purchase starting today, while the MatePad Pro and MateBook X Pro are still up for preorder.

On Lazada and Shopee, those who buy the Huawei Watch GT 2e early will receive an additional watch strap and an umbrella; the bundle is valued at P1,190 ($24).

Meanwhile, early adopters of the Huawei MatePad Pro are entitled to a preorder freebie package worth P14,980 ($296). They’ll receive a Huawei smart keyboard case, a Huawei M-pencil stylus, a Huawei CM510 Bluetooth speaker, plus VIP service at Huawei service centers across the country.

The Huawei MateBook X Pro also comes with P14,980 ($296) worth of free items, including a pair of Huawei FreeBuds 3 true wireless earbuds, a laptop bag, a mouse, and a Huawei SoundStone Bluetooth speaker.

For the MatePad Pro and MateBook X Pro, you need to complete your payment by April 24. Lazada and Shopee mention that shipping will be completed within 36 days from today.

Local retailer MemoXpress also has the MatePad Pro, MateBook X Pro, and Watch GT 2e on offer, albeit with slightly different freebies for the tablet and laptop.

MemoXpress has the same set of freebies for the watch as Lazada and Shopee. The MatePad Pro comes with a Huawei smart keyboard case, an M-pencil, a Band 4, and an exclusive reward from Huawei’s Member Center app — valued at P15,880 ($314). The MateBook X Pro, on the other hand, is bundled with a pair of FreeBuds 3, a backpack, and a Bluetooth mouse. They are altogether worth P11,990 ($237).

Huawei MatePad Pro, Huawei MateBook X Pro, and Huawei Watch GT2e launch in the Philippines, in case you missed it

The Huawei MatePad Pro is a 10.8-inch Android tablet with a huge LCD screen running at 2,560 x 1,600 pixels. And, yes, it’s different from the MatePad Pro 5G, which offers fast data connectivity on compatible 5G networks.

Unlike most tablets and previous iterations in the MatePad family, the Pro has small bezels on the sides and a punch hole for the front-facing camera. The display is also compatible with Huawei’s M-pencil stylus, which the company says “writes naturally like a pencil on paper” and boasts 4,096 levels of pressure sensitivity to capture every nuance of the stylus’ interaction with the tablet.

Additionally, the M-pencil pairs automatically and attaches magnetically to the side of the slate while charging it wirelessly. The stylus is sold separately. Another accessory you can purchase for the Huawei MatePad Pro is the company’s smart magnetic keyboard that delivers 1.3mm of travel — more than the shallow butterfly switches of some MacBooks. It also supports the tablet at two angles, making it look like a makeshift laptop.

Like the Mate 30 series and P40, the Huawei MatePad Pro is powered by a Kirin 990 chipset and runs EMUI 10 based on Android 10 with Huawei Mobile Services and AppGallery for downloading and updating apps. The AppGallery is the third-largest app store in the world with 1.3 million developers on board and 400 million active monthly users in 170 countries.

The battery is rated at 7,250mAh and supports fast charging. For taking pictures and shooting video, Huawei’s latest slate is equipped with 13- and 8-megapixel rear and front cameras.

The MateBook X Pro is the company’s new flagship laptop powered by the latest 10th-gen Intel Core i5 and Core i7 processors. It’s also bundled with 512GB or 1TB SSD storage and discrete Nvidia GeForce MX250 graphics, which will be replacing the low-power Pascal GPU, the GeForce MX150.

On the outside, the laptop looks sleek and premium, especially the Emerald Green color variant. It’s available in gray and silver colors, too. The Huawei MateBook X Pro likewise comes with a 13.9-inch 3K touchscreen and an aspect ratio of 3:2. The display covers the full sRGB color gamut for more accurate and rich colors.

Port selection is fine for a portable high-end laptop — you get two USB-C ports, a USB-A port, and a 3.5mm headset and microphone combo jack.

Like the MateBook D 15 and other Huawei notebooks, the MateBook X Pro has a power button that doubles as a fingerprint reader and a recessed webcam which you can access from the keyboard and only pops up when needed.

Huawei says the Watch GT 2e is designed “to inspire an active lifestyle.” As such, its latest smartwatch includes a new SpO2 monitor for measuring your blood oxygen’s saturation and supports 100 workout modes ranging from traditional sports to trendier forms of exercise like Rock Climbing and Parkour.

The Huawei Watch GT 2e has a 46mm circular watch face with a 1.39-inch AMOLED touchscreen supporting a retina-grade resolution and always-on function. In keeping with the sporty theme, it also comes with sportier-looking side buttons alongside a perforated watch strap.

Similar to other models in the GT 2 series, the GT 2e packs a two-week battery and can store up to 500 songs on its internal memory. Pairing is done via the Huawei Health app, and the Watch GT 2e is compatible with devices running Android 4.4 or above and iOS 9.0 or newer.