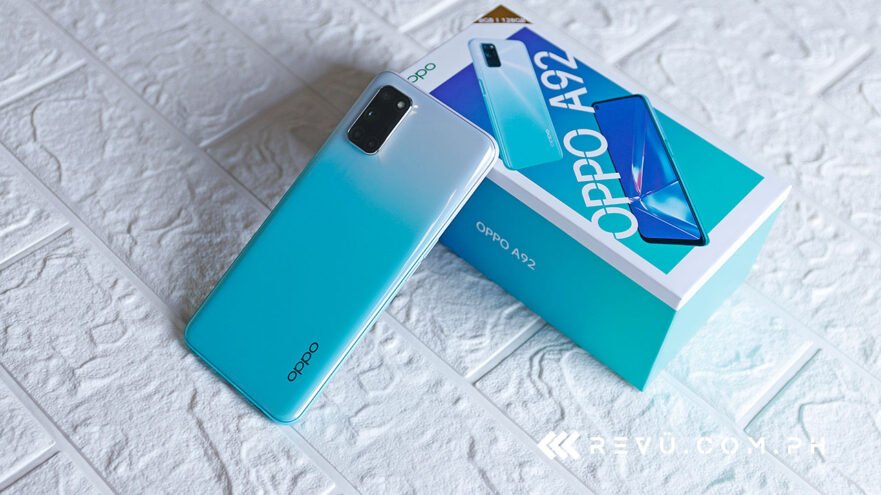 We reported last week that the OPPO A92 is set to release in the Philippines soon. It’s the latest entry in the A series and the sequel to last year’s OPPO A9 2020, which launched here with a suggested retail price of P15,990, or around $318 after conversion.

(Update, June 17: And we have a launch date! Visit this page for the information. On that day, OPPO Philippines will be giving away some prizes!)

Like the phone before it, the OPPO A92 arrives with a quad camera on the back and a long-lasting 5,000mAh battery. It’s also powered by the same Qualcomm Snapdragon 665 chipset found in the previous model and has 8GB RAM and 128GB of built-in storage, with room for more via a microSD card. The notable similarities end there, though, and we’re pleased to say that there’s more new here than old or familiar.

We’ll be sure to cover everything important in our full review, which we’ll publish soon. For now, we’ll share our first impressions of the device here. But before we get to the phone, let’s take a look at the box the OPPO A92 ships with.

First of all, wow — the packaging looks pretty, like the phone. Our review sample, which is the Shining White variant, arrived in a cardboard box that matches our unit’s stunning colorway. It’s green and white, has a touch of blue on the sides, and features a render of the A92 along with the OPPO logo and the memory configuration.

Not that it bothers us, but the box is a little bigger than we’re used to. It doesn’t actually represent the size of the handset inside, or the number of accessories OPPO bundles in the box.

See below an overview of what’s inside the OPPO A92 retail box:

The box contents are expected at this segment, but also includes two noteworthy accessories, namely an 18-watt adapter for fast charging and a nice-looking pair of wired earbuds with OPPO-inspired green accents. The bundled charger is a huge upgrade from the 10-watt power brick of the OPPO A9 2020 and should translate to quicker charging times given the status quo in the battery department.

We suspect that it’s about two times faster, but we’ll confirm once we’ve put the device through its paces. Take note that it takes the A9 2020 three hours to fully recharge from zero using the included charger and cable. Also: You’ll need both the accessories that came with the phone to enjoy the maximum charging speed it supports.

Easily the most striking about the OPPO A92 is its design — our Shining White unit, in particular, is a stunner and we have a bunch of pictures to show it. The outside of the phone is made of plastic and has a glossy finish on the rear panel, whereas the frame is matte. As usual, the back side is curved towards the edges on all sides, making it comfortable to hold and carry.

More than that, there is a nice gradient coloring on the back and sides, where the bottom part is a solid aquamarine and turns white as you get to the top section above the main camera module. It’s pleasing to look at and gives the A92 character and style without going overboard on the finish.

Besides the gradient, the OPPO A92 also gives off a rainbow-like reflection under certain conditions, making it look even more unique and eye-catching. The new two-tone aesthetic is sure to turn heads and, hopefully, make other manufacturers sit up and take notice. But more importantly, this phone looks as fresh as the paint that cloaks it — and we certainly wouldn’t mind if the company repeats the same design choice for its future flagships.

The main camera system, which goes up to 48 megapixels for the maximum image size, is housed in a rectangular module that leaves a slight bump on the back. It has four lenses and a pretty strong camera flash for closeup night shots. Without the case on, the shape and thickness of the module will make the device wobble if placed on a flat surface.

The right-hand side houses a fingerprint reader that doubles as a power button, while on the opposite side, you’ll find separate volume keys for up and down, as well as a SIM and memory card tray that requires an ejector tool to access. The A92 can support two SIM cards and a microSD card at the same time.

As for the fingerprint scanner, it works really well — fast and accurate, and we barely ever had any failed attempts to unlock the screen. There’s face ID, too, thanks to the front-facing camera, although you’re likely better off with the physical sensor most of the time, especially when using the phone in a low-light environment.

Moving to the front, the screen retains the same 6.5-inch LCD as its predecessor, but the resolution has been bumped up to 2,400 x 1,080 pixels from 1,600 x 720 on the previous model. It’s a notable improvement given the display size. But more than that, the A92 delivers a (mostly) full-screen experience with no notch or chunky bezels we’ve seen on other midrange devices.

That being said, the punch hole at the upper left still leaves a bit to be desired. It’s quite noticeable, and there is a bit of a shadow around it. Neither affects performance nor changes how apps behave on the screen, which is a good thing.

The base of the phone includes a 3.5mm audio jack, a USB Type-C port, and a single speaker, which is surprisingly loud for its size and has no problem filling a small room with intelligible dialogue when streaming videos from apps like Netflix and YouTube.

As mentioned earlier, the A92 uses a Snapdragon 665 and runs OPPO’s latest Color OS 7.1 custom overlay based on Android 10 out of the box. The Snapdragon 665 is an entry-level chip in the series, but that doesn’t mean it can’t handle demanding games as well as most productivity and work tasks. Just don’t expect high frame rates and silky-smooth performance in general.

The 5,000mAh battery, on the other hand, should be able to easily get you through a full day of heavy usage, including lots of picture-taking and Netflix and YouTube streaming, with some juice left for the next day.

We’ll be testing out the OPPO A92 more and share our observations in our full review. So, check back in a couple of days to find out if this new — and very attractive — midranger has the substance to match its style.