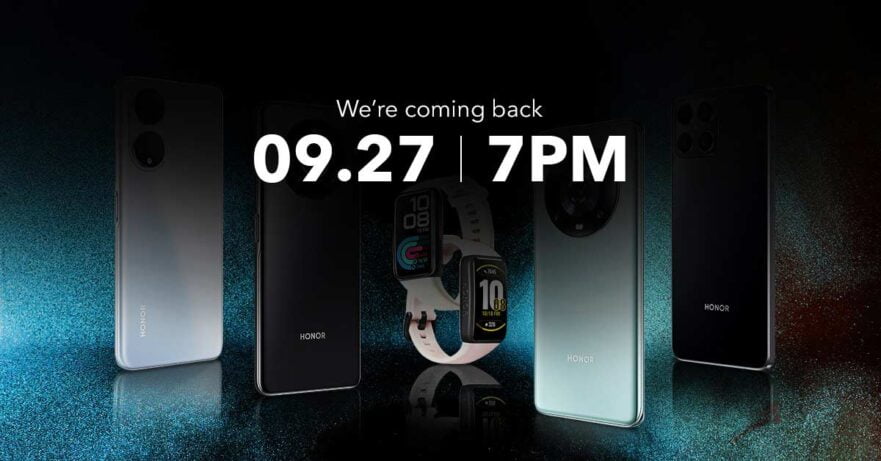 This is it! More than a month after announcing that it’s coming back to the Philippines, former Huawei sub-brand HONOR has finally revealed the launch date of its first set of offerings.

In a press release sent to us at Revü, the company has disclosed that the date to watch is September 27. And even better? We can now confirm that HONOR Philippines will initially offer six products. Four of them are smartphones; one is a smart band; and another one is a smartwatch. It looks like the HONOR 70, which just debuted at IFA 2022, will be part of the second batch of devices to launch locally. Read on.

So we were right; the HONOR Magic4 Pro is indeed coming to the Philippines.

The Magic4 Pro likewise gets an IP68 water- and dust-resistance rating and runs Android 12-based Magic UI 6 with access to Google Mobile Services out of the box.

To fill the low and midrange categories, HONOR will release these three X series smartphones.

The HONOR X7, HONOR X8, and HONOR X9 are all powered by a Qualcomm Snapdragon 680 4G chipset, the same SoC that’s used by handsets such as the Vivo Y35 and Realme 9. They also pack a 90Hz IPS LCD screen, a rear camera setup with four cameras each, a fingerprint sensor on the side; and Android 11-based Magic UI 4.2 with GMS. We wrote more about this trio, including the prices abroad, here.

These wearables are all set to be launched in the country, too.

The HONOR Band 6 features these highlights: a big AMOLED screen measuring 1.47 inches; up to 14 days of battery life; all-day blood-oxygen-level, heart-rate, and sleep monitoring; 10 professional workout modes; and watch-face customization. It’s the only product we’ve spotted with a price online. Apparently it will cost P1,990 (roughly $34).

The classy-looking HONOR Watch GS 3, on the other hand, has the following key features: a curved screen that’s slim at just 10.55mm thick; an 8-channel heart-rate AI engine whose accuracy is pegged at more than 97%; up to two weeks of battery life, with 5 minutes of charging the smartwatch letting you use it for one whole day; blood-oxygen-level monitoring; and dual-frequency GNSS for precise positioning.