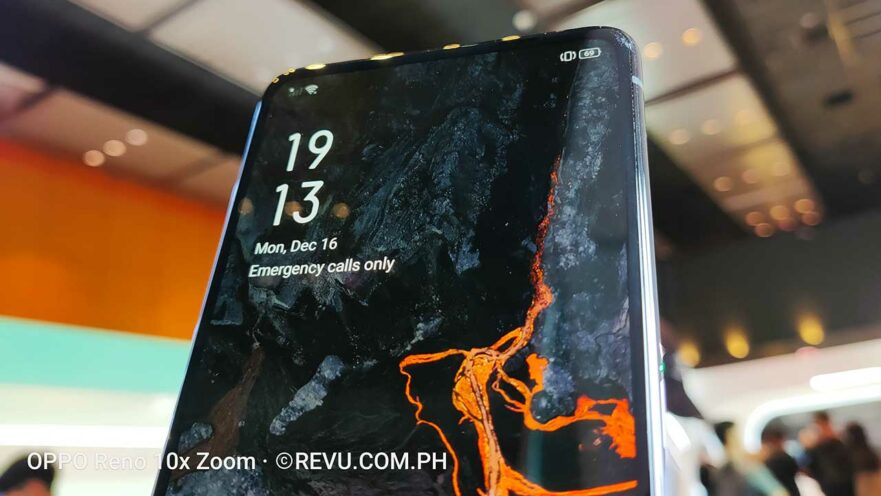 Minimalism, it seems, is the theme that’s emerging so far with concept smartphones. And now we have OPPO joining the fray with its own take on a non-commercial phone of tomorrow, with an under-display camera it unveiled back at MWC Shanghai 2019 in June and no notches, cutouts, or holes of any kind.

(December 19: You may want to read this related article: How OPPO is preparing for the 5G era in Asia-Pacific.)

At the recently concluded OPPO Asia-Pacific Region Hub launch in Malaysia, which manifests its commitment to APAC, the brand showcased a prototype to members of the press in attendance. Watch the video below to get a sneak peek at the future of smartphones.

Raw video showing OPPO’s concept phone. Our first look, before we even got more details about it…

No notch, no cutout, no pop-up — and no compromise!

Perhaps the most impressive thing about OPPO’s concept device is that the camera is almost entirely invisible and virtually impossible to make out when the screen is black or turned off. In fact, it’s hard to get a clear shot of the phone’s front-facer.

The camera module is lodged behind the OLED display, and the panel itself doesn’t seem to affect camera performance much. It’s also worth mentioning that the screen pixels above the camera are physically bigger than those on the display to let in more light and allow for brighter low-light shots.

For an early version of the technology, it’s impressive, hands down. Our indoor selfies turned out decent, so this particular setup should work well for those who hate the notch and the punch-hole cutout. Unfortunately, OPPO says it might take a while for its under-screen camera to make it to a commercial product since it wants to perfect the tech first — and perhaps make the camera even more inconspicuous — before deploying it on its phones.

The Xiaomi Mi MIX Alpha and Vivo APEX don’t have any physical buttons. OPPO didn’t take the same route as its competitors did, but it has taken a step closer to a button-free design with its own prototype.

The power button is built into the chassis on the right-hand side, while the volume rocker is a touch-sensitive area on the left side that can be activated by sliding your finger up and down within the pad. It’s similar to what you find on the Huawei Mate 30 Pro and Vivo NEX 3, both flagships of their respective brands.

There are no ports or holes on OPPO’s prototype. This means no headphone jack, no earpiece speaker and loudspeaker grill, and no removable card tray for a physical SIM and storage expansion.

We’re sure you’re already familiar with the first concession; Apple infamously killed off the headphone jack a while ago. To generate sound for media playback and voice calls, the screen will vibrate rather than letting it pass through a traditional speaker.

To generate sound for media playback and voice calls, the screen will vibrate. OPPO has also ditched the SIM slot for an eSIM for cellular service

The OPPO concept phone has also ditched the SIM slot for an eSIM for cellular service. The latest Apple iPhones and Google Pixels, the Samsung Galaxy Fold, and Motorola’s new RAZR are just some of the phones that use an eSIM now.

Finally, the OPPO prototype doesn’t have a port for wired charging. Wireless is the way of the future, and this smartphone fully embraces it. Using OPPO’s new Wireless VOOC Flash Charge technology, the battery can be recharged at a maximum of 30 watts. This is one of the fastest wireless charging we’ve seen in a device so far.

Wireless is the way of the future, and this phone fully embraces it. Using OPPO’s new Wireless VOOC Flash Charge technology, the battery can be recharged at a maximum of 30 watts. Fast wireless transfer is also onboard

Fast wireless transfer is also onboard, and this allows data transfer speeds of up to 20Mbps, which is plenty fine for super-high-resolution pictures, videos, and other heavy files.

Will we see this concept phone realized soon?

Probably, yes, in some form. But we also won’t be surprised if it gets delayed until the next year. We don’t think the market is ready for a device that is limited to wireless charging and wireless transfers, at least not right now.

The under-display camera looks promising, though, and we are excited about it. We can definitely see OPPO adopting it for its future high-end handsets. The latter half of 2020 or the year 2021 could be when it’s realized in a commercial product. Until then, we’ll have to put up with notches and cutouts designed into smartphone screens.