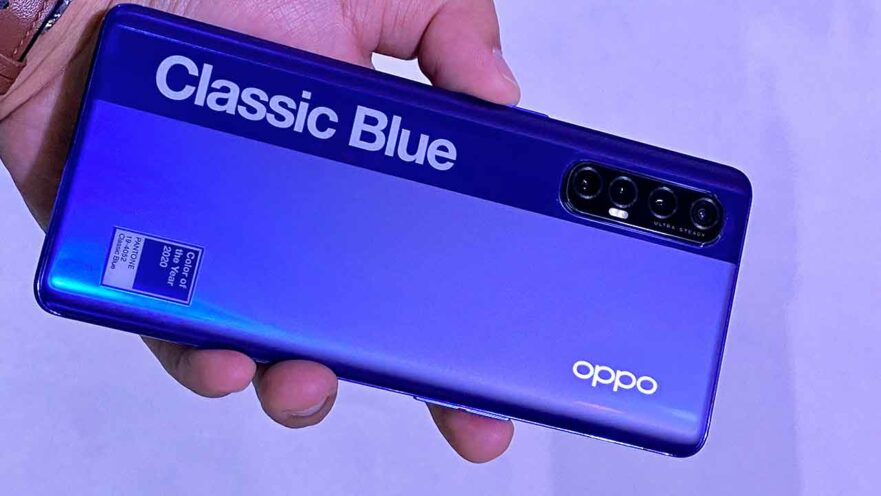 OPPO‘s newest midrange smartphones — the OPPO Reno 3 and Reno 3 Pro — are the first in the Reno series to offer 5G connectivity and Android 10-based ColorOS 7 out of the box.

(Update, March 13, 2020: The series is launching in the Philippines! Read OPPO Reno 3, Reno 3 Pro coming to the Philippines soon. Plus check a specs comparison between their global variants.)

(Update, February 22, 2020: The 4G version of the Pro model is already up for preorder 10 days before its March 2 debut. Read OPPO Reno 3 Pro 4G up for preorder in IN. Specs, rumored price here.)

Both smartphones share a quad-camera setup on the back; the same Moonlight White, Moonlight Black, Bluestarry Night, and Sunrise Impression color variants; up to 12GB of RAM; an OLED screen with an optical fingerprint scanner; and a big battery with support for new fast-charging technology from OPPO.

The OPPO Reno 3 and Reno 3 Pro are also the company’s first smartphones to be powered by new chips — MediaTek’s Dimensity 1000L 5G and Qualcomm’s Snapdragon 765G, respectively. Let’s take a look at each model individually.

The OPPO Reno 3 is the first next-generation smartphone to come with the MediaTek Dimensity 1000L. There are four Cortex-A77 cores and four Cortex-A55 cores in the CPU paired with a Mali-G77 GPU.

OPPO promises the Reno 3 will be 20% faster than something running with Cortex-A76 cores and that the device will be smarter with a custom APU 3.0 coupled with the processor.

The waterdrop notch on its 6.5-inch OLED display houses a 32-megapixel camera. The four cameras on the back include a 64-megapixel primary lens, an 8-megapixel ultra-wide shooter, a portrait camera, and a black-and-white sensor.

The OPPO Reno 3 comes equipped with a 4,025mAh battery with the improved VOOC 4.0 fast-charging technology. The upgraded tech charges the device from 0% to 50% in only 20 minutes and from 0% to 100% in just 56 minutes. Compared with the first version of VOOC, this one can fully charge a 4,000mAh battery in 73 minutes. We need to test it to confirm.

The OPPO Reno 3 Pro is the second smartphone to be powered by Qualcomm’s Snapdragon 765G chip after the Redmi K30 5G.

READ ALSO: How OPPO is preparing for the 5G era in Asia-Pacific and OPPO A91, OPPO A8 priced starting at around $171

There is a Pantone Color of the Year Classic Blue special edition with an 8GB RAM + 128GB storage configuration available for ¥4,199 (P30,441 or $600). It comes in a retail box with a white-and-blue motif and includes the similarly colored VOOC charger, charging cable, and predominantly white case. This version will also go on sale January 10th.

Unlike the non-Pro model, the OPPO Reno 3 Pro features a 6.5-inch OLED 90Hz display with curved edges and a punch hole on the upper-left side of the screen for the 32-megapixel selfie camera. The display supports HDR10+, features minimal bezels, and a 92.1% screen-to-body ratio.

At 7.7mm, the smartphone looks to be the thinnest dual-mode 5G phone in its price segment.

OPPO vice president and president of global marketing Brian Shen first teased the quad-camera setup on the back of the device. Staying true to the rumors, the Reno 3 Pro comes with a 48-megapixel Sony IMX586 primary sensor, accompanied by a 13-megapixel telephoto lens, an 8-megapixel ultra-wide-angle camera, and a 2-megapixel monochrome sensor. It supports 5x hybrid zoom, which includes 2x optical zoom and the rest done digitally.

As the company already confirmed, the OPPO Reno 3 Pro also has a 4,025mAh battery with enhanced 30-watt VOOC 4.0 fast-charging technology.

All images via Weibo