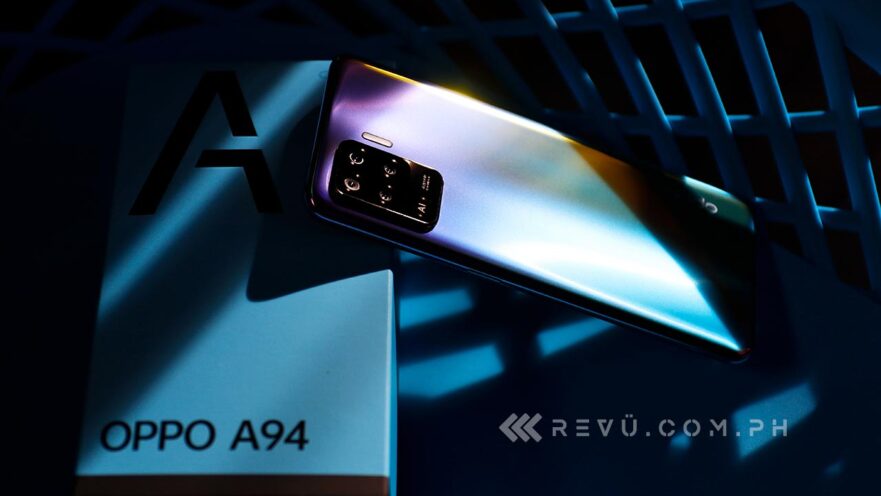 On March 26, the OPPO A94 will finally break cover in the Philippines alongside the OPPO Reno 5 Marvel Edition. The follow-up to the A92 (the A93 wasn’t released locally) will introduce a new AMOLED panel with fingerprint-sensing and always-on capabilities and faster wired charging up to 30 watts, while retaining some key features, including an attractive polycarbonate back and quad cameras led by a 48-megapixel sensor.

(Update, March 28: The OPPOA 94 is now available in the Philippines! Is it the phone for you? Read our review of the model that’s known in other markets as the OPPO Reno5 F, OPPO Reno5 Lite, and OPPO F19 Pro here.)

While there was no official confirmation, the listing at the brand’s official store on Lazada Philippines shows the A94 is priced at P13,999, or around $288 converted, making it cheaper than its predecessor at launch. It’s also OPPO‘s most affordable handset with a full-featured AMOLED screen, which is better suited for gaming and viewing content; hence, the A94’s local positioning as an affordable mid-tier phone offering decent gaming and multimedia specs. Does it deliver on the hype? It’s too early to jump to a conclusion yet, but here are our initial impressions for the time being.

The OPPO A94, owing to its plastic construction, is slim and pretty lightweight at just 172 grams. The screen measures 6.43 inches diagonally, so it’s not too small or too big for comfortable single-handed use; we can wrap our fingers around our unit just fine. The overall size and dimensions, plus the subtle curves on the sides of the phone, lend well to fitting into your palm without any discomfort.

In typical OPPO fashion, the power button is housed on the right edge, opposite the volume rocker along the A94’s left flank. There is no physical fingerprint reader here; the fingerprint scanner is embedded into the screen — so it’s convenient to unlock the device with either hand. In comparison to its predecessor on the local market, the OPPO A92, that phone had a side-mounted sensor that favored right-handed users. The fingerprint-sensing area is sufficiently sized and, per usual, located near the bottom of the display.

The top edge has no buttons or ports. At the bottom, you’ll find the OPPO A94’s USB-C port flanked by a standard audio out for your wired earphones and a single, down-firing speaker. It can get sufficiently loud, if you’re streaming music, watching a movie or series, or listening to a podcast. The vocals are clear, and we don’t have many complaints about the sound quality at sensible volume levels either.

As for the design, our Fantastic Purple review unit adopts a gradient metallic purple/blue paint job with a glossy finish on top, which extends to the sides for better aesthetics and visibility. The back also features a rectangular camera cutout and a dual-flash unit. OPPO has equipped the A94 with a 48-megapixel, f/1.7 camera alongside an 8-megapixel ultra-wide option and a pair of 2-megapixel sensors for macro and portrait shots — for a total of four rear cameras, virtually unchanged from the A92’s camera setup.

The biggest change can be found on the front, where the A94 upgrades to a 6.43-inch FHD+ AMOLED panel with small bezels and 60Hz refresh. The picture quality is obviously not on a par with the flagship OPPO Find X3 Pro’s, but it’s a noticeable jump in vibrancy and black depth if you’re coming from an LCD screen. Besides an under-display fingerprint scanner, the OPPO A94 also boasts always-on functionality, letting you check the date, time, battery level, and alerts without unlocking the device.

HD video streaming is supported on Netflix, Amazon Prime Video, and similar platforms because the smartphone boasts Widevine L1 certification out of the box. 4K HDR playback at 60 fps is available on the YouTube app as well, if you have a fast-enough internet connection.

Another important change concerns the internals. OPPO has opted for a MediaTek Helio P95 chipset paired with IMG 9XM-HP8 graphics, 8GB RAM, and 128GB of native storage, as opposed to sticking to the Qualcomm Snapdragon 665 inside the A92, or upgrading to a newer Snapdragon 600 series SoC altogether.

Some might not be happy that the A94 isn’t using a faster Qualcomm silicon, and we certainly can’t blame them for that concern. The Helio P95 uses an older design, so you’re not going to see groundbreaking frame rates and benchmark scores here. But it’s not a bad chipset, especially paired with 180Hz touch sampling in gaming or performance mode to make games feel much more responsive.

Genshin Impact, which we think is the most demanding mobile game out there today, can occasionally run at higher-than-30 fps at low settings (and assuming the fps is set to 60), but the sweet spot here is 30 or less. Local favorite Mobile Legends: Bang Bang supports HFR or High Frame Rate mode to deliver a smoother visual experience.

When it comes to real-world performance, the P95 is more than enough for basic smartphone tasks, such as web browsing, streaming, social media, and photography. From time to time, it may be when there are plenty of things going on in the background, but not too frequently to irritate you. OPPO’s new and improved Android 11-based ColorOS 11 operating system definitely helps keep the user experience consistently smooth.

The A94 packs a 4,310mAh battery, down from the 5,000mAh cell inside the A92. The good news is that OPPO has upgraded the charging speed on the latest model, up to 30 watts using the included VOOC Flash Charge 4.0 power brick. The company says a quick, five-minute charge here should provide enough battery life to stream a standard-length movie. OPPO also introduces a Battery Guard feature that optimizes nightly charges to prevent prolonged overcharging while you rest.

We’ll publish our performance review of the A94 as soon as the embargo lifts, so do watch for that to find out if OPPO’s latest A series entry is worth your money. At least, from a gaming standpoint.

The time to #LiveLifeAtFullSpeed is here. Get set to stream and witness the unveiling of the all-new #OPPOA94 on March 26, 2021, 7pm via Facebook, Youtube and LazLive!